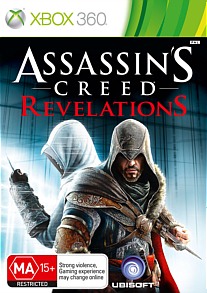 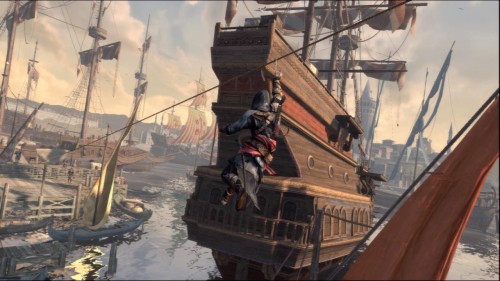 Story:
Assassin’s Creed Revelations picks up where Brotherhood left off, Desmond is now in a comatose state with his mind trapped in the animus. All he can do is talk to the likewise trapped Subject 16 or follow the rest of Ezio Auditore’s memories in an attempt to awake from the animus. And that is just one of the several simultaneously ongoing plotlines within Revelations, each of which for spoilers sake, I will not go into too great detail recounting. But what sets this title’s story apart from it’s predecessors?

Revelations as a story is more akin to literature than any other game on the market right now (besides Alan Wake perhaps) and it wears that literary love close to it’s chest. What with a large portion of the storyline focused around uncovering books and a heroine whose passion is literature, it is clear that the story structure used is very much like that of a great novel. Each DNA sequences plays out like a well written chapter, in an epic tale. An epic tale that is not only moving, but emotionally rewarding for those who have followed the series this far.

The main over-arching message of Revelations is that while life may hold many secrets, not all questions need to be or can be answered. Sometimes some things are best left for the people who come after you to discover. After finishing the story mode of the game I was left with many questions, but satisfied knowing that while I do want to have those questions answered – the adventure of life isn’t about learning all there is to learn, it is about learning that you can not learn everything. 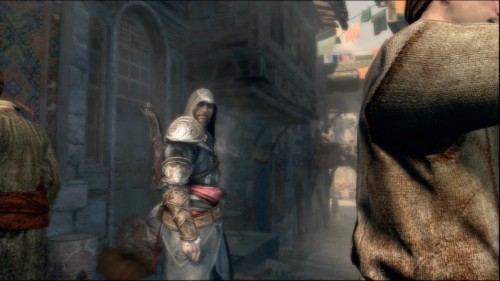 If there is one thing that differentiates the plot of Revelations to that of the previous Assassin’s Creed titles, it is that it feels so much larger in scale. One could say that it is epic. That one would not be wrong. Assassin’s Creed Revelations is epic, not only in it’s methodically plotted tale that can be called nothing less than a work of art, but also in it’s execution. It is clear that Revelations knows what it has to do and it does so with the finesse and touch of a literature great such as George Orwell.

Revelations will captivate you in every way imaginable. While this harrowing tale may be over, with a heavy heart Assassin’s Creed says farewell to Altair and Ezio as this swan song for the two Assassins comes to an end, doing both legendary characters the justice they truly deserve. You will leave this story satisfied that you had completed a journey that will not only stay with you for years to come, but also one that will affect you on a more deeper level than any other game to come out of 2011, it is just that damn good. 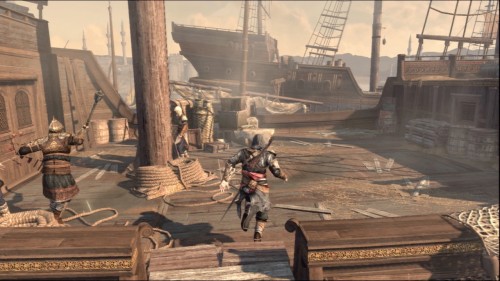 Gameplay:
It would be no stretch of a claim to say that there are simply no games on the market quite like Assassin’s Creed. With it’s unique blend of open-world environments, detailed combat, inventive weapons and items, well fleshed out plot and characters, innovative gameplay mechanics and unique concept, there is nothing even close to Assassin’s Creed.

Revelations takes the winning formula of the franchise and turns it completely on it’s head. Ubisoft have introduced new elements to gameplay that change the entire formula altogether, making Revelations like no other game in the series.

With the newly introduced Hook Blade, everything changes. Free-running is so much faster, with Ezio now able to jump further than ever before and travel takes roughly half the time it once did. Not only that but the Hook Blade and even the likewise newly introduced bombs, adds an extra level of depth to strategy, giving multiple possibile solutions to missions. 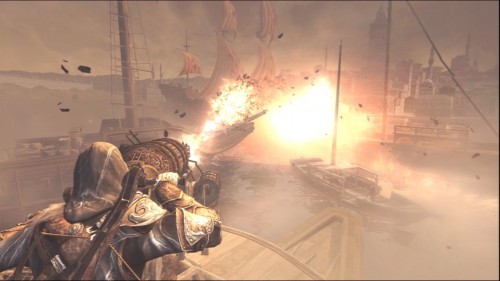 Missions are no longer linear, with each mission now having several different solutions and multiple ways to achieve the objectives. I personally found myself thinking outside the box in order to solve difficult missions, particular ones that necessitated quick thinking such as one which involved Ezio infiltrating an enemy fortress with the goal of assassinating it’s leader whilst going unseen by anyone. While this may seem like a simple enough mission for veterans of the series, there is now multiple ways to go about it. This added level of freedom allows for players to essentially play the game their way, whilst still completing objectives.

There are numerous other features added to Revelations that elevate it above any title in the series thus far, whether it be the Den Defense meta-game which could be an amazing XBLA title all by itself (I’d definitely buy that, get to work Ubisoft!), the Assassin Missions in which you manage your brotherhood of Assassins (like a sports team manager game, only deadlier) and send them on missions across the globe, a feature which returns from the previous title, however much improved with more to do or the incredibly unique Desmond Memories in which you play a first person platformer type game inside the core of the animus. There is just simply so much variety in gameplay and the amount of things to do is in a word, astonishing.