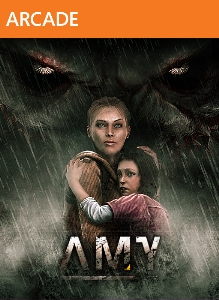 Overview
As one of the newest games of 2012, AMY was given tremendous amounts of attention. Unfortunately, this survival horror has not lived up to the generated hype for the vast majority of gamers. What could make this game so poor?

Story
Lana, our leading protagonist, has taken the role of babysitter for the young and mysterious child named Amy. The pair boarded a train destined to Silver City running away from a facility that seemed too interested in the child. While aboard the train, Lana becomes paranoid with the train guard that asks to see their tickets. All that we gather from conversation is that Amy cannot talk, it is Christmas Eve, and the guard is a potential creeper. After he passes, Lana is talking with a doctor that we assume must be the one that ordered Lana to retrieve the girl. The doctor mentions confronting Professor Raymond about Amy’s symptoms, but this upsets Lana. She repeats that she is taking Amy to the hospital for analysis but nothing with the professor. Amy begins drawing on her new art board becoming scared as the picture unfolds. 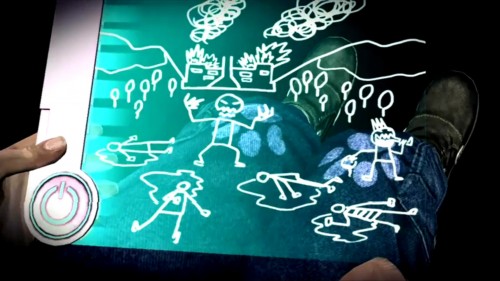 Lana becomes interrupted with the doctor looking at Amy’s new drawing. You see two angry beings atop several dead people next to a burning building. Both passengers are now staring out of the windows as a glimpse of surging bright light blinked outside. The doctor said it must have been an explosion near the Phoenix Center – where Amy was begin kept. Soon after the train begins to tip from side to side causing Lana to drop her cell phone. As she bends down to pick up the phone, the guard from before steps closer only this time he has changed. No longer looking human, the estranged being knocks Lana to the ground rendering her temporarily unconscious. As our protagonist awakes, she is wandering through a train wreck looking for clues and most importantly for Amy.

Gameplay
Waking from a concussive blow, you are free to navigate the train wreck in a third person view. Movement is control by the left analog in junction with a direction camera of the right analog. Interacting with the environment can be done with the use of (A). There are certain objects that can be manipulated during the course of the game, but pick-up items are limited to syringes, security keys, and weapons. Further interaction can be accomplished with carts, ladders, lockers, and even the occasional telephone. Thus far the game seems to be in working order as the basic controls work without too much problem.

One major issue I find in the game is with Lana’s combat items. Weapons are extremely limited to wooden boards in the beginning levels and other similar weapons as the chapters progress. I felt that unarmed attacks should have been made possible at the very least. You can essentially break a wooden board over an infected and be left with no weapon to fight with. Testing should have proved that a broken weapon with no alternatives is a major flaw that should be fixed. 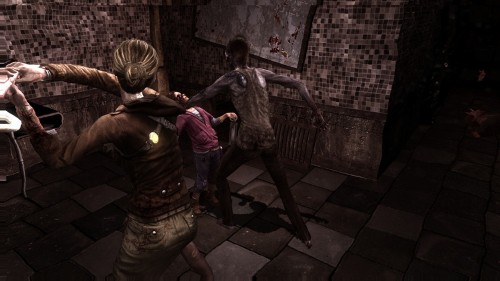 Now that we have discussed the limited combat items, the next topic is the actual combat system. Combat is based on two factors, attack and evasion. Holding the left trigger and pressing (X) offers a swing of the current melee weapon if available. Once in combat, your opponent may choose to attack or parry oncoming attacks. Lana is also able to parry by holding left trigger and pressing (B). With only these two factors, combat can become quite repetitive. If you attack too early or late, you will more than likely take damage. Trying to run away will score a hit on you, so do so with plenty of life. I would suggest the use of parrying instead of running away. After about three hits, you should be dead on the floor and restart from your last checkpoint.

Health is based upon the amount of blood on your screen. Since Lana is contaminated with the mutagen, the screen may become blurry and turn red after time passes being away from Amy. Syringes of anti-toxin prevent Lana from becoming a walking corpse. Amy likes to run away a lot, so your best bet is to go searching for syringes and stock up. 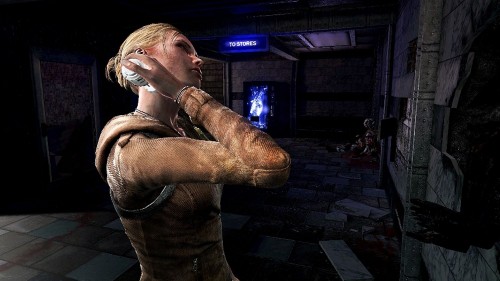 One aspect I keep remembering about AMY is dying a lot with the lack of checkpoints. Not being able to save your progress when you want increases the difficulty of the game and definitely increases the length of play for this title. Some chapters require rigorous tests of trial and error, and the penalty for failure is usually death. Restarting back to a checkpoint gets very tiring.

Audio/Visual
Environment visuals are acceptable and provide a “horror” theme. The problem that arises during the game is that I experienced a shaky frame rate. When moving the directional camera, I occasionally notice that there is a slow transition from one position to another. Beyond the frame rate issues, you are usually running down hallways occupied by pools of blood, broken glass, and a zombie set on killing you.

The art makes the game somewhat bearable. The models for our main characters Lana and Amy are tasteful but raise questions about Lana’s choice of footwear throughout the story. Those heels have to be killing her. As Lana strays from Amy and/or runs out of syringes, her facial features become pale and full of veins. The transformation signifies the need to find Amy or anti-toxin quickly or else die. 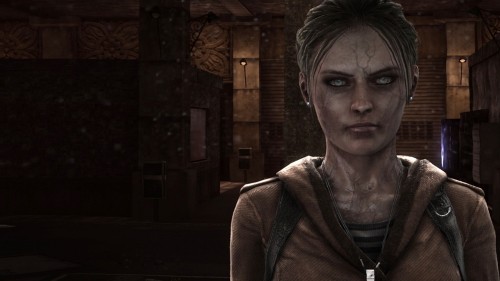 I’ve had a couple on-lookers say that Lana’s voice isn’t believable as Amy’s caretaker. The implications are simple that the actor was not in tune with the child running away, but there are agreeable moments that Lana is in distress. This feeling is prevalent as she is constantly in danger and preserving the child’s and her own life. Sadly, I am glad that the child is mute. I doubt any voice would be able to match the suitable silence of the mysterious child.

Overall
With some serious flaws, AMY does not present itself as well as the media does. The battle system is simple and plays out as a guessing game. Before you know it you’ll be lying dead in a pool of blood waiting to respawn at the last checkpoint you were at ten minutes ago. If this doesn’t scream “RAGE QUIT”, I do not know what will.

The models and environments are actually tasteful but cannot be fully appreciated. With a lagging frame rate, the environments occasionally become distorted. If you take the time to wander around the levels, you can tell the developers enjoyed designing each area.

Sadly, AMY does not yield a positive lasting impression. The story is diluted by a continuous test of trial and error. I really wanted to enjoy this survival horror, but collectively the game did not have a solid foundation.