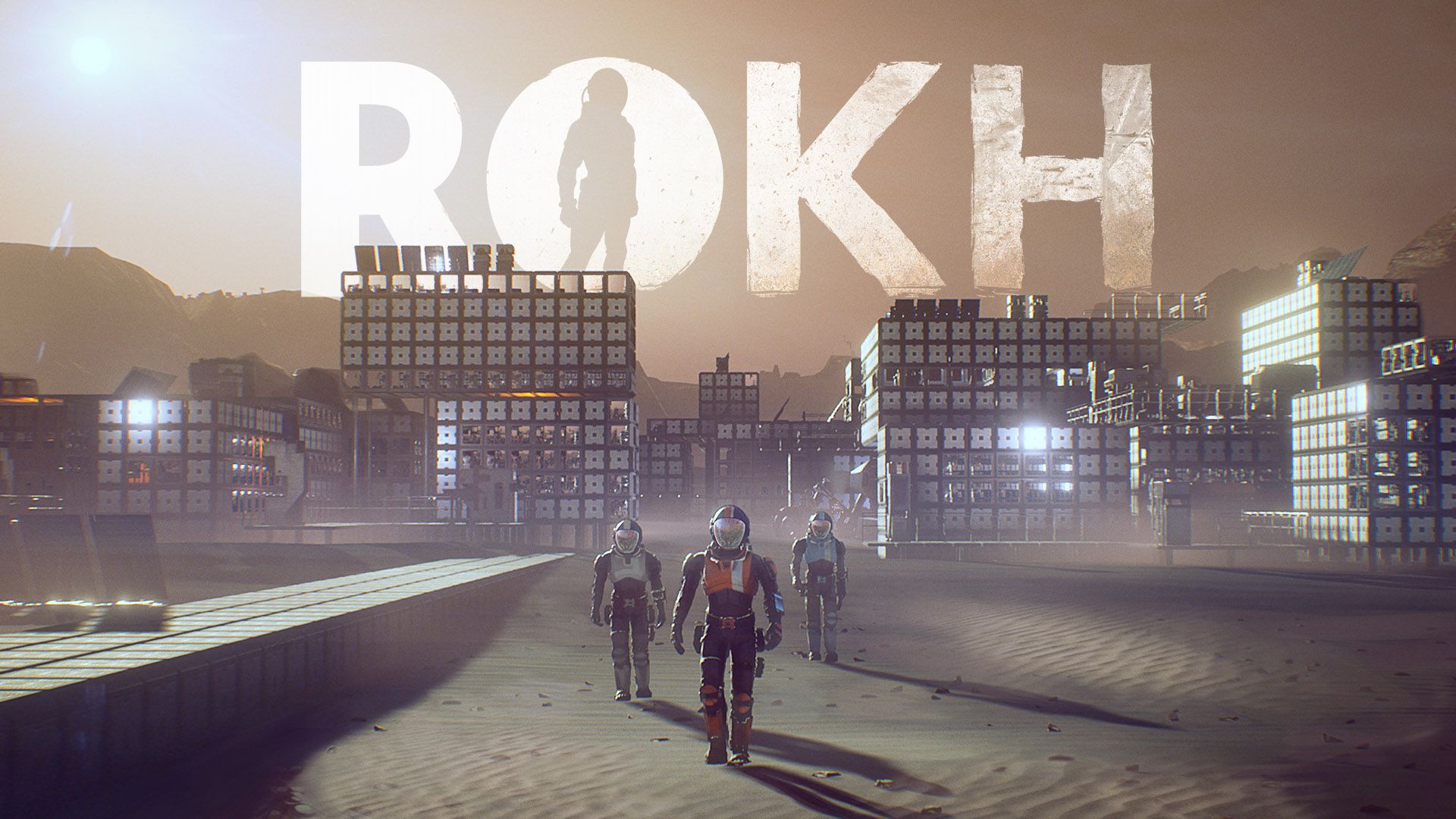 Developer: Nvizzio Creations , Darewise Entertainment
Publisher: Darewise Entertainment
Platform: Windows
Release Date: 16 May 207
Price: $24.99 USD – Available Here
ROKH is an open world survival game set on Mars. Players take on the role of an astronaut sent to the Red Planet after a series of nuclear blasts from the nuclear reactors destroy the planet’s settlements. With only the most basic supplies, players must scavenge and harvest resources from the planet to disable the out of control nuclear reactors and rebuild settlements for future colonization. The developers have built ROKH’s gameplay around the three pillars of crafting, survival, and exploration. The game is currently in alpha testing and is available through Steam Early Access.

In a market wildly oversaturated in survival games, it is hard to stand out. ROKH’s overarching story that ties the entire game together is likely one of the major features that will separate it from the rest of the pack. While the game is in alpha stages, players who explore the abandoned settlements will discover bits of writing left over by the now dead first wave settlers that tells tales from the last days before the nuclear blasts. I think it is a solid way to deliver a compelling story in an open world survival game. 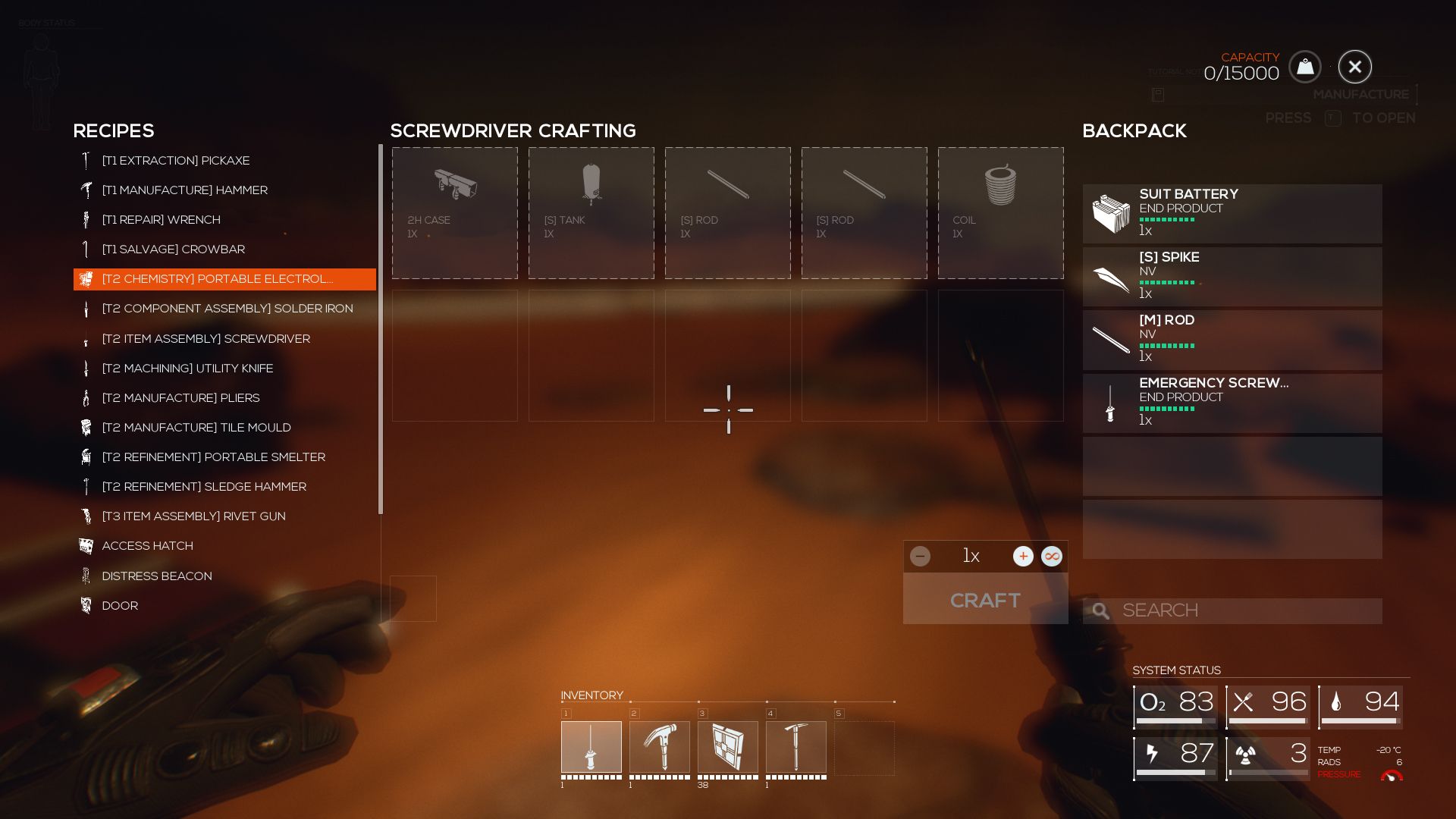 ROKH builds its gameplay on three pillars: survival, exploration, and crafting. To start a game players choose a server to create a character on and select a viable drop zone in the top left corner of the map. They are dropped near a power station and some emergency supplies. The players are only given a few basic tools and parts to construct their first mining pick. The rest will be up to the player to scavenge and collect. The early game puts a lot of focus on exploration, as it is the only source of food, water, and oxygen until players can craft the requisite machinery to create a steady supply on their own.

As ROKH is set on a near future Mars, players have a few more things to worry about than the average survival game. Not only do players need to manage their health, hunger, and thirst, the space suit needs to be powered and players must maintain a steady supply of oxygen while keeping their radiation levels low. The increased number of survival needs provides an extra layer of challenge when it comes to building settlements and exploring long distances.

ROKH has a pretty beefy tech tree that will keep players busy for some time. There are lots of tools, building blocks, and machines to available to craft. Creating a sealed space is one of the first tasks for the budding colonist. An enclosed space can protect players from radiation if crafted from dense enough materials and can be pressurized with oxygen, allowing for players to save their oxygen tanks for adventuring outside. From there, players will jump into a world of tools and machines used to improve living spaces, provide the resources needed for survival, and manufacture items in bulk. I really like that tools can be crafted with optional parts to give the tool extra modifiers like increased durability or higher damage once more advanced tools are available. 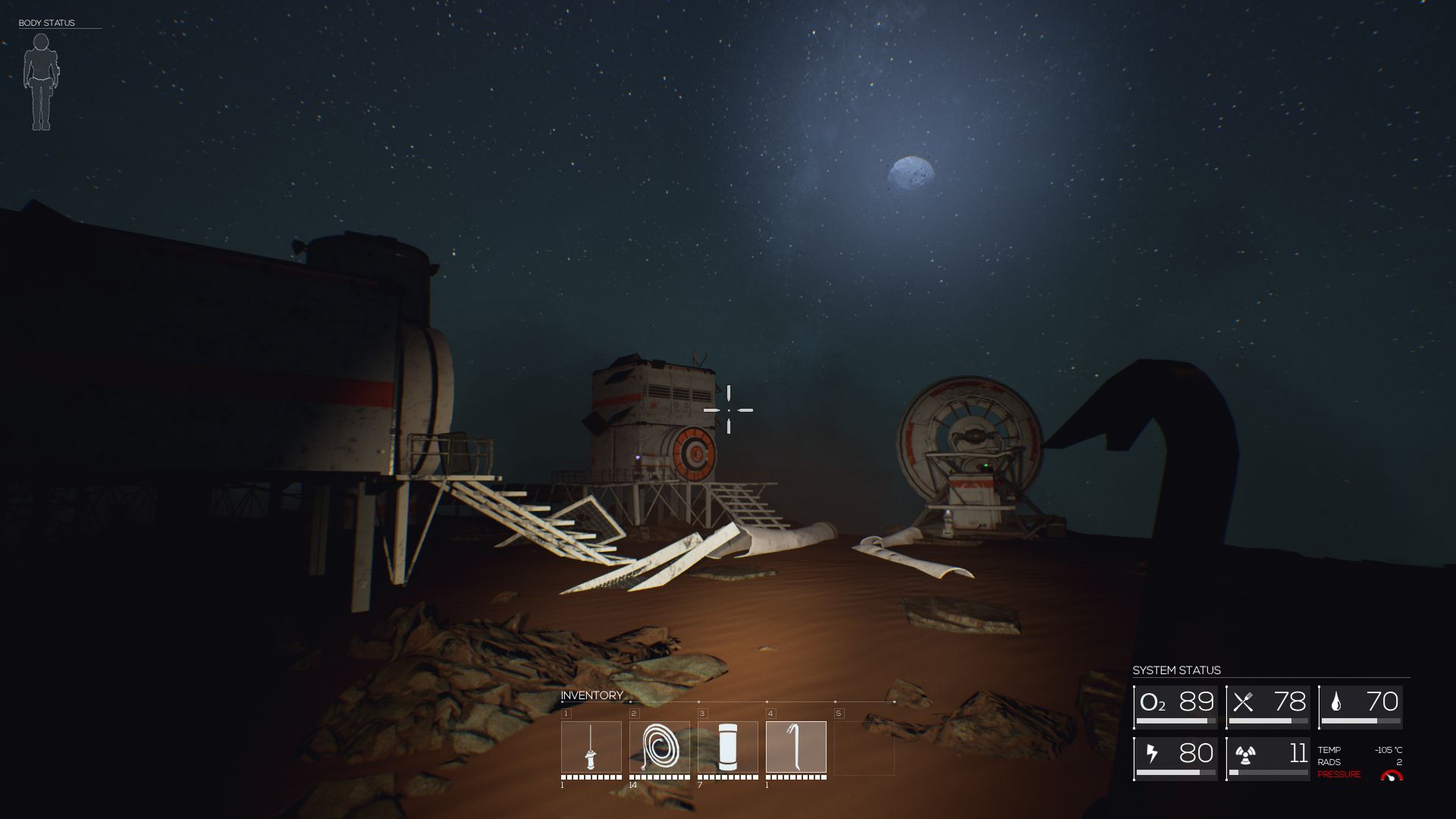 There are different raw materials to scavenge on Mars. There are only a handful of in-game textures for harvestable material right now, so tracking down specific things for harvest takes a bit of memory work at this point. I like that the crafting system is very flexible about what raw materials it will accept. As long as the material meets minimum stat requirements, it will craft. On the flip side, repairing items can be a bit of a hassle as each component of the item needs to be repaired with whatever material it was crafted with. Alternatively, players can simple salvage damaged parts from broken tools and reuse the part later. The reuse philosophy fits well for the Martian setting, but I would have liked to see the game separate damaged parts from fresh ones by default, instead of putting them all in one stack. That way, players could have better control on what parts they plan on using for a new tool.

ROKH’s crafting experience needs a lot of work still as it is incredibly clunky. The crafting menu is scattered between individual tools held in the toolbelt. To craft a single simple tool from a raw material mined from the surface, players will need to equip and use two separate tools, each with its own crafting menu. More complex machinery can require three to four different tools to arrive at an end product. Making the system even more frustrating is the limitation to just five available slots in the toolbelt, forcing players to shuffle around items constantly. A much better system would be a single, unified menu that provides options based on the tools currently equipped on the belt. Additionally, increasing the toolbelt capacity to eight or even ten slots would go a long way as a quality of life enhancement. 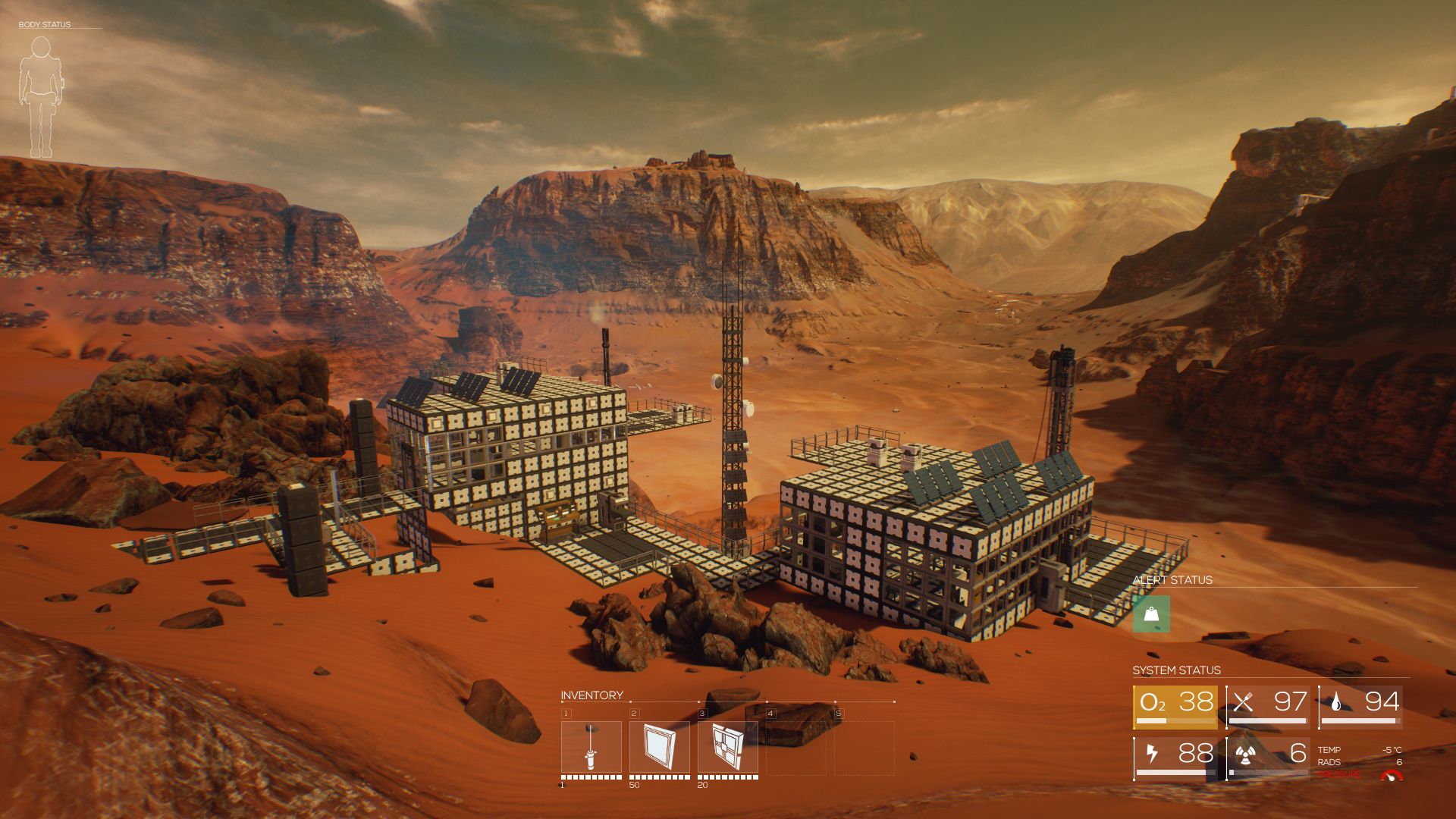 The menus are awkward at times. There is no indication on the server browser as to what servers the player has characters on. Tools like the crowbar and the wrench will hold items in its crafting slot when the crafting menu is closed, instead of automatically returning the item to the inventory. Crafting multiple items requires everything to be done in a specific order, otherwise the game will spit out an error. Inventory management is simple right now and desperately needs an organize bag button to help clean up messy inventories.

Construction is a much better experience. The base construction material are tiles, which as its name suggests are small flat objects that create walls, floors, ceilings, and any other surface the player may need to build. These can be made from nearly anything, though the denser materials provide better protection from radiation. Putting down the first floor as it can be a little tricky to find the exact ground height. But once the first floor tile is laid down, building with tiles is very easy as everything snaps into place.

The controls in ROKH very much reflects its alpha testing status. Options are at the spartan side currently. Key bindings can be tweaked, but there is no option to modify the mouse options. 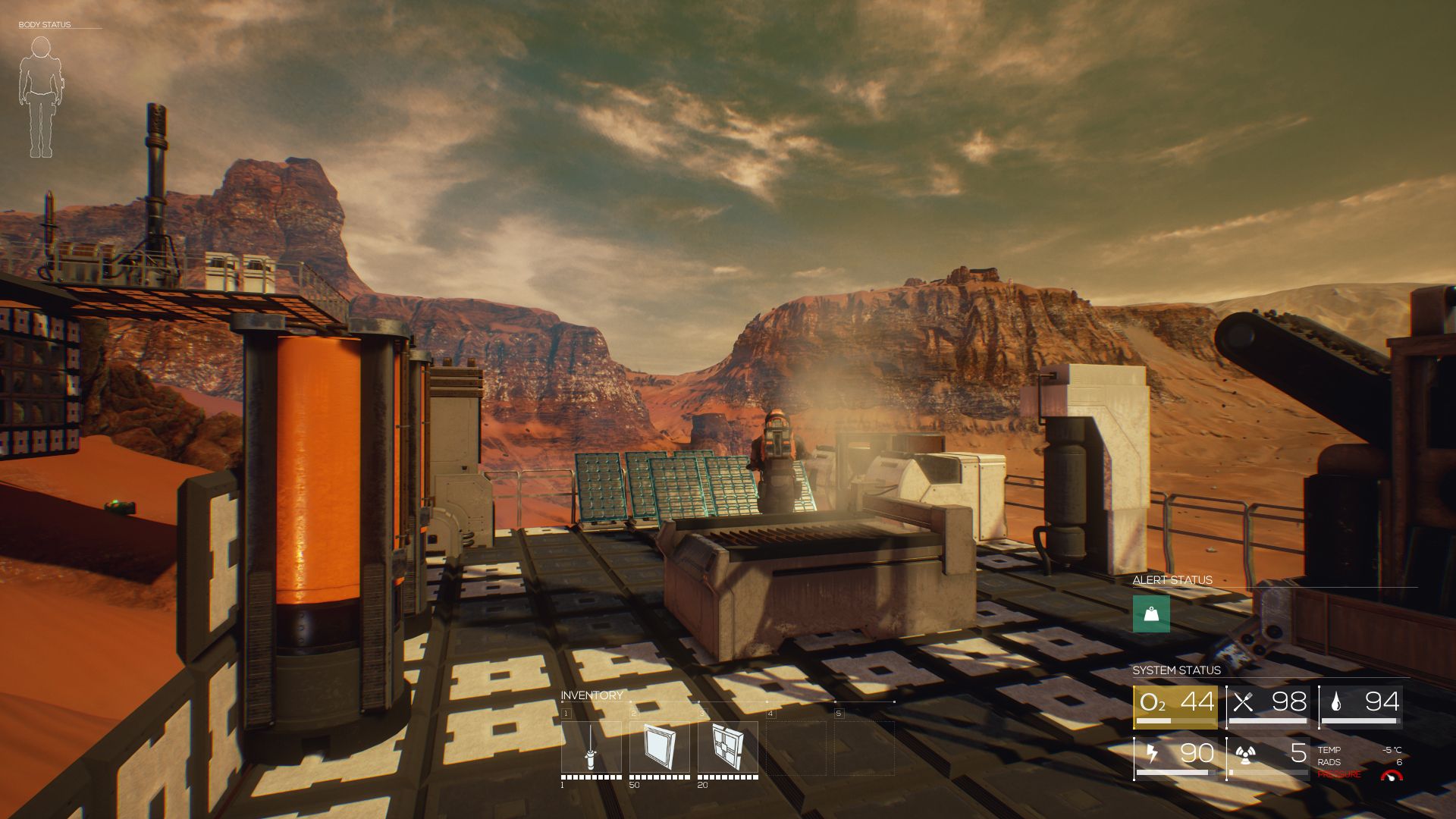 ROKH is clearly in its infancy and still has a long way to go before the game is ready for a full launch. The game’s emphasis on exploration with an overarching story to be discovered is an intriguing prospect. There are some good ideas floating around, but the user experience needs to be improved. Basic options for tweaking things like mouse sensitivity must be added soon. Menus need polishing to be more user friendly. The crafting system is in dire need of a rework due to its frustrating system of multiple tools and limited belt space. As with any early access title, the current state may not represent the end product when it is launched in twelve months time, but the current state of the game is not recommended for general play. 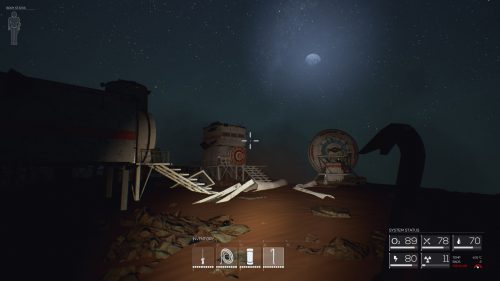 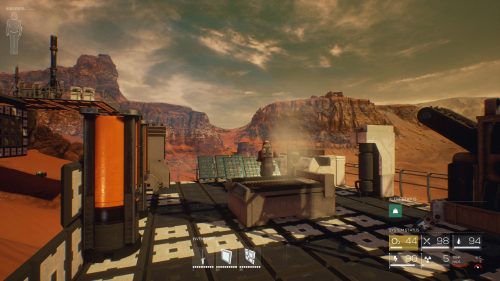