NIS America has announced that they are going to be releasing the second game in the Criminal Girls series under the name of Criminal Girls 2: Party Favors and plan on releasing it for the PS Vita in North America on September 20th and in Europe on September 23rd. Unfortunately similar to the first game, the company has announced that the release will be censored in the West through various modifications to the artwork, terminology, and removal of audio clips.

In order to get ahead of criticism, the company has provided a list of changes that can be found below:

Redrawn art
We had a bit more time to work on this title. We didn’t want to make any alterations to the game that would be jarring to the experience or feel “off,” so we worked with the original artist of the game who redrew the art for the Motivation scenes that might have caused issues due to their explicit nature. We didn’t want the game experience to change though, so we are also investing the extra effort into incorporating Criminal Girls 2: Party Favors’s unique Live 2D effect into the new art.

Terminology changes
As with the first in the series, Criminal Girls: Invite Only, “Punishment” will be framed as “Motivation,” and other terminology changes from the first game will also apply here. There may be a few other translation changes as well. This reduces the power distance between the player character and the girls in the Reformation Program and makes the activities of the game more consensual.

No native language dialogue
Like with Criminal Girls: Invite Only, we will not be dubbing the game in English. The game’s text will be in English, but the spoken dialogue will be the original Japanese voice track.

No Motivation scene dialogue
Some of this could cause an issue with power distance, or perceived consent of the activities of the game. This dialogue also represented a technical challenge to localization, because there are no subtitles. Thus, another reason this dialogue was removed was to avoid a situation of no text to accompany several lines of untranslated Japanese being spoken.

Criminal Girls 2: Party Favors tells the story of a brand new group of Delinquents that must be put through the “Reformation Program.” The twist this time is that one of the girls in the group isn’t exactly as she seems and as you journey through the game you will need to deal with the various seeds of mistrust these girls have in order to help them find redemption. 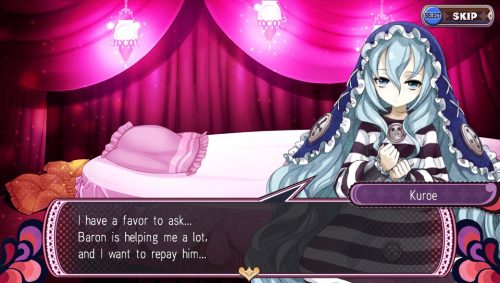