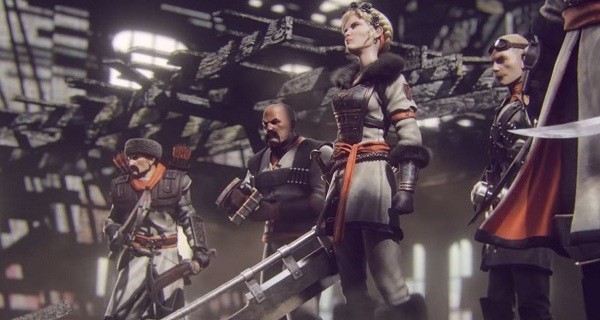 So among the din of E3 I found myself over at the Bethesda booth to see what I could about Battlecry studio’s Battlecry, which got a bit drowned out in the big announcements of Fallout 4 and Dishonoured 2. I was able to get some time with Lucas Davis, design director, to talk about the game in general and what players can expect from the game when the Beta finally launches here.

Can you tell us about what the concept behind Battlecry was?

So with Battlecry we wanted to go out and make a really fast, frenetic, accessible game that’s all about taking the brawler gameplay that maybe you’ve seen a little bit more in singleplayer games and bringing it into a multiplayer arena.

So we wanted 3rd-person action, highly animation-driven, really about jumping in and getting into battle. Really cool moves with melee, with a lot of really interesting weapons like transforming swords, and bows, and gadgets that a lot of games haven’t really presented before in an Industrial punk setting. It lets us bring out a lot of new technology onto the battlefield. So it’s a little-bit sci-fi with a bit of history to it as it’s got influence from the dawn of the twentieth century.

And finally, for us, we just wanted to make a game which brought all that together in a game. So you’d have these warzones where you could jump into, do these really cool over-the-top abilities with amazing animations and just really enjoy that kind of brawler combat across melee and range.

Cool, there’s definitely not enough steampunk games in my opinion. The game is slated to have three factions for players to choose from and you’ve showcased two factions at E3 so far; the Han Republic and the Imperial Marines. Can you tell us a bit about the third faction?

Of course! They’re the Cossack Empire and they’re strongly influenced by… well, the Cossack people and Eastern Europe. They’re an interesting mix of Russia and other countries and they have the absolute fearlessness and ferocity which those people have. They’ve got a long history of being mercenaries and fighting either with or against everyone across the European theatre. They bring an interesting mythology to the world and they’re still there being mercenaries, in the warzones and attacking with that utter ferocity… they’re always attacking. 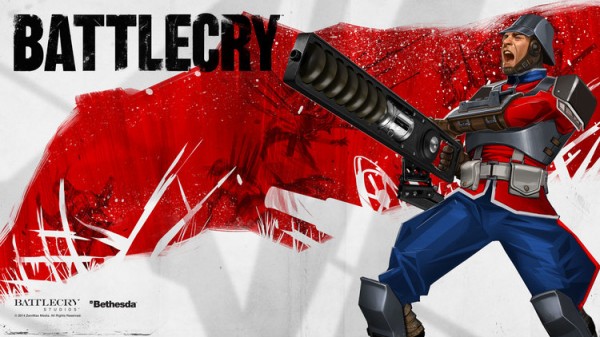 Horosho! So after playing the game a bit myself, the game appears to award victory to the team that works together the best. Have you put anything in place in the game to help facilitate player teamwork?

Well, alot of our classes really fit together very well in a team strategy. So the enforcer transforms into a shield and can actually block for their teammates. Rangers can get behind them and fire through their shield at enemies.

Rangers also have hunter vision which they can turn on and spot enemies through walls so they can be calling out where the enemy team is at and where they’re going.

The brawler has a flying punch and it really kinda lets them leap to single targets like that enemy ranger who’s harassing you in the distance and can then take them out. It’s a really good way to get around the map and close in on areas.

The infiltrator is all about getting behind enemy lines and attacking from behind so they’re really good at picking them off one-by-one or disrupting gadgeteers and rangers who stay back away from the main line. 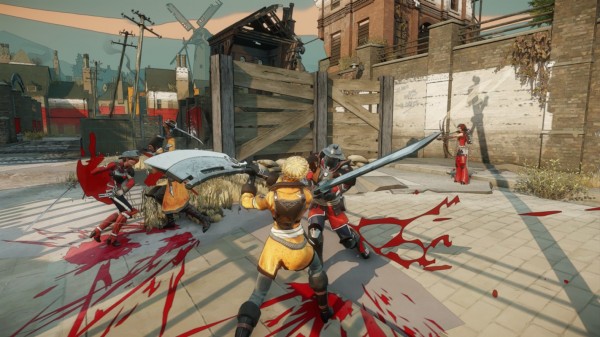 Awesome. In terms of player customization, what options are there for players in terms of both gameplay and cosmetic choices?

So we have a few different types of customization. We have our progression system which, as you’re playing the game and earning experience, you unlock ten ranks which are permanent career ranks that you own. As you upgrade, you’re going to get access to slots that you can slot in skills and completely change how your warrior fights.

These are parts of your loadout and you can have several different loadouts, so you can have an enforcer who’s really defensive or one who plays well on the offense… or an infiltrator who’s all about speed or one which is all about damage. It really changes up a lot of your abilities.

One example is that as a gadgeteer, I’ve got an ‘aeroscope’ that I can throw into the air and reveal the enemy locations. Through upgrading it with skills however, I can change it so instead of showing me the enemy, it instead feeds the enemy bad information and puts my dots on the enemy radar or completely confuse their ‘aeroscope’ that they have up in the air. So a lot of differences just there.

Another example with the gadgeteer is that they have a secret mine that they can throw which by default explodes but you can turn it into one that goes around as a roving turret that will actually zap and attack enemies. So it will really change up your abilities and how they play.

Additionally you’ll also have a lot of different skill options so an enforcer has a savage lunge that they can burst out and attack people with. One of the skills available is that if you actually land that attack, your next cooldown is greatly reduced but if you miss then you miss out on the bonus. So it’s with this that we encourage skill play that rewards you while still being balanced across the game.

Our matchmaking will match you with people of similar ranks but even as we playtest the game in the studio, we’ll have a rank 1 go against a rank 10 and yes a rank 10 does have a true advantage but skill is still enough to overcome that. 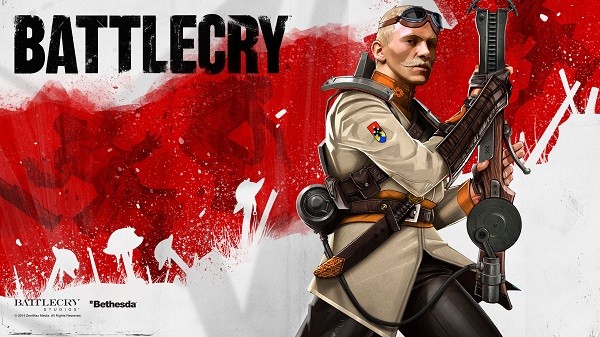 That sounds great. My question would then be about whether you have anything else in place to help keep the game balanced?

Absolutely! So we actually have an amazing business intelligence team that does a lot of telemetry for the game so we get tons of stats and tons of heat maps and we’ve got a whole portal we can go to as developers and see what abilities were used and where they were used, how much damage, which classes were dominating and where they were dominating. It really tells us a big story about how modes are performing and how the characters are performing and so every week we take that data and make small tweaks and changes to it.

It’s one of those things which is always a challenge as we’ve got players which have been playing the game for a year and a half or two years now, so we’ve got a lot of really skilled players coming in and we’ve got to balance that data with a playtest with all new players who just experiencing the game for the first time. Trying to make sure everyone feels balanced even as they’re learning the game. 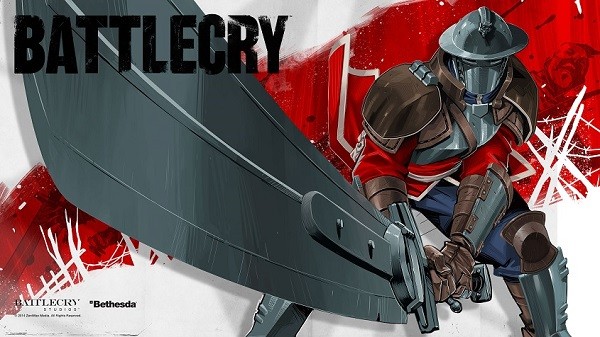 Coolio. Now a question about monetization; how is Battlecry going to be earning its crust?

So primarily we’ll be earning it through vanity. We have these really well designed characters with really interesting armour pieces with a lot of uniform changes that players can make alongside all new weapons, new animations, new transformations, taunts and kill cards. A lot of elements in the game which you can really make to look and belong to you.

For us, we’ve just put a lot of real effort into making them look awesome and animate great. They’re just exceptionally high quality so for players, we know they’re gonna see those and be like: “Yup, that’s how I want to look”. So for us, with the progression side it’s all something that you earn with xp so you can customise your character to play how you want to play but then you’re gonna want to make them look how you want them to look. That’s the dual combination that we’re going to be playing off of.

That sounds awesome! I look forward to playing more of your game when the beta comes down under. Thank you for your time. 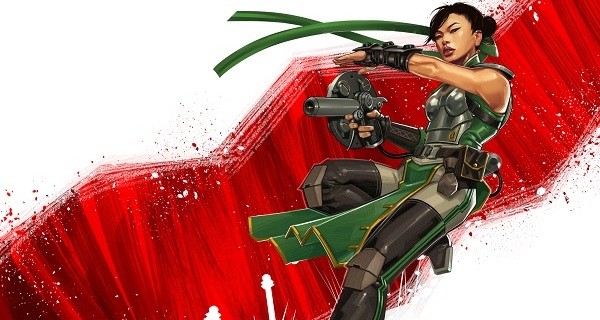 The Battlecry beta comes out in Australia and New Zealand on the 15th of August of this year. If you wish to sign up for it yourself, you can do so here. 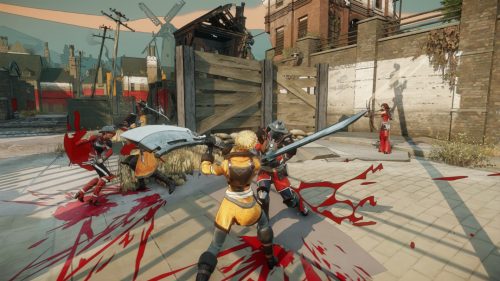