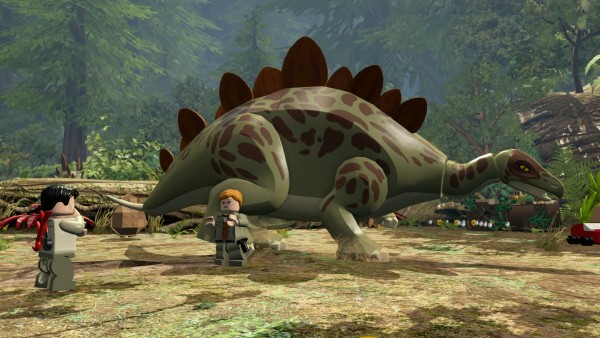 Can you hear the iconic Jurassic Park fanfare playing in your head, because if so you might…. wait, no? It’s only me? Well then… anyway! Whether you are obsessed with Triceratops or have nightmares about Velociraptors then you are in luck! Today’s the day, the Jeep has rolled up to the gates and the park is open, LEGO: Jurassic World is here.

Spanning the events of all four films, LEGO Jurassic World lets players relive some of the greatest moments in dinosaur history. Stick your hands into some Lego dino droppings as Dr. Sattler, chase down a T-Rex through the streets of San Diego as Ian Malcolm, traverse through Isla Sorna as Alan Grant while Raptors chase you down for their eggs or take on the role of Owen Grady as he REMOVED DUE TO SPOILERS.

As if taking on the events of the films wasn’t exciting enough, LEGO Jurassic World also lets you create your own plastic brick dinosaurs and set them leash on the islands of Isla Nubar and Isla Sorna. Not only that but the islands are completely open worlds for your to explore and of course since this is a Lego game, there are thousands of secrets and collectibles to find.

To mark the game’s release, Warner Bros. have put up not only a cool new launch trailer (which you can check out below), but also a couple new pics from the game. So check them all out and let us know in the comments below if you have already picked up the game, or if you are planning to over the next week, and as always make sure you stay tuned to Capsule Computers for all the awesome dinosaur news as it becomes available.