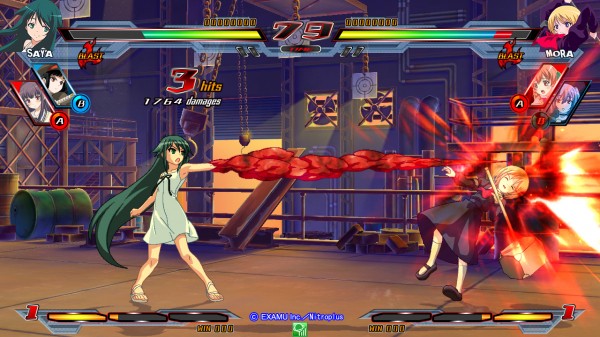 A large batch of artwork and screenshots for Nitroplus and Examu‘s upcoming arcade fighting game Nitroplus Blasters: Heroine Infinite Duel have been released and with these screenshots come a few new character reveals. While a large number of new partner characters have been revealed in these images, the only playable fighter to be revealed is Saya from Saya no Uta.

As far as partner characters are concerned, these screenshots reveal that Another Blood from Kishin Hishou Demonbane, Ishima Kaigen from Hanachirasu, Franco II Nero from Kikokugai – The Cyber Slayer – Outlaw Django, and Miykui Sone from Kimi to Kanojo to Kanojo no Koi have been added in as partner characters. For more details about past character additions as well as some early information about the game you can check out our earlier report here.