Habitat is a quirky physics based strategy game from 4gency and Versus Evil (The Banner Saga). The game is currently in Early Access alpha and was funded with the help of a Kickstarter campaign held earlier in the year. Players are given a randomly generated patch of space junk and some engineers to create a habitat that will help them survive.

After a quick tutorial, players are given an initial space station to serve at the core of their new space station. There are four main resources to manage: Omni for ammunition and purchases, electricity, fuel, and population for engineers. Some parts can be ordered for a small fee of Omni, but most of the building materials used in construction will be scavenged from the nearby junk field. Attached space junk will help generate resources over time. Some have special abilities that will interact with the world, such as weapons, rockets, and robot arms, at a cost of resources. 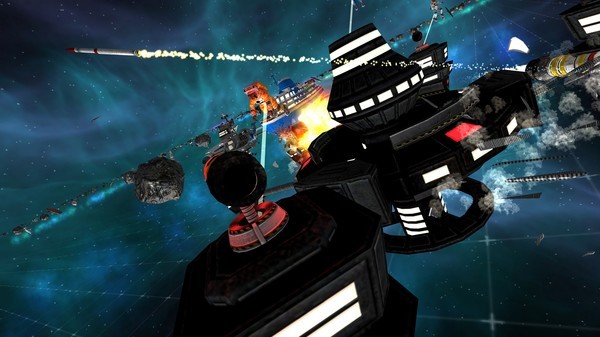 Players cobble together their space ships with the junk floating around in space by having their engineers weld in attachment points. Each piece of junk has a few pre-determined attachment points. Once an item has been selected and brought close enough to a valid attachment point, the game will automatically orient the object in the closest valid configuration. Further configuration can rotate the module in exactly the angle you desire. I did notice that it is not always clear why a module cannot be placed at a certain angle, especially when the model on the screen looks clear of any interference. A small error message in the chat box would be appreciated here. 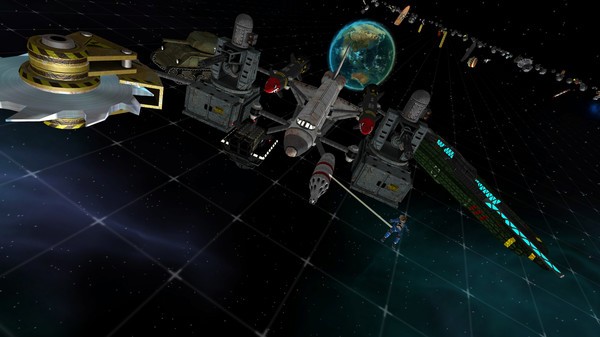 Once the first ship is configured to the player’s liking, a small number of simple quests can be started at the nearest space station. At this point in time, the quests do not provide much in story. Quests range from peaceful activities likes picking up and dropping off pieces of junk and clearing out enemies. Players can earn a small rewards for completing quests.

Habitat relies heavily on its physics engine. All of the junk seems to have its own mass that will affect how each space station handles. Stack too many pieces on one side of the station and it will need more thrusters attached to that side to move the station forward. Shoot an object with a missile and it will bounce away from the force of the explosion. Some of the hit boxes are a little off. A few seem to be smaller than the actual model itself. The physics engine is really what makes the gameplay shine. It is entertaining to just watch your insane creation interact with the world. 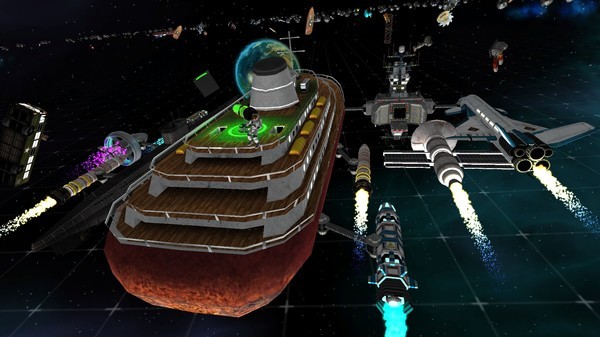 The premise of Habitat is an absolute riot. It sort of reminds me of the monstrous Lego creations I would make as a child, cobbling different sets of Lego together into a strange Star Wars/Indiana Jones hybrid. There is something hilarious about flying a space shuttle armed with a tank, a burger shack, and enough rockets to send it all to kingdom come if someone lit a match in the wrong place.

The controls are simple to learn. The camera is moved around using the WASD/mouse layout and several ability icons line the bottom left corner of the screen. For the most part, the game intelligently chooses idle engineers for the task. Once in a while, the player may opt to send a specific engineer to complete a task. Sending single ones is easy if zoomed in close enough; however, there is no way to assign groups of engineers to a single task, like disassembling an enemy ship. 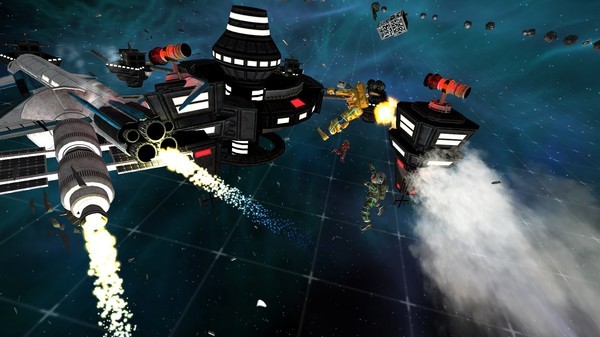 Steam Workshop has been integrated into Habitat. Currently, gamers can use the in game tool to import .fbx files from popular 3D modelling software like 3ds Max, Maya, and Blender and then skin them with .PNG files. Once the files are imported into the game, players just need to assign a health and mass value and are ready to go. The mod tools lets players share their creations with just a click of a button. The less creative among us can use Steam Workshop to download new junk to add to their world. Adding mods to my world was just as painless as creating the junk. I just needed to select which items I wanted to download through Steam Workshop, then go into the modded junk menu and tick off which ones I wanted to appear in my world. 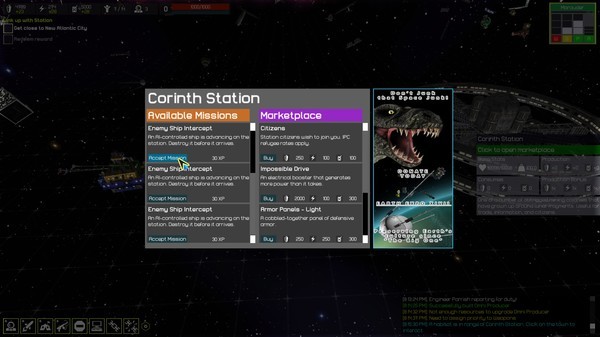 Habitat is looking pretty slick so far. It is not the most beautiful game of the year, but the sheer variety of junk available makes up for it. The UI is simple and works well. The music and sound effects are descent, though the real surprise is the high quality voice acting for the engineers. There are several sets of voices, which reinforces the individuality of each uniquely named engineer.

Habitat is a quirky sandbox game with a bright future. The quirky premise is great fun and will appeal to the kid in all of us. The simple to use mod tools is the icing on the cake. There are still some minor bugs and some hit box oddities that could be ironed out, but the game is surprisingly well polished, considering it only at v0.5 at the time of writing.

Dungeon of the Endless Preview