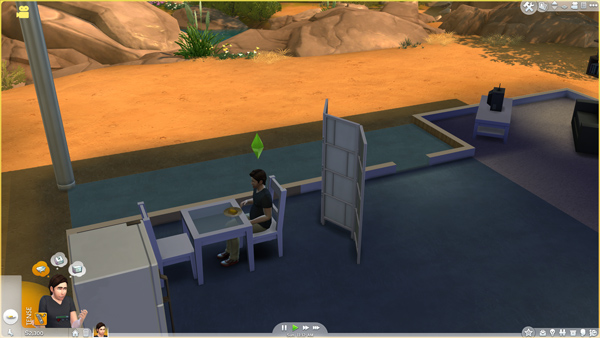 I personally have had a long and storied history with The Sims franchise that started with the original game. From the moment I played, I was hooked. The combination of playing god and building these incredible mansions was just downright fun. Then as a teen, I logged some serious hours in The Sims 2, building Resident Evil’s Spencer Mansion with almost 1:1 accuracy, among many other feats, only to have my entire game directory deleted by my girlfriend at the time after one of our disagreements.

That pretty much killed my desire to play The Sims anymore, and I only dabbled lightly in The Sims 3 when it launched before finally giving up. Then EA announced The Sims 4 and I was intrigued, I now had a better computer and no crazy girlfriend that would delete my save file, so I started paying attention and with more and more information that got released (like the new Create-A-Sim and the new way that Build Mode would work) I started to get really interested.

Now we are only a few days away from the release of The Sims 4, and I was lucky enough to go and get some serious hands-on time with the game courtesy of EA. I got to play the complete build that will be available this Thursday, and I got to be excited for a Sims game once again. So with that in mind, I thought I would share with you all what I learned, and what I thought about it all before the game’s release on September 4th. Enjoy!

Since many of you out there have no doubt been playing through the Create-A-Sim Demo, and because I have previously spoken at length about the new system, I wont delve too much into it. What I will say however is that if you felt the demo was lacking in style options, then your mind is about to be officially blown. I would hazard a guess and say that the demo only contains about 1/3 of the clothing options available at launch. With the new precision face and body sculpting combined with a plethora of wardrobe options, you should be able to make your Sims EXACTLY how you want them, down to the smallest detail. Not only that but if you are not great at creating Sims from scratch, then you can just open the gallery and download something that someone else has made. Want to put Captain America and Jessica Rabbit into your town? Now you can with just a few simple clicks! 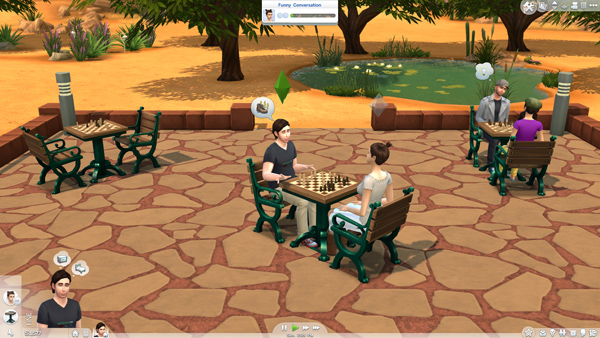 Some serious changes have happened with the build mode and I could go so far as to say that it might entirely change how people play. You still have access to all those fun tools, from before that allow you to create your dream house, or a single-bedroom style shack, but now you can do it quicker, easier and with much more precision.

The biggest addition is probably the fact that you can insert an entire room into your house. From the new “Styled Rooms” option you can place a completely furnished room right into the house in a matter of seconds. Each category of room (ie: study, lounge, bathroom, bedroom, kitchen, etc) has around about 7 different pre-built rooms, and each of these rooms has three different colour-coordinated themes. Not only that, but once you place a room you can drag, move and reshape the room as you see fit. This is a feature that EA have really drove home in their presentations about the game, and while it seems kind of trivial, once you actually use it you get to see how valuable a tool it really is. I imagine it is especially helpful for people who don’t want to worry about building houses, or those who just don’t know how to make a building that their Sims will love. 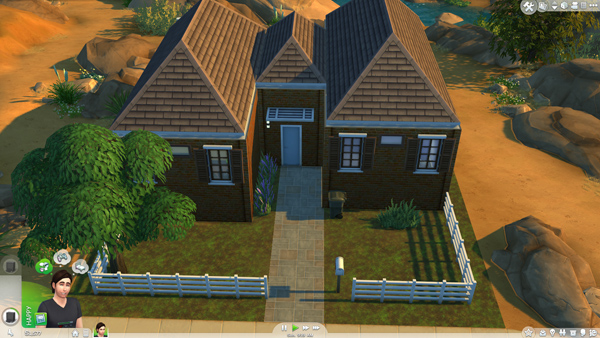 Once you have pieced together your house, it is all about the furnishings. The Sims 4 comes with just about every little piece of furniture that you might want to put into your house. Well, almost anything. I wanted to place a pool table for my Sim to relax with during his down time, but there was none to be found. No doubt this will be available in a later expansion pack, but a little disappointing that I couldn’t place one from the get-go.

One thing that always annoyed me as a player was the roofs. Making roofs that looked good was a laborious and almost impossible task, and eventually I would just give up and have this automatically created monstrosity sitting on top of my elegant resort-style manor, and it really was one of the game’s biggest faults. Now, the roof tools have changed, and you get complete control over the roofing. A new suite of tools means that the little angles on top of your house will now look excactly how you want them to. 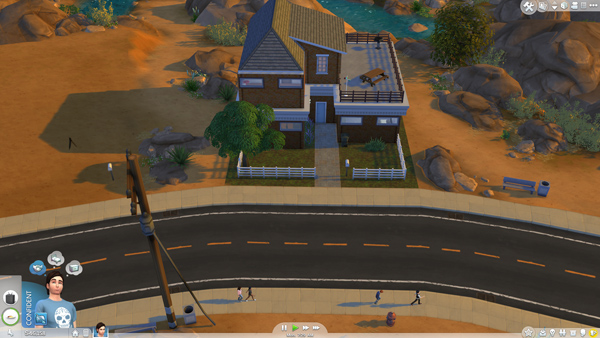 That roof was so simple to create, yet looks awesome! I never could have done that in The Sims 2 or 3

The Sims 4 plays a lot like previous Sims games; you move your Sim into a house, make them some friends, get them a job and basically control every aspect of their lives. Well now with the addition of emotions and whims, there is now more control and more depth to the game than ever before. All of these emotions and whims starts with the character traits that you select for your Sim. 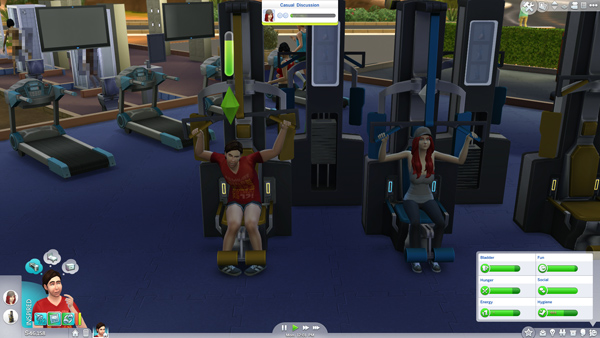 My Sim has apparently never used a weight machine before, unlike his new friend.

Those who are familiar with Sims 3 or with the Sims 4 Create-A-Sim Demo will know that you can select a number of ambitions and traits for your Sims when you first create them. These dictate the type of Sim you create. For example, the Sim that I used was Self-Assured, Childish and Lazy. From the moment he moved into his home, these traits shined through in his available dialogue and interaction options. For example, even though it was 8:00am in the morning, my Sim wanted to take a nap to fulfill his “Lazy” trait. Not only that, but the type of traits a Sim has can determine which of the game’s many emotions that they can feel at any given time.

My Sim was Self-Assured, so he was regularly feeling confident in himself and his abilities. In addition to being able to talk to just about anyone confidently, he also got special interaction options with furniture in his house. The most notable of this was to “Pee like a champion.” I didn’t notice anything particularly different with him peeing like a champion, but the fact that he could gave me a bit of a laugh. 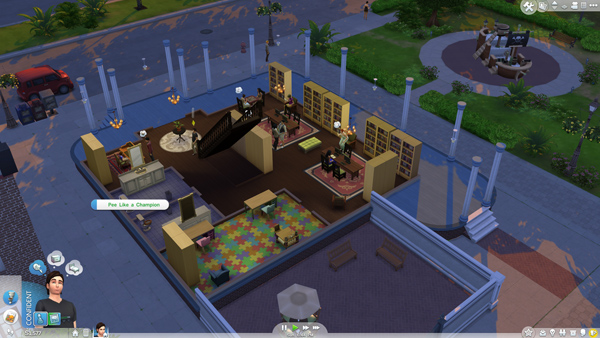 Traits aren’t the only way that Sim’s emotions can be affected however, as the way a Sim feels will change as they go through their daily life. My Sim was trying to flirt with someone that he met at the gym, only to fail spectacularly and become really embarassed and awakward. When he was like this, he was adamant about getting away from all people and locking himself away. These new emotions and the whims that they cause really create a sense of life and realism to the whole game.

Without a doubt the new feature that excited me the most was the fact that Sims can now multitask! This can be as simple as having a conversation between multiple NPC Sims, or even just to eat a grilled cheese sandwich on the couch while watching TV. Giving Sims the ability to multitask really makes the game feel more natural and lifelike, while also allows for unique interactions that simply were not possible in previous games. Sims can now spot each other at the gym, or can sling insults at someone who is trying to flirt. 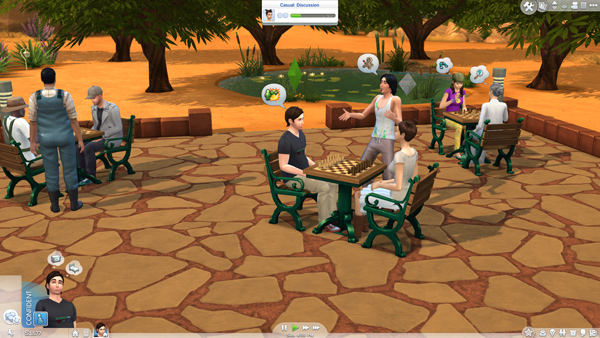 My Sim was just casually playing chess in the park, when this dirty man came up and just started talking smack…

I have spent a pretty reasonable amount of time checking out the forums and finding out what people have to say about the next iteration of EA’s person-sim, and a lot of people seem to be worried that too much content has been taken out. While it is understandable to be upset at the lack of pools in the base-game (a feature that has been present in the games since the original Sims), I think I understand why many of these changes have taken place and it is really a two-fold system. Firstly, the changes have resulted in a game that still retains the look and feel that Sims players have come to love, but at the same time has managed to cut down on processing power to ensure that it gets into the hands of as many people as possible.

Secondly, and probably most importantly; the people aspect of The Sims has been brought front and center. Emotions are a major part of the way The Sims 4 operates, and it dictates how characters will interact with one another and with objects and furniture in their own houses. While this is a little bit of a change from the past games, it will be interesting to see how this slight adjustment in direction changes the series. One thing’s for sure: we don’t have to wait too long until we are all able to grab The Sims 4 off of the shelves.

Take a Walk Through The Sims 3 Island Paradise

The Sims Make Their way to the 3DS….