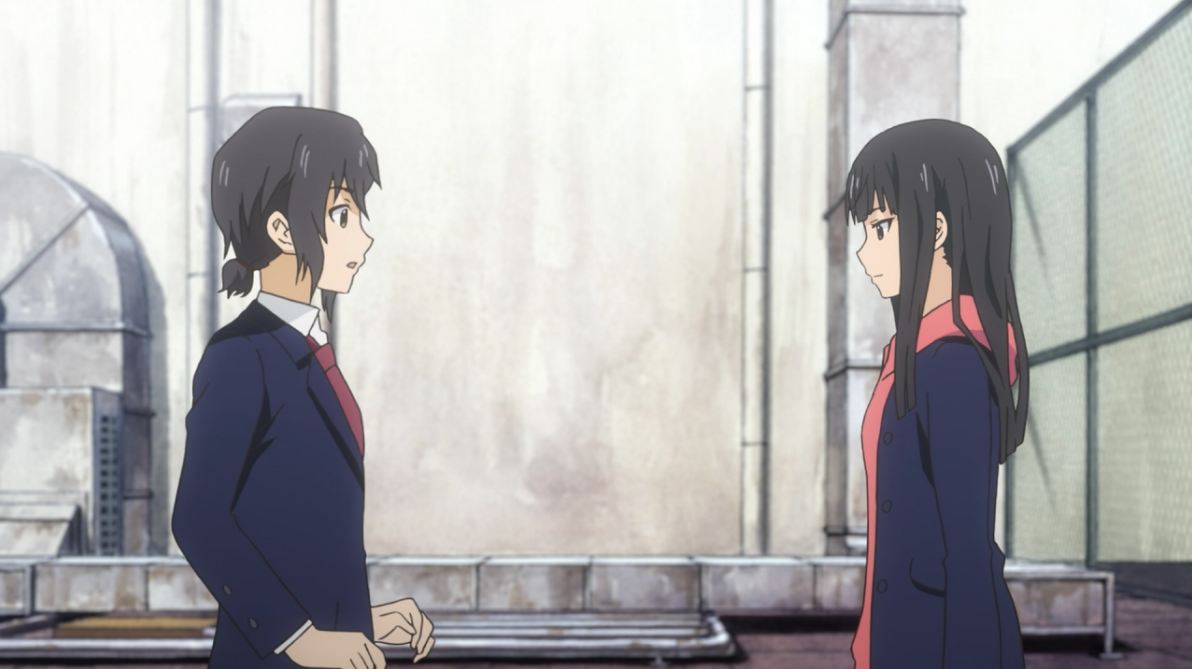 Well with last episode deciding to throw us a few curve balls regarding the truth of this twisted card game, we are finally given a few answers…not that they make the truth any less crazy. With both Yuzuki and Hitoe off in their own little worlds, Ruko must face the ever present fact that she is, once again, alone. Man, WIXOSS has done nothing for her… 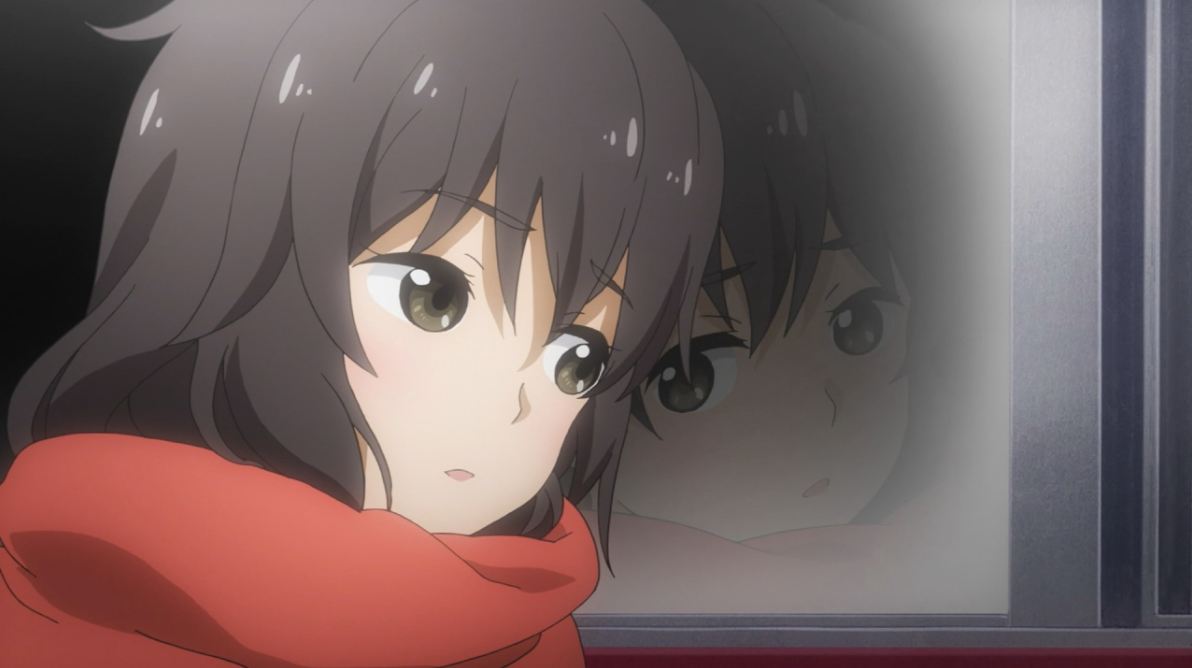 A moment of reflection

Alright here we go, elephant in the room, what is going on with Yuzuki? She won, congratulations, but her wish isn’t exactly panning out the way you’d think. At least not the way I thought it would’ve gone. So she confessed her feelings to Kazuki as per her desire, to which he reacted…less than joyously. Also throwing in their two cents, in a triumphant return to the spotlight, is every other student in the sibling’s school. This is where the show confuses me. The students aren’t wrong in their accusations, they’re not even wrong in their reaction to the information about Yuzuki and Kazuki, but the series still plays them off as the villains. Sure they’re annoying and should really stay out of other people’s lives, but they’re right. I honestly don’t know why the anime keeps playing off Yuzuki and Kazuki as two against the world. Does it honestly expect us to root for this relationship? It would have been so much more emotionally charged if Yuzuki had confessed her feeling and be turned down straight away. That way, like she has been in the series thus far, we could’ve seen a character who stands alone with a love that even they don’t want. We could’ve learned to like her, want to see her try to evolve her feelings past those of a repressed and tormented kindergartener. Instead we get Kazuki saying that he has felt the same way for his entire life. Is this supposed to be romantic? I understand that these characters aren’t ideal by any stretch of the imagination, but it’s kind of hard to support Yuzuki’s choice in wish. It’s not even like they led a particularly hard life and only had each other to rely on. There was no trauma, no blurring of familial lines to create her emotions. She just loves him. Never explaining why, just stating that she does. Though I guess this is the perfect example of emotions making no sense.

However, despite everything I just said, this incestuous relationship has one other rather crucial element: that’s not Yuzuki. The cruel truth to which the title hints at is a strange one. You see, when victorious in WIXOSS, a Selector’s wish does indeed come true…for the LRIG. Yep. All that work, all the battles, all the emotional torment…all for naught. It is also this truth that transformed Yuzuki into a LRIG, for now she must help a new Selector attain their wish, so that she may steal it. Thus the cycle continues ad infinitum. And what a terrible cycle it is. Honestly, there’s no point to it. All WIXOSS does is provide someone’s greatest desire to another person…and that’s the good outcome. So, at the moment, Kazuki is currently getting involved with the spirit of a girl essentially possessing the body of his sister who desires to be with him because of a wish that his actual sister made…so he’s basically committing incest with someone who isn’t actually his sister, but is using her body…what? As if this relationship wasn’t weird enough. 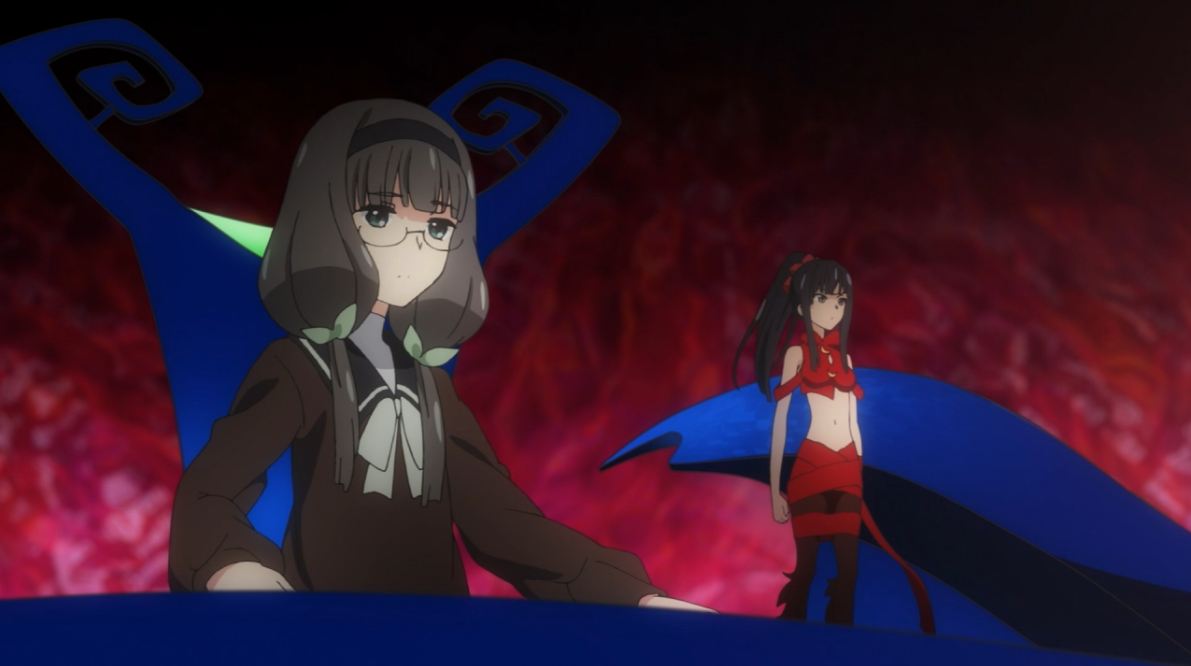 This truth also means that every LRIG we’ve see was once an average girl, now being forced to participate in battles for their own redemption, though at the cost of those they claim to fight for. Even Tama must’ve once fought and won, though her convenient amnesia excludes her from suspicion of malice. Unless she’s faking it. The revelation of this truth also means that, if it wasn’t sad enough, Hitoe’s loss killed someone: Midoriko. Also I guess Piriluk died…man this show is depressing.

If you thought that Yuzuki couldn’t permeate the series anymore than she already had, you thought wrong my friend. Not that she has become a  LRIG, everybody’s favourite emotionally confused schoolgirl now belongs to a familiar Selector: Hitoe. That’s right, hundreds of Selector’s in their city alone, these three girls just can’t stay away from each other. Coincidences aside, Hitoe has presumably adopted a new wish and decides to challenge Ruko to battle…because of reasons. Honestly, with her newly found understanding of the WIXOSS game, Yuzuki should’ve been smarter than to challenge Ruko. More than just the fact that Ruko is a prodigy at the game, why the hell would you battle your friend? Either way somebody is losing. I get that yuzuki probably wanted to say hello to her friend, but don’t fight her. I honestly don’t see why this battle is happening, other than for some kind of poetic “friend vs friend” emotional levity. These are th three girls that you’re actually supposed to like in this series, why make us choose which one we want to see happy? 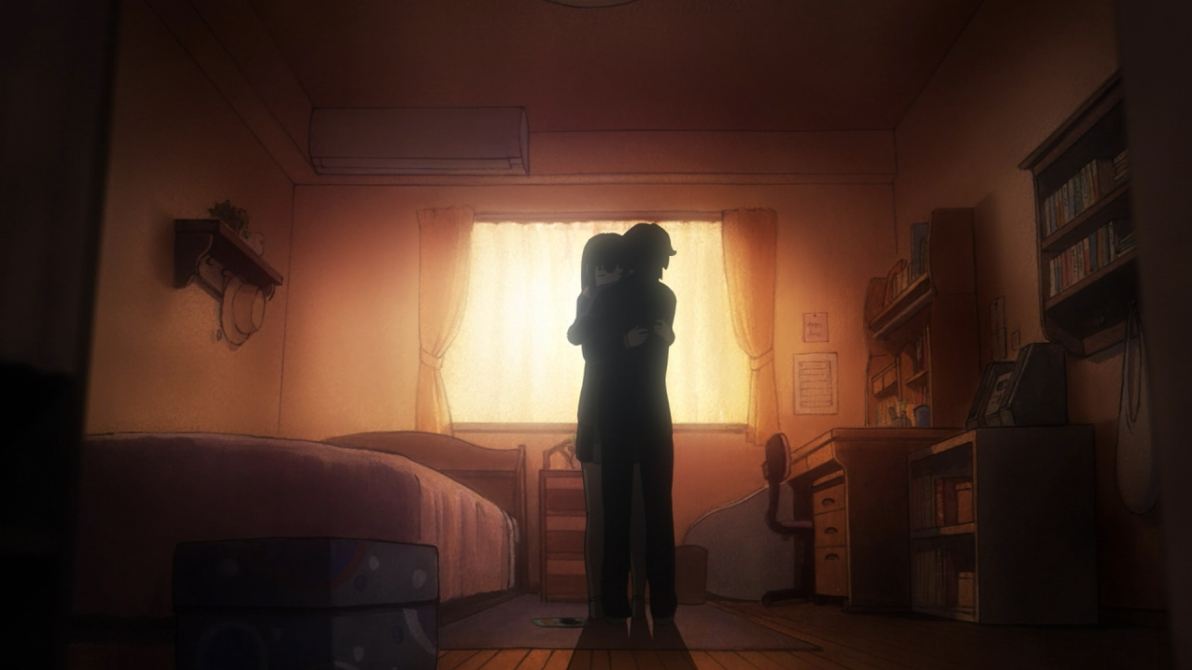 Blood is thicker than judgement

Well, this episode was…eye opening. I sound like a broken record, but WIXOSS is not a good game. Though I suppose the series could be trying to teach us a cruel lesson about the world. We’ve got friends losing lives, friends living other people’s dreams, friends turning against friends, enemies lying in wait, revelation, shock disbelief. You know, everything you’d expect from a card game. With Ruko and Hitoe now locked in battle, these highschool girls are being forced to understand a tragic truth that exists within life: Sometimes there are no winners, just people who lose less…