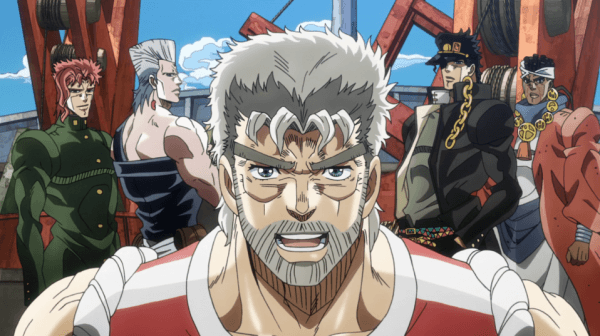 Here we are again, my friends! It’s episode seven of the “Stardust Crusaders” anime; an episode that continues us on our journey with the crew as they head into further into sea, boarding another boat, losing some more of their friends but gaining another quirky and ultimately nightmarish new enemy! It’s going to be a good week! If you missed out on the episode from last week, you can read about it by clicking here. Episode six had the team go up against a mighty, aquatic killer…and also a shark. Zing! I absolutely suggest you read my impressions for episode six before moving on, they’re both set out in the ocean and they’re both as silly as each other. Definitely something you don’t want to miss out on. Now onto episode seven; “Strength”. 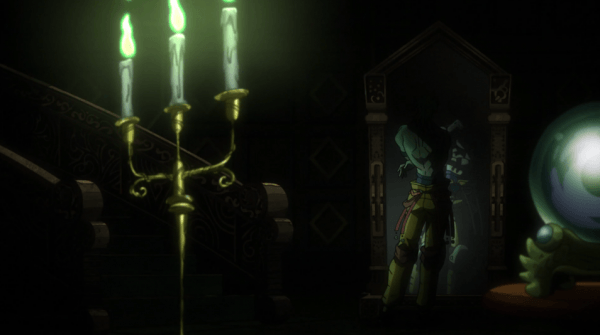 – Mirror Mirror On The Wall… –

Mirror Mirror On The Wall…

It’s been well over a hundred years since DIO killed Jonathan and took his body yet every single time he is shown, the lord of darkness is partially naked and admiring it. Is he THAT in love with himself? Wait, that’s Jonathan’s body…is he THAT in love with Jonathan’s “jacked” torso? The start of episode seven has DIO staring into a full-body mirror while talking to his creepy shaman friend who, might I add, has absolutely no problems with him perpetually being on his way to fully undressing. With no sign of any naked girls around (like last time), I believe DIO has just come out of a “me time” session and is ready to talk seriously with the withering husk of a woman he’s probably commanded to stay in the corner of his…pyramid?

I’m still not sure exactly where DIO is but I’m sure he’s living in something outlandish. The vampire king has begun to worry about the Joestar crew getting closer to him stating that he fears the fact that he cannot underestimate them. So, to be clear; he doesn’t fear them, he doesn’t fear their power, he’s not worries about them defeating him, he’s simply concerned that he is unable to underestimate them…take that any way you want because I’ve got nothing. I assume this portion of the episode was to showcase DIO’s “emotions” but I’m not really sure it did that well because he was still too egotistical to be real about how he felt WHICH, I suppose, is another thing the showrunners wanted to bring to the audience’s attention…next time maybe put a shirt on, DIO. Then we’ll listen to your feelings. 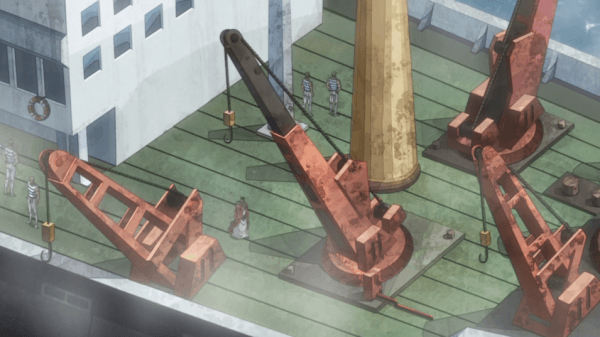 We now return to the Joestar crew as they come into contact with some sort of “Scooby Doo-esque” ghost ship that doesn’t seem to have a soul onboard yet continues to run just as perfect as any other fully manned ship. The crew from the last boat – who all survived the explosion of their original ship alongside the team – spread out across this new ship, each one of them doing their best to look tougher than the others. The Joestar crew, on the other hand, quickly jump to as many conclusions as possible, most of which end up being true. Just like every single other episode. No but in all seriousness; the reason I wanted to bring focus to this particular part of the episode is because it actually showed the main “Stardust Crusaders” characters to be more than just…well…assholes. At one point during this set of scenes, the young stowaway from the last episode (who has yet to be named but let’s call her “Pico” for now) begins to start worrying about her safety and contemplates who it is she should really be trusting.

As soon as Pico shows signs of doubt towards Jotaro and his crew, Joseph turns around and tenderly explains that they’re the good guys and she can always trust them. It was a little corny, I’ll admit that, but it was also incredibly sincere and really telling of just who these characters are. After all, they ARE going to save the world…I think…hopefully. In true “ghost ship” fashion, a member of the old crew is killed by a mysterious swinging crane hook that hadn’t been controlled or directed by anyone! The crew jump to action and exclaim that people need to be wary of the entire ship…there’s a good chance it might be a “Stand”! Unfortunately, even after seeing their comrade killed by seemingly nothing, the old crew don’t listen and go wandering off to do their own thing. Luckily their just canon fodder for the enemy to demolish so as to prove his/her ability level. Pico eventually wanders into what looks to be an empty room but that’s not what it is! It’s the opposite of empty; there’s someone or someTHING in there! What could it be? 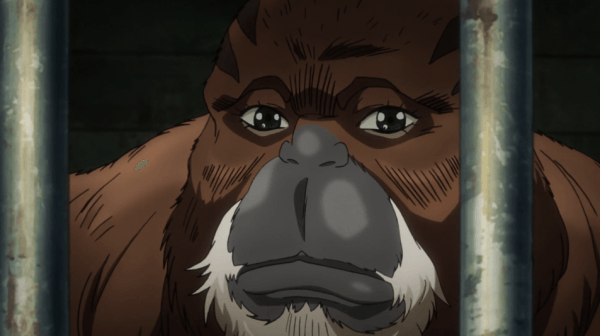 Turns out it’s a monkey. Sorry for the unnecessary hype, I just thought the reveal needed more “pizazz”. The beautiful mug you see above this paragraph is the orangutan that Pico discovers while searching through the ship, isn’t it unimaginably horrific? I’d be lying if I was to say this damn dirty ape didn’t scare the living shit out of me when it first appeared on screen so I’m just not going to say anymore about it. It is revealed that the only living inhabitant of this ship is a single orangutan but it quickly proves itself to be little more than just your standard ship monkey. After staring deep into Pico’s eyes while pointing towards the lock on it’s cage, the orangutan decides that it is time for a smoke and a bit of a perv. Not that he wasn’t already giving the young woman a bit of the lustful gaze. Reaching under what looks to be a pile of unidentified clothing, the orangutan reveals a porno mag and a pack of cigarettes, both of which he puts to good use to make himself seem real cool in front of the girl. That’s what women like in a man right? It’s how I try to “pick up”. Pico’s interaction with the ape left her feeling…dirty so she continued her tour of the ship hoping she’d soon find a shower to wash off all the monkey sex vibes.

She eventually finds a place to “freshen up” and then proceeds to age about five or six years in the time it took her to get completely naked so as to not have viewers inadvertently staring at a young, naked girl. Unfortunately Pico doesn’t exactly get a chance to enjoy her shower because it is quickly interrupted by…well, you know who. Mr. Orangutan forces himself onto Pico but luckily Jotaro is always just around the corner and he comes to save the day alongside his best friend “Star Platinum”. The ape has a bit of a freak out and fights back, revealing that HE is a “Stand” user.

Who would have though? Me. I thought it. It was kind of obvious. After a bit of a scuffle wherein which Jotaro gets shoulder stabbed with a sealing fan, he comes to the conclusion that it is the ship that is the ape’s “Stand”. Oh, also the rest of the crew are still on the main deck though they’re in a bit of trouble themselves but…do we really care about them? No. They’re fine. One thing I’ve come to understand about this series is that no one apart from who’s currently in a fight is in any trouble at all. Jotaro and the orangutan continue to “thrown down”, this takes up a bulk of the episode but, once again, there’s a lot of “talking” and only a small portion of fighting which is really the norm for series’ of this kind. Now that the monkey is defeated, what will happen to the boat? It will implode you say? Well then…EVERYBODY BACK INTO THE LIFE RAFTS! 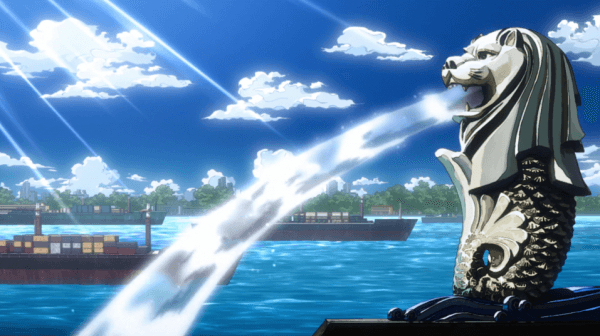 Just before the end of the episode we’re, once again, met with DIO and his elderly lady friends still discussing what exactly is going to happen next. DIO is starting to get a little nervous; they survived two “Stand” users even while the odds were against them, they’re slowly getting closer to figuring out where he is and it seems as though Jotaro just continues to get stronger and stronger…DIO my friend, you’re dead. The shaman reveals that her son has already been dispatched to fight the crew, the man with two right hands…but for now the crew is safe once again!

Though I use the word “safe” lightly. The great thing about the ship imploding and the team’s fates being left up to the sea is that they still, despite all odds, made it to Singapore which is exactly where they wanted to go…they just had to destroy two ships to get there. The Griswolds have nothing on this oddball family, at this rate it’s hard to believe they will ever make it to Egypt. Right now, none of that other stuff matters at all because they’re on dry land, they’re in a beautiful country and they’ve already booked themselves a couple of hotel rooms but…who’s bunking with who? Also…what’s the creepy doll doing on the bedside table?