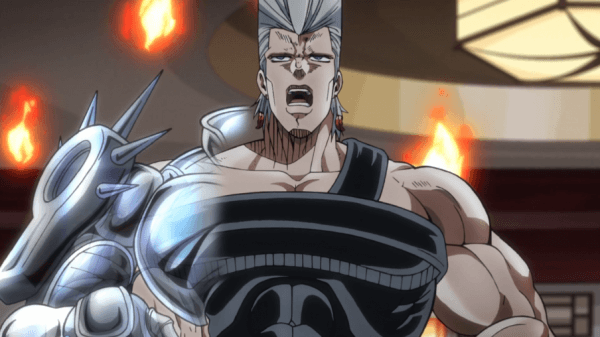 Boom! Episode five already! It’s been just over a month since the start of “Stardust Crusaders” and I feel, at this point in time, we’ve pretty much begun to fully understand just what this show is about BUT, knowing it IS “JJBA”, there could be something in the near future that will throw us off. Last episode we were introduced to the newest “frenemy”, a man named Jean-Pierre Polnareff (Jean-Pierre Eiffel for all you “All-Star Battle” players). Within five short minutes this man had already angered the “CREWsaders” – which, let’s be honest here, really doesn’t take a lot – and issued a challenge to the group’s mystic; Paula Abdul…I mean; Muhammad Avdul…excuse me. Just a little slip of the fingers. Episode 5 “Silver Chariot” revolves mostly around the fight between Polnareff and Avdul but if you’ve yet to read the impressions on episode 4 than I suggest you head here and take a read before moving onto episode 5. 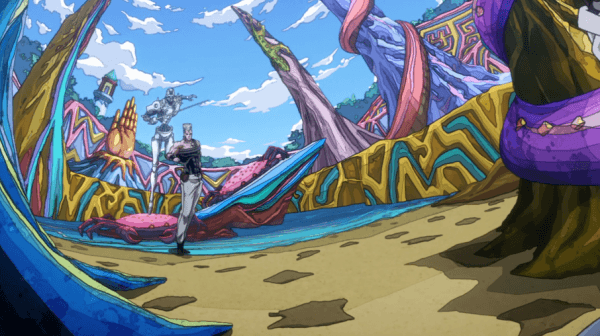 Check Out My Shiny New Body!

Before any fight in the “JJBA series, as per usual, combatants must first flaunt all their attributes; detailing each and every little thing they could possibly do to the other fighter. This gives the combatants the chance to annoy the living hell out of audience members but remember; we are stupid and need everything explain to us. We first saw this back in the days of “Phantom Blood”, a time when an old friend of all “JJBA” fans (Robert Edward O. Speedwagon) would commentate on literally every single thing that was happening in the scene. R. E. O. Speedwagon isn’t around anymore, God rest his soul, but there IS someone who has taken his place as “annoying guy yelling about everything” and that’s old man Joseph.

Thank God! To think; watching an episode of “JoJo’s Bizarre Adventure” and NOT being bombarded with obvious information…that’s a world I don’t want to live in. The two men begin explaining what their “Stands” can do. Avdul’s “Magician Red” is one we’re already aware of so most of the spotlight goes to Polnareff who explains that his “Stand” is quick, strong and precise which is entirely unique and, according to him, near unbeatable *cough* “Star Platinum” *cough*. After “fronting” on each other for a fair amount of time, Polnareff decides to take the fight outside to a place where he believes Avdul can truly unleash the power of his “Stand”. What a gentleman! 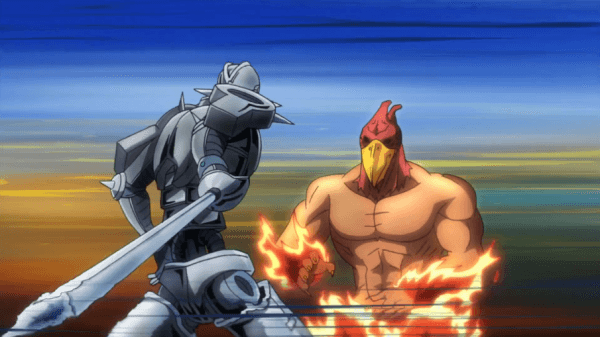 Heading out to the “Tiger Balm Gardens”, which I’m told is an actual place, the two begin their fight. A quick Google search for “Tiger Balm Gardens” will show you that the eccentricity of the environment to which the battle took place in wasn’t that over-exaggerated bar the overly vibrant colouring system. “Tiger Balm Gardens” does indeed look as whacky and wonderful as it was portrayed in the episode. The fight between the two “Stands” definitely was the highlight of the episode for me, not only because it was the bulk but because it sported some incredibly beautiful pieces of animation.

The burning fires of “Magician Red” going up against the glistening armour of “Silver Chariot” on a back drop like the “Tiger Balm Gardens” made for an incredibly exhilarating set of scenes. As much as I make fun of “Stardust Crusaders”, there’s no real doubt in my mind that it actually is an incredible series…it just so happens to be one with many dialogue and story flaws…if that makes sense. The two continue to duke it out but it looks as though “Silver Chariot” has begun to take the lead, dealing out some powerful blows while all the while toying with Avdul and “Magician Red”…a mistake he’ll eventually come to regret. Avdul decides to stop mucking around and dishes out when hell of a finishing move which knocks Polnareff back, sends “Silver Chariot” back to wherever “Stands” go when they’re not visible and “wins” the battle…or so he seems. 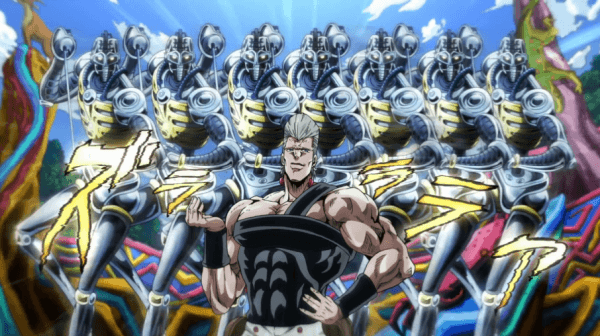 – Allow Me To Slip Into Something More Comfortable. –

Allow Me To Slip Into Something More Comfortable.

As Polnareff lies there burning, the group decide to head off, each with their own assumptions about Polnareff’s condition. Jotaro being Jotaro, he says something along the lines of “He’ll probably die. Best case scenario; he’ll just be burned really bad for the rest of his life”. Kakyoin being Kakyoin, he says something along the lines of “clearly he wont be able to walk for at least three months”. Avid watchers of “Stardust Crusaders” will know that it seems, no matter what these people say, they’re always right…well, guess what? They’re wrong and I think it’s about time they all shut the hell up with the assumptions! Poof! Polnareff shoots up into the air but, oddly enough, he’s still lying on his back.

“What!?” they all exclaim. It seems like the “CREWsaders” were all wrong, how could this be? We’re met with “Silver Chariot” ejecting his armour off of its body revealing a slender, streamlined version of itself. Polneraff, obviously NOT deceased, explain that his “Stand” has an ability that makes it a great deal faster and all he has to do is get rid of the armour around it. Good thing he goes into great detail, it wasn’t at all obvious. Polnareff begins his counter attack by creating “Shadow Clones” using the speed of his “Stand” in an illusionary way. “There’s six! No! SEVEN of them now!” old man Joseph explains. “Silver Chariot” has become so much faster than he was before, too bad Muhammad “Paula” Avdul, it looks like this is the end for you. 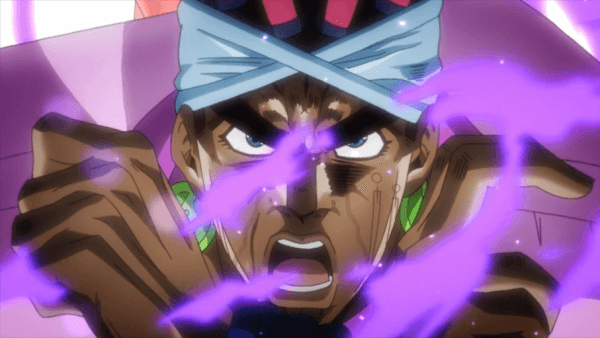 Forgetting that Mr. Avdul has some of the longest sleeves (in which tricks can be placed), Polnareff goes all out with a flurry of stabs, slices and cuts, thinking he’s truly got Avdul in a corner. For the most part it really does look like the mystic is stuck between a rock and a silver robot man…LOOKS like! Avdul, for the second time in the episode, decides; “enough is enough!” and begins HIS counter attack! Counter, counter attack. You get what I mean. Repeating what he said earlier he explains that he can control flames, bending and shaping them to his very will. To Polnareff’s surprise it seems as though the sneaky man dug what looks to be some sort of “fire hole” with one of his earlier attacks, too bad that it’s too late, huh Polnareff? BOOM! The Frenchman gets hit with a devastating flame attack and goes down like a sack of “foie gras”!

“You’re ten years too early to be able to beat me” Avdul says with a smirk as he throws a sharp dagger to the man now on fire. “Kill yourself with this dagger, it’ll be a lot less painful than burning to death”, what a considerate man he is! Such a gentleman, Jonathan would be so proud! Despite having his back turned, Polnareff does not use the dagger to strike at Avdul nor does he use the dagger to end his own life. He believes that to die by Avdul’s flames would be the proper way for him to go, that’s when the flames go out…Avdul is moved by Polnareff’s actions and decides to leave him be but not before calling on doctor Jotaro to get rid of his “flesh bud”. Leaving the man to think about just what he’d done, the team head for the docks where they’ll jump on a boat and begin sailing to Egypt. It’s been a long day, especially for the smouldering Frenchman. That’s NOT a euphemism. 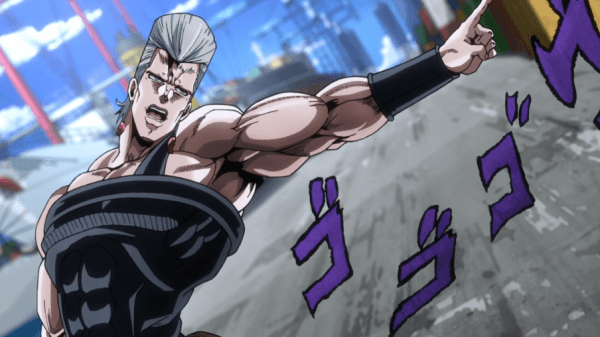 – Polnareff: A Life In Retrospect. –

Polnareff: A Life In Retrospect.

Polnareff actually seems like a nice guy and he’s not the type to let the team head off on their adventure before giving them one of his most heartfelt apologies, unfortunately Avdul wont accept it because he believes Jotaro truly saved him from DIO’s “flesh bud” and Jotaro wont accept it because well…he’s a royal dick, excuse my language. Avdul asks that Polnareff tell the group his story and, taking exactly three steps away from them simply to gaze upon the sea, he lets loose the story of Jean-Pierre Eiffel, I mean…Polnareff. Many years ago his sister and her school friend were confronted by a man like no other. It was a rainy afternoon but no droplet seemed to actually make contact with this trench coat-clad individual, clearly he was a man in possession of a “Stand”. The friend of the sister was clearly the lucky one only being dealt a shocking slice to her chest that nearly killed her, Polnareff’s sister…rest in peace. The friend made it out and immediately alerted Polnareff, I would have gone to the police but an older brother is pretty much the same.

She described the man as having two right hands and, ever since that day, he’s been searching for the killer of his beloved sister which led him to come under the spell of DIO with the dark lord promising him revenge. Making his story known to the group, Polnareff asks one of the stupidest questions of heard in recent times; he questions Joseph Joestar noting that he never once took off his gloves. Polnareff seems to assume that, under the old man’s gloves, are two right hands despite the fact that simple gloves would not mask such a mistake in human creation…but no-one calls him out on it…why? The group gets interrupted by two young ladies who’ve become entranced by Jotaro’s good looks, they ask for him to take their picture and he tells them to “get lost”. Classic Jotaro. Polnareff, though, is more than happy to snap a couple pictures, this particular scene shows his more playful side. Clearly this new addition to the group is going to be the laugh-bringer for the rest of the series. Oh! I didn’t tell you? Yeah, he decided to join the “CREWsaders”, that may have taken you by surprise…if you’re the types of anime watchers that skip the opening sequence. Another addition to the team and the start of another leg of the adventure! Hazzah!

Hyperdimension Neptunia anime to be released on home video 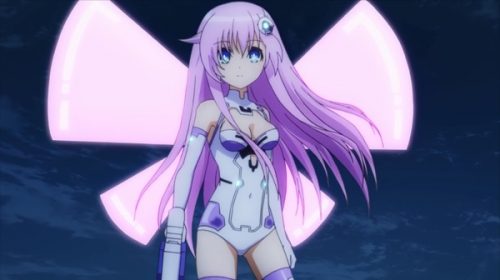