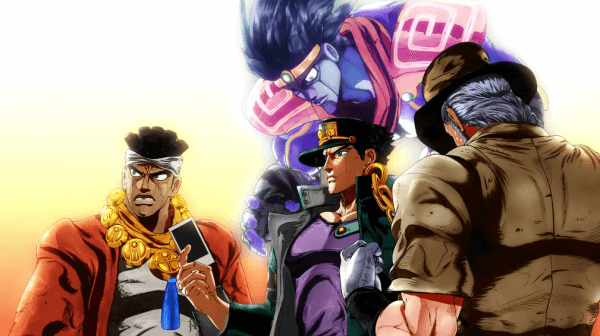 JoJo’s Bizarre Adventure: Stardust Crusaders
Episode 2 – Who Will Be The Judge?!

“Who Will Be The Judge?!” made up for what last weeks episode lacked; a theme song. Now that we’ve been gifted the auditoral excellence that is “Stand Proud” by Jin Hashimoto, talks of how good the “Stardust Crusaders” theme song better be can be put safely down to rest. While not as good as the first two theme songs for the series, “Stand Proud” does have a nice feel that I believe properly represents the series; it’s not as bubbly and hard-hitting as the first two opening tracks but it’s here to stay so start getting used to it. Episode 2 introduces us to another character for the series, one that was shown to be somewhat of a friend to the crew in the opening which somewhat ruined the surprise but the series has been around for so long I’m sure audiences have done their fair share of research. 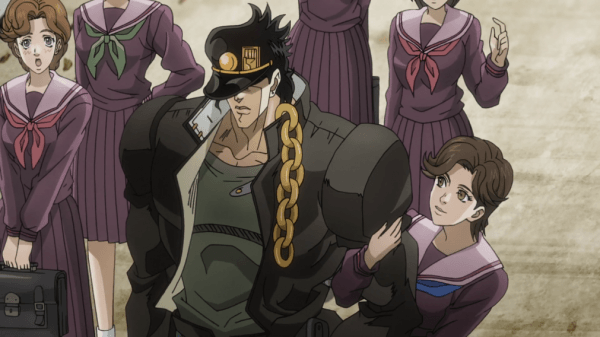 Apparently the broody and angst-filled Jotaro is quite the catch. Ladies seem to love him but for some reason he doesn’t seem to love the ladies…I guess he’s too busy concentrating on holding up his own hulking mass of a torso to take any notice of the beautiful, swooning girls around him. Sweet, innocent, naive Jotaro. You’re too precious for this world. While walking to school, Jotaro – followed by a mob of cute schoolgirls – has a bit of an accident which involves his leg being mysteriously slashed and him falling down a flight of stairs which looks as though stretches to infinity. Lucky he has a wingman like “Star Platinum” who quickly grabs a tree branch and swings him to safety.

This scene escalated so very quickly, the intensity in the animation was incomparable and he was simply falling down a few steps. The good and occasionally bad thing about “JoJo’s Bizarre Adventure” is that it is extremely exaggerated, to the point where it almost becomes a comedy series rather than an action/adventure, “shonen” romp. Deffinitely go into “JJBA” with a good sense of humour because some scenes will make you laugh for reasons you would have never pondered before. The girls walking behind him quickly rushed to his safety, all the while flirting. Time and place, ladies. Within the group of girls though is a mysterious, young man with a green uniform and odd hair…a young man we saw painting Jotaro as he walked to school. Interesting. 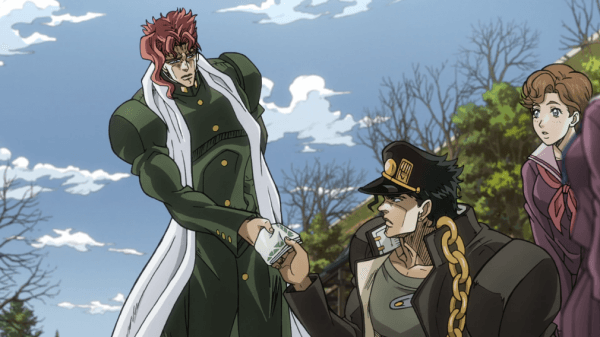 “I’m Noriaki Kakyoin. I just transferred here yesterday.” Yeah, likely story, pal! You’re not fooling anyone. We saw you paint Jotaro and slice him up with your magic paint brush, if you’re an evil wizard I think it’s better to be honest up front. Kakyoin hands Jotaro a handkerchief to mop up the fountain of blood pouring from his busted leg. While he seems like a nice guy, he makes some weird faces at our hero indicating that he’s not entirely “on the level”…not that you didn’t already know that from the previous scene. He walks away after idol chit-chat but leaves behind a deadly aura of hate and murderous intent, something Jotaro both can handle yet doesn’t entirely like so he treads lightly around the transfer student just until he fully figures him out. This scene is immediately trailed by that of one spotlighting DIO in the present. Somewhere in the darkness of a foreign country, the Joestar family plague speaks about his new-found powers and those of Jonathan’s ancestors. The scenes transitioned well and gave off a massive hint that Kakyoin wasn’t just acting on his own accord, that it has something to do with DIO much like everything that I’m sure will go on in this series. Before his monologue ends, DIO mentions that he’s aware of Jotaro and his Stand ability, revealing to the audience that he’s got eyes around the world constantly on surveillance. Disregarding the fact that he was talking outloud to himself the entire, you get the real vibe that DIO is just as dangerous, if not moreso, as he was when he took down the Joestar family head Jonathan. Kujo and the gang are in for a rough ride. 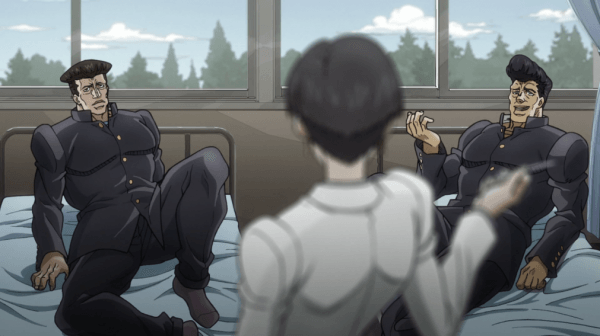 – Time To Check Your Temperature –

Time To Check Your Temperature.

Jotaro, being the health-conscious young man that he is, heads straight for the school nurse’s office to get his leg sorted out before he bleeds to death. Thank God he did because the series would NOT last long if the main character and only hope to saving the world died in the second episode. Walking into the infirmary Jotaro notices that the nurse already has her hands full with two of his “bancho” pals who are faking being sick just to get out of class. I can’t judge them because I did it plenty of times when I was at school. The scene quickly turns dark when Jotaro notices some sort of slithering tentacle reaching up the nurse’s skirt…well, see now my description of the scene makes it sound a great deal worse than  it actually was but just run with it for the time being. She snaps and something about her personality changes drastically.

Holding up a fountain pen she offers to take the boys’ temperatures, she’s clearly not in her right mind and that could have something to do with what I just explained. Stabbing one of the young men in the eye with the pen, Jotaro comes to the full realization that this must be the work of the mysterious young man in the green school uniform. Quickly reacting to the possessed nurse’s movements, Jotaro manages to pull away from the scuffle with nothing but a cut to his left cheek. Kakyoin appears and proceeds to explain exactly what’s going on in true “shonen” anime fashion so Jotaro jumps into action, locking lips with the young woman and having “Star Platinum” pull the “evil spirit” out of her. Kakyoin begins to feel the pressure but he wont let Jotaro know that: “Feel the attack of my Stand, Heirophant Green!” he exclaims as he counterattacks the counterattack. It’s time to throw down, Stand style. 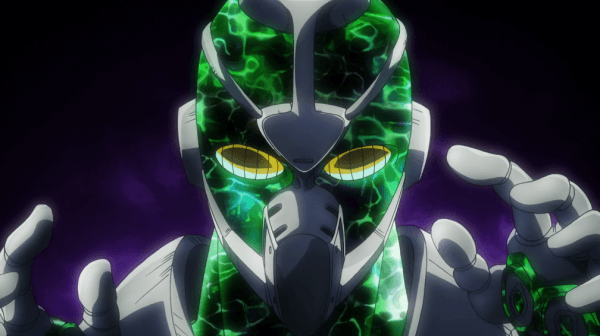 “Emerald Splash!” the young man screams as the odd, melon-resembling Stand shoots a flurry of green stones at “Star Platinum” and Jotaro. Our hero takes a lot of damage from that one attack but he’s not quite ready to back down. In true “bancho” style, Jotaro stands tall and explains exactly why he’s better that Kakyoin: “Even I know nauseating evil when I see it. Evil is when you use the weak for your own gain and cursh them under your foot. Especially a woman! That is exactly what you’ve done! Your stand isn’t visible to the victim or the law. Therefore…I shall judge you!”, this scene made the hair stand on the back of my neck, it really highlighted the fact that he is an incredibly well-written character that can spout seemingly silly, “shonen-type”, one-liners while yet not do it in a way that is cheesy or cringe-worthy.

The reactions, the colour change and the all around great timing of dialogue, music and action sequences in this segment of the episode were all brilliant. Earlier I made fun of the series for being incredibly flamboyant and over-exaggerated, while I still stand by my statement I would also like to add that the series does a brilliant job at pumping up audience members. “JJBA” is one massive hype of and within itself, no other series could do it as well without coming off as having some level of ego or self-importance. Jotaro is probably one of my most loved anime characters of all time and this scene right here gave me a sense of justification I didn’t even know I was looking for. Not many characters can do that but the ones who can are the ones that are remembered for eternity. 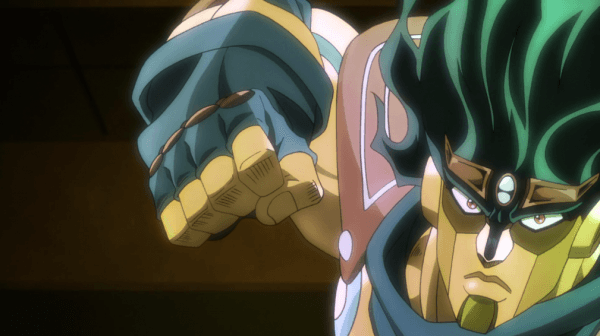 The final scenes of this part of the episode are basically just “Star Platinum” beating the “life” out of “Heirophant Green” which is so great to see because, by this point in the epsiode, audiences have really grown to dislike Kakyoin but to love Jotaro. A swift right hook to the face sends Kakyoin and “Green” into semi-stunned state wherein which “Star Platinum” has all the time in the world to doll out a flurry of punches, ending the duo with a powerful uppercut that I felt while sitting in my living room watching it. Sometimes anime dishes up some extremely rewarding scenes that just make the audience feel super…this was one of them. “Heirophant Green” slinks back into wherever it is Stands go when they’re not in fisticuffs and Kakyoin hits the deck for a bit of “shut eye”, if you know what I’m saying. Jotaro being the good grandson that he is decides to grab Kakyoin and take him back to see old man Joseph.

It’s good to see he’s taking not of what the old guy is saying, it could mean life or death in a series like this. Quickly looking the young man over, Joseph notices something that he deems to be quite dangerous and he was right to do so. It looks like what I thought at the start of the episode was right; Kakyoin is under the influence of DIO’s power and the source of it is coming from what looks like some sort of alien egg lodged in his forehead. Joseph states “It’s too late for him. In three days he’ll be dead” but maybe, just maybe three days is enough time to break the connection between the two and recruit this guy as the next member of the “Stardust Crusaders” crew…but, they never really said that so we’ll have to wait until the next episode to see exactly what’s going to go down next…or you could read the manga but don’t do that! Let it be a surprise! 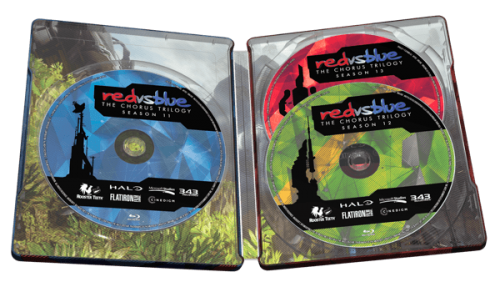 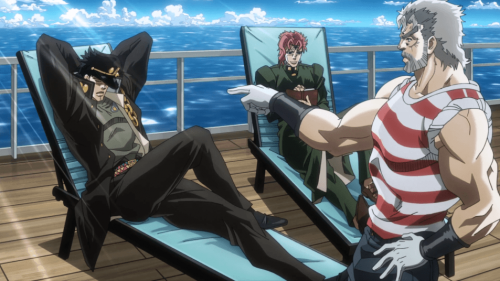