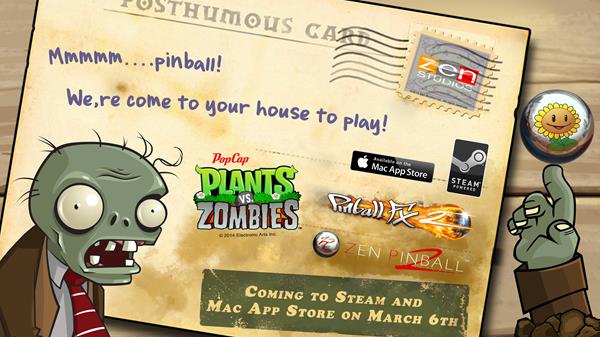 As with most popular franchise it’s of no surprise when a spin off is made, with one of the most popular choices being a pinball game. With the immense popularity of Popcaps Plants vs. Zombies series it was of no surprise to see this happen once again and now Mac and PC users will be able to join in the fun as Plants vs. Zombies Pinball will finally be coming to those platforms after being made available on consoles some time ago. Created by the masters of virtual pinball, Zen Studios, Plants vs. Zombies Pinball challenges players to repel the Zombie invasion by growing your plants and collecting sunlight.

This table can be purchased as DLC for Pinball FX 2 or Zen Pinball 2 on a wide range of platforms already including PlayStation 4, PlayStation 3, PS Vita, Xbox LIVE Arcade, Wii U. The table will be available as DLC for Pinball FX 2 on Steam and for Zen Pinball 2 on Mac from March 6th. Pricing for the Mac App Store comes in at $2.99 so we expect the game to cost a similar price on Steam when those versions release. You can check out the trailer for the table below. Watch it, there’s a zombie trying to play pinball.