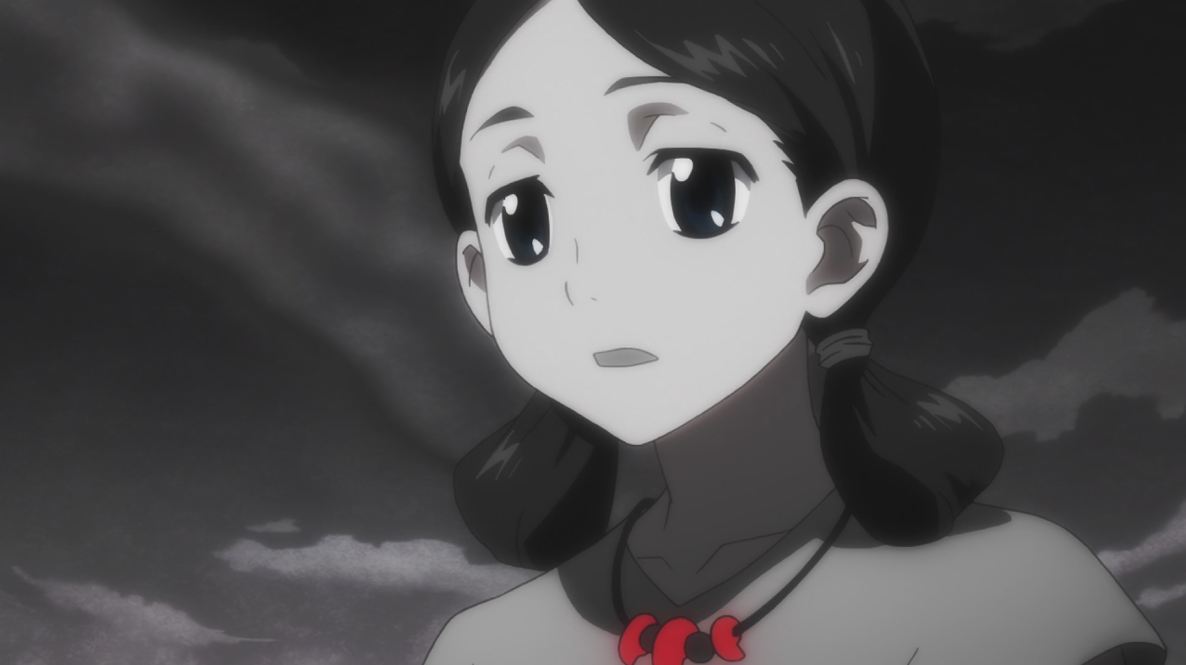 As Sio spent the early parts of last episode in a hospital bed, she received a small gift from an unexpected person: the Commander. A brief moment that expressed the idea that perhaps the head of DOGOO is more than just a stern figure. This week tkaes that concept and runs with it, as we receive a glimpse into the interesting life that the Commander has led these many years.

Long ago, when she was just a young girl, the Commander was left the sole survivor of an attack that decimated her village. It was at this point that the mysterious DOGOO (the alien) appeared and decided to utilise her in his quest for E-Genes. Now the first thing you might notice about this particualr encounter, is that it takes place in the year 248…yeah. I guess that makes the Commander a little older than she looks. Resigning to DOGOO’s ship/base/thing, she is placed in a glowing green tube (the same present in a number of previous episodes) and locked in suspended animation. Though awakening only briefly every couple of hundred years, we catch glimpses of the strange relationship developing between DOGOO and the COmmander. Though a crucial task in humanity’s existence, DOGOO never once forces her into anything, allowing her to serve of her own free will. It’s interesting to note that this is the same viewpoint she adopts as the head of DOGOO (the organisation), showing that perhaps the alien helped to shape her own beliefs. 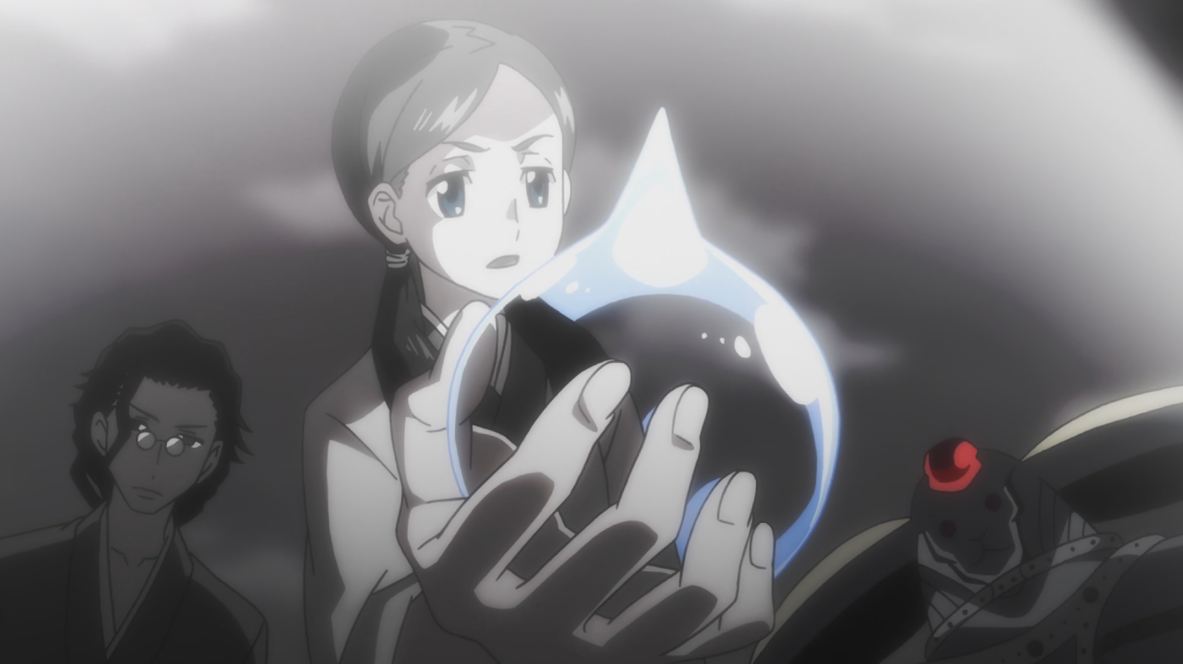 What is the weight of a human soul?

At some point in their journey through time, DOGOO picks up Saint Germain, to serve as the Commander’s interlocutor. Though an impressive sounding title, it merely means that it is Germain’s job to talk to her. This expresses that, though an alien, DOGOO still understands that the Commander must be lonely and possess a sense of empathy towards his companion. IT is also at this point that we learn that Saint Germain was once a prisoner in his time…also that he’s immortal. Kind of a big deal that second part isn’t it? Though it remains unseen, it can only be assumed that during the Commander’s hundred year slumbers, that Germain continued to aid DOGOO in the search for special genes. Either that or they sat around doing nothing.

One of the most interesting things to note from this episode is the fact that it was actually the Commander who sought out the various “heroes” who would lend their genes to the fight for humanity. It is for this reason that the E-Genes chosen are so varied in nature. For example, when faced with countless brave and fearsome warriors, she opted to gather the genes of a man who possessed great speed (presumably Dai Zong). It is also this desire to choose skilled heroes that led to her eventual falling out with DOGOO. Desiring an army of great power, the alien sought to gather the essence of Nobunaga, a task we all know he succeeded in. However, the Commanders compunctions about enlisting the help of such a ruthless seeker of war, led her to run away, thus creating the need for DOGOO to approach Nobunaga himself (as we previously saw). Beginning their lives anew, we see a snippet of the time that led to the Commander and Saint Germain becoming so close, being the only family they have left. Unfortunately, history has a habit of repeating itself and, for the second time, the Commander’s home is razed during a siege. However, it is this traumatic event that steeled her resolve and forges her into the stoic leader we all know and respect. Though it was definitely nice to see that she too has a softer side, one not shown in the series thus far and one that will hopefully continue to shine through. 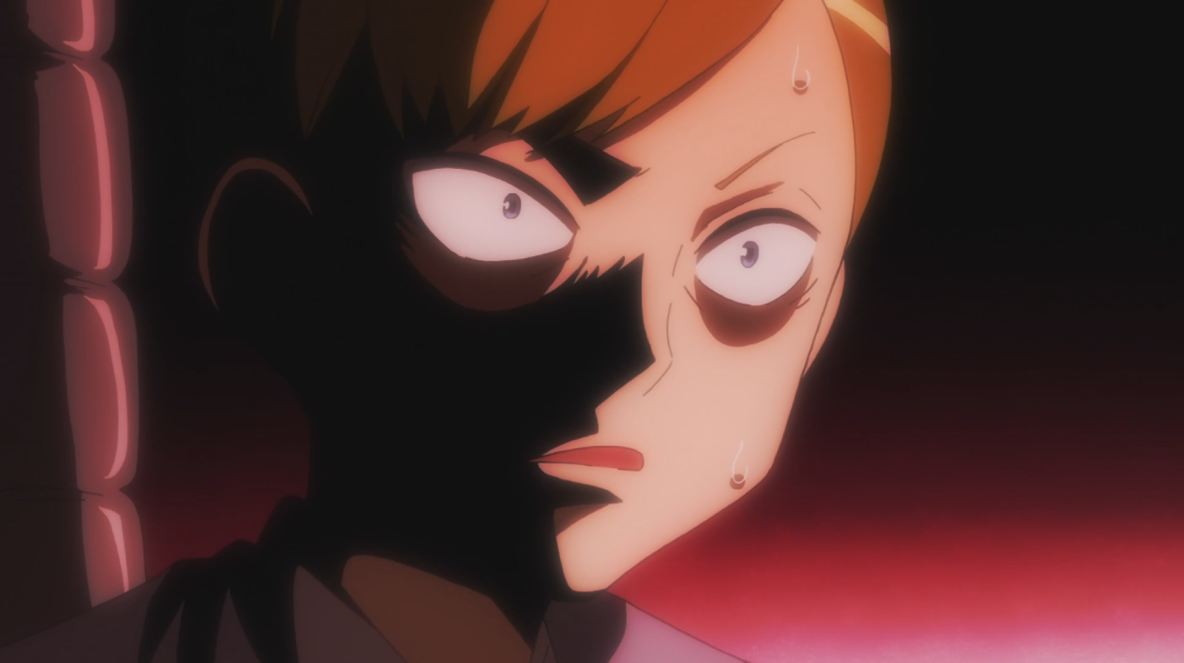 Behold the face of disbelief

It is also revealed that the alien who so strongly desires to protect Earth carries some sort of terrible burden. This mysterious element is strong enough that his very body is in the process of breaking down. It is for this very reason that the Commander placed DOGOO within the green tube where we most often see him, returning the favour of life he gifted to her long ago. Hopefully future episodes will delve further into DOGOO’s past, exploring his life before journeying to Earth. There’s still just so many mysteries.

Back in the present, DOGOO (the organisation) is in shambles as a plan is developed to defeat the menace that dwells within the tunnel. In the meantime, Jack decides to act anime savvy and asks Sio about her tactical acumen, with her having been the only one to anticipate the attack on the Clayton Forrester. He reveals that he knows her E-Gene has been speaking to her and explains that the spirit of Jack the Ripper himself is asking for her help, lending to his apparent skill at sensing danger and the best way to combat it. What’s interesting about this exchange, is the revelation that Jack  tap into his E-Gene without his AU Weapons in hand, something that Sio achieved in the last episode. Though it still remains unknown if she is the only one capable of forming a weapon through willpower alone. We also see that her dance routine was not a one off and serves to focus her mind, allowing her access to Nobunaga’s memories. 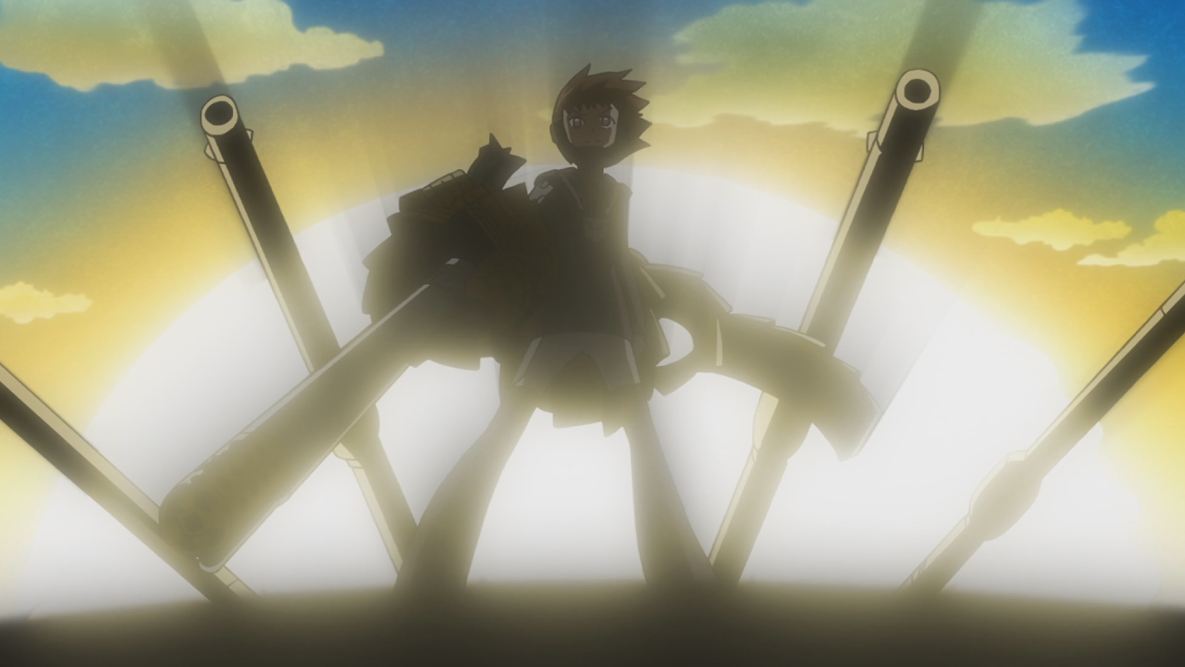 All this being said, the best part of the episode by far was watching Sio finally come into her own as a DOGOO operative. Though initially hesitant about explaining her thoughts to the planning committee, she taps into her dormant courage and almost outright states that they’re current plan is wrong. Now, am I the only one who thought it was awesome watching Vidocq sit in shock at the fact that he, the “smartest” E-Gene Holder of them all, made a mistake? Because it was pretty cool. It also revealed that, while his Easy Chair is able to crunch every conceivable number in any given scenario, he must first have a concept. An idea. Something which he occasionally misses, adding a human element to his statistical power. That being said, he did accept Sio’s conjecture and swallowed his pride for the sake of the operation. It was also nice seeing the other members of the First and Second Platoons praise Sio for coming up with such a thorough plan of attack. See, they do care about each other after all. Isn’t that sweet?

With Nobunagun’s latest plan set to launch, you better believe that next week will be action packed. Will her strategy pay off as predicted, or will an unexpected variable descend chaos upon our heroes? I guess we’ll have to wait another week and see how Operation Stone Forest plays out. Which, by the way, is most probably a reference to manga artist Shotaro Ishinomori (with “ishi no mori” being the Japanese translation of “stone forest”). That’s what you get for letting an otaku name your strategies…