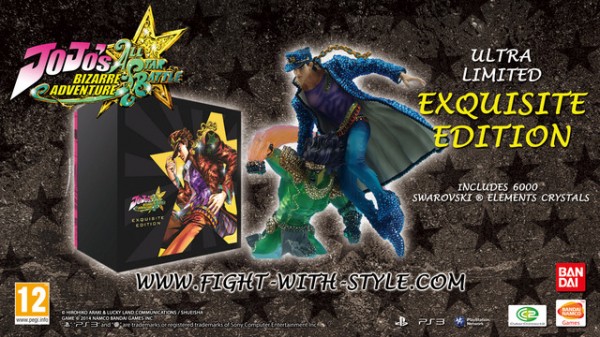 Contrary to what I had thought in the past, it seems as though European Anime fans are the most flamboyant in the world…I mean, they must be seeing as the newly-announced, European-exclusive, special edition release for the upcoming PlayStation 3 and PlayStation Vita title “JoJo’s Bizarre Adventure: All-Star Battle” has been announced and it looks like it will be coming with a bedazzled figurine of the “Stardust Crusaders” hero Jotaro Kujo.

Late last year Japan was graced with the release of this ultimate shonen title, they were also offered a special edition of the game which came with a brilliant-looking statue of Jotaro Kujo and his stand “Star Platinum” in action (as well as some awesome other extras)…European gamers WILL be getting a release similar to the Japanese one, the difference is small but…quite noticeable as you can probably already see from the image above. Namco Bandai Games announced that the “JoJo’s Bizarre Adventure: All-Star Battle – Ultra Limited Exquisite Edition” alongside the standard release of the game will be getting a release throughout Europe on the 25th of April.

No actual price has been announced for it yet but you can bet that it will be reported on here as soon as the news breaks. For now just revel in the beauty of this glistening figurine down below in our gallery section and don’t forget to hit up our comments section to show your excitement for this upcoming release.

Update: Namco Bandai UK have contacted us directly explaining that there was a bit of miscommunication regarding this particular piece of news. The “JoJo’s Bizarre Adventure: All-Star Battle – Ultra Limited Exquisite Edition” is available only in the UK and only as a one-off sale where proceeds will be going towards charity.