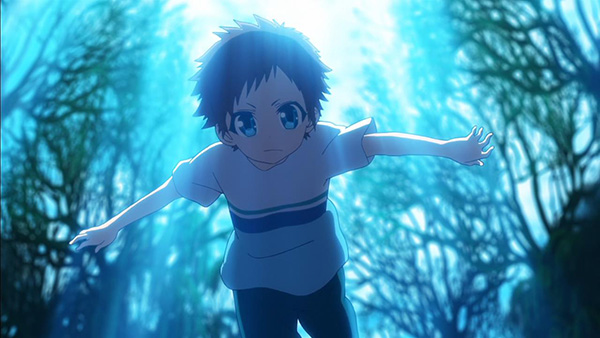 Following episode 18’s eventful conclusion, Manaka has finally been brought back to the surface but she still remains in a deep slumber, unable to wake up. After a close examination, it appears she has indeed lost her ena but is otherwise healthy and expected to wake up soon. But this episode isn’t about that. The anime’s plot swerves back to Chisaki and the complex character interaction that surrounds her.

Five years on from the fateful Boatdrift Ceremony, Chisaki still admires Hikari. A brief, childhood memory of how Hikari rescued both Manaka and Chisaki from being lost is recalled, and Chisaki knew that Hikari would once again find a way to rescue someone again. 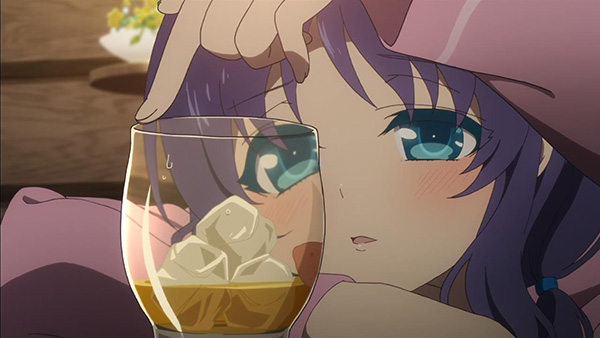 As Manaka lies asleep, Miuna spies Hikari speaking to her who in turn is discovered by Chisaki. Smiling, Chisaki notices that Miuna likes Hikari too and realises that Miuna is now the same age as she was. Even more, Chisaki is shocked to realise that she herself is now approaching Akari’s age from five years ago. Time stands still for no one, except for the forgotten Sea friends it seems.

Tsumugu’s grandfather, who is being looked after by Chisaki, spills the beans on a continuation of the legend of the Sea God and his sacrifice. Which we find out about later on. Apparently he let the girl go, but took something in return. This is exactly Manaka’s situation. 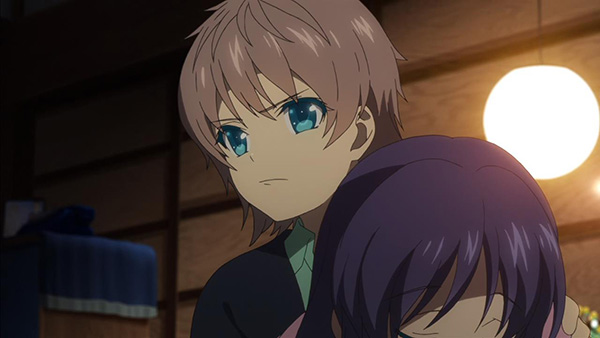 The juiciest part of the episode is Kaname’s growing hostility to Tsumugu. Try as he might (and boy that kid tries), he can’t help but feel jealous of Tsumugu spending all this time with Chisaki. He also disagrees with Tsumugu’s plan to withhold the data gathered from last episode’s adventure until it’s officially presented to the scientific community. Without funding and recognition, Tsumugu’s research into Shioshishio will flounder along with any hope of understanding the disaster.

Kaname leaves the dinner table after Chisaki defends Tsumugu, calling her adult-like. But it seems he’s wrong, as Chisaki is still a kid at heart when we see her putting on her old school uniform. Unfortunately she didn’t foresee it being too small and the result is the typical walk-in scene we see in anime as she is caught scantily-clad and tripping over. After getting drunk on non-alcoholic wine, Chisaki herself states that she may have grown physically but not emotionally before passing out on the table. 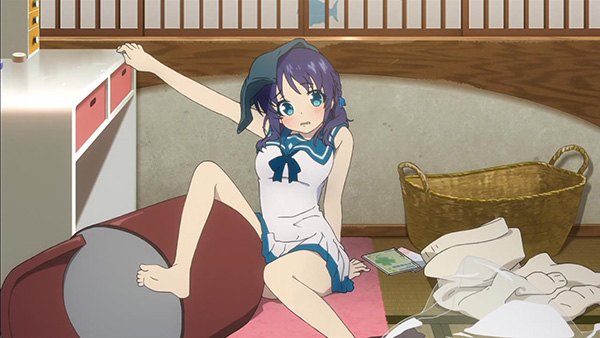 I think here, at this point, we see Tsumugu display the first sign of affection towards Chisaki, touching her hair while she sleeps. The whole time he spent with her he’s acted responsible, caring for her yet not stepping over any lines. A not-too-pleased Kaname catches him doing this, but Tsumugu isn’t even phased. Admitting his feelings but also thanking Kaname for saving him that night, saying he’s glad they’re all back.

Interestingly, Kaname says that a thought crossed his mind that if he didn’t save Tsumugu, Chisaki would be all his. Tsumugu sardonically replies that if Kaname ended up being that kind of person, he wouldn’t let him have Chisaki. 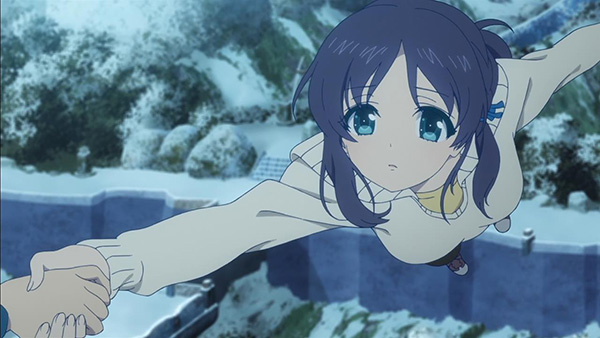 The last act of the episode sees Chisaki attempting to visit Shioshishio on her own but is caught in a strong current. In an repeat of her childhood, Hikari saves her again and has a friendly chat with her on the sea bed. She reaffirms to herself that she hopelessly still loves him. Funnily enough, this whole time Hikari still doesn’t realise this and turns every conversation into a fun and totally positive exchange.

The two set off to find Lord Uroko in order to verify the old man’s story about the Sea God taking something from Manaka as he released her. Meanwhile, Manaka is still asleep just waiting to be awoken. Hopefully soon! So what have we learned? Tsumugu and Kaname both love Chisaki and both are aware of each other’s feelings. Chisaki, meanwhile, still hasn’t answered Kaname’s confession and continues to pursue Hikari. The love triangle is only getting more complicated. 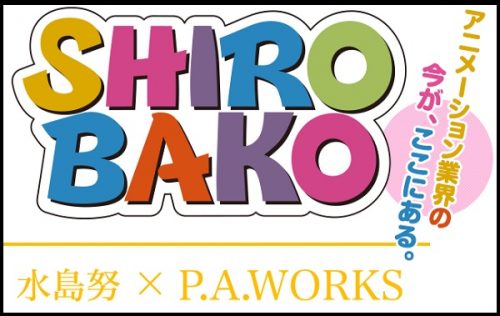