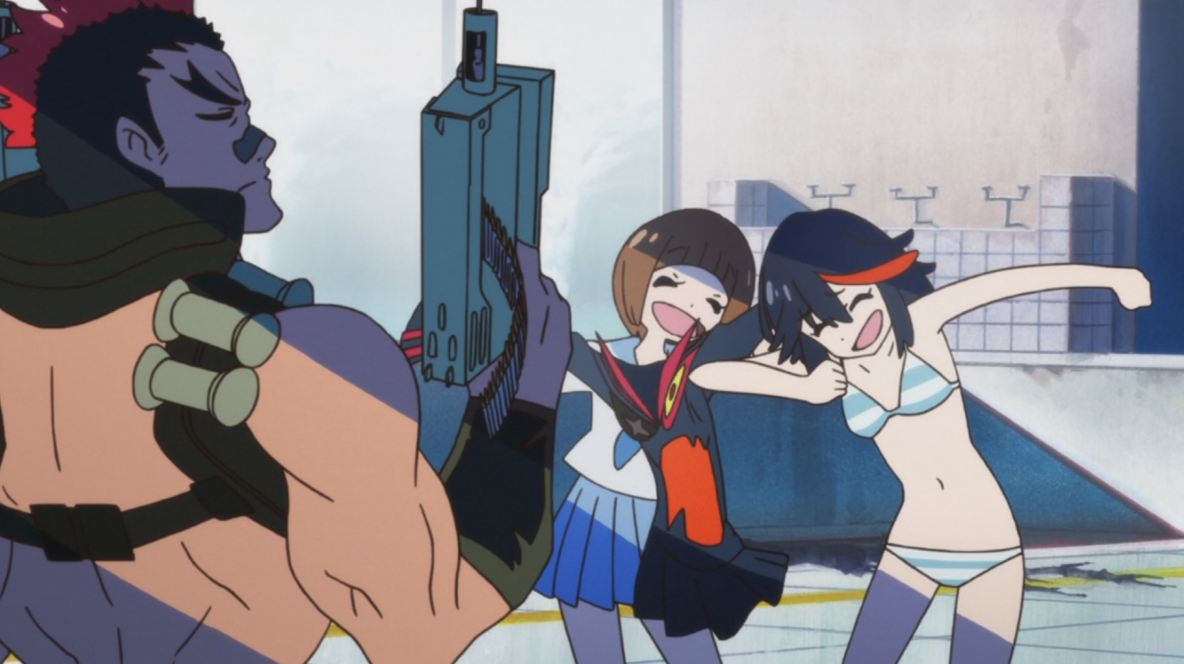 Two Girls, a Guy and an Alien Sailor Fuku

Well the hits just keep on coming don’t they? Following last week’s exposition overload, we get the chance to see the plot take another leap forward. Not only do we witness Ryuko’s realisations regarding her own anger and thoughts on the developing situation, we also get a front row seat to the biggest revelation to hit Satsuki since…never. It has to be the most crucial, character defining moment that we’ve ever seen…and it is awesome. 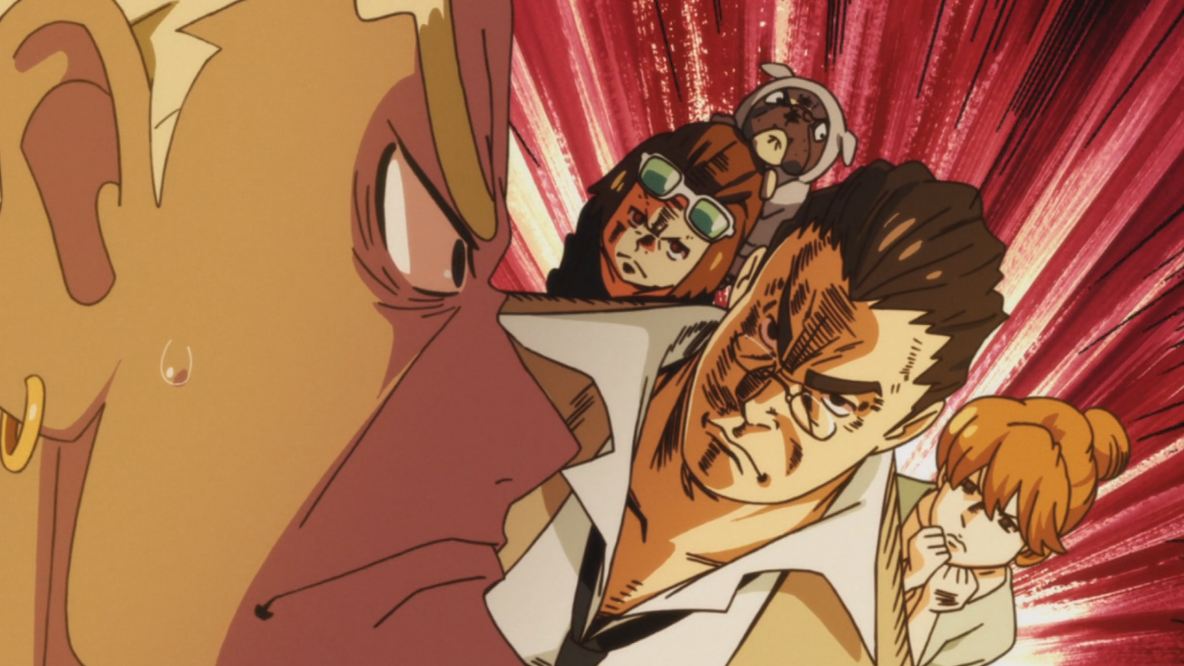 Time to see what a real MANkanshoku can do

Though ready to duke it out with Tsumugu, a timely intervention by Mako and Senketsu quell Ryuko’s temper and subside ill feelings between the two. For now at least. Though just another of her oddball performances, amidst the rambling we learn that Mako has indeed understood the explanation regarding the Life Fibres. In her own special way of course. Her noting that Ryuko must care deeply for Senketsu to let him cover her body shows that she finally understands the truth behind the uniform. That being said, she has always understood its importance to Ryuko and accepted her desire to cling to it no matter the personal cost. This sentiment of selfless compassion is also carried in Ryuko’s anger. As much as she is overwhelmed and upset by the truth of the Life Fibres, her first reaction is to speak on Senketsu’s behalf. Though she tries to conceal her intentions as a misplacement of her own anger, she cares for Senketsu very deeply. This expresses remarkable progress in their relationship. There was time when she was embarrassed to even wear Senketsu and now the two act together in harmony. It’s quite beautiful really.

Amidst the friendly chaos of Kamui and schoolgirl, we also see a glimpse of Tsumugu’s kind side. Despite his very vocal hatred of Life Fibres, he subtly expresses a sense of joy when he sees Ryuko and Mako having fun with Senketsu. It is the revelation of his past that makes this moment of compassion all the more poignant and sweet. Having worked with Dr Matoi, Mikisugi and his sister on the anti Life Fibre project, his sister was killed in a failed test. Though harbouring resentment to Fibres for robbing him of his family, the notion that they can be friends with humans serves as a testament to his sister’s own beliefs and an extension of her will to a certain degree. Proof that her sacrifice was not in vain. 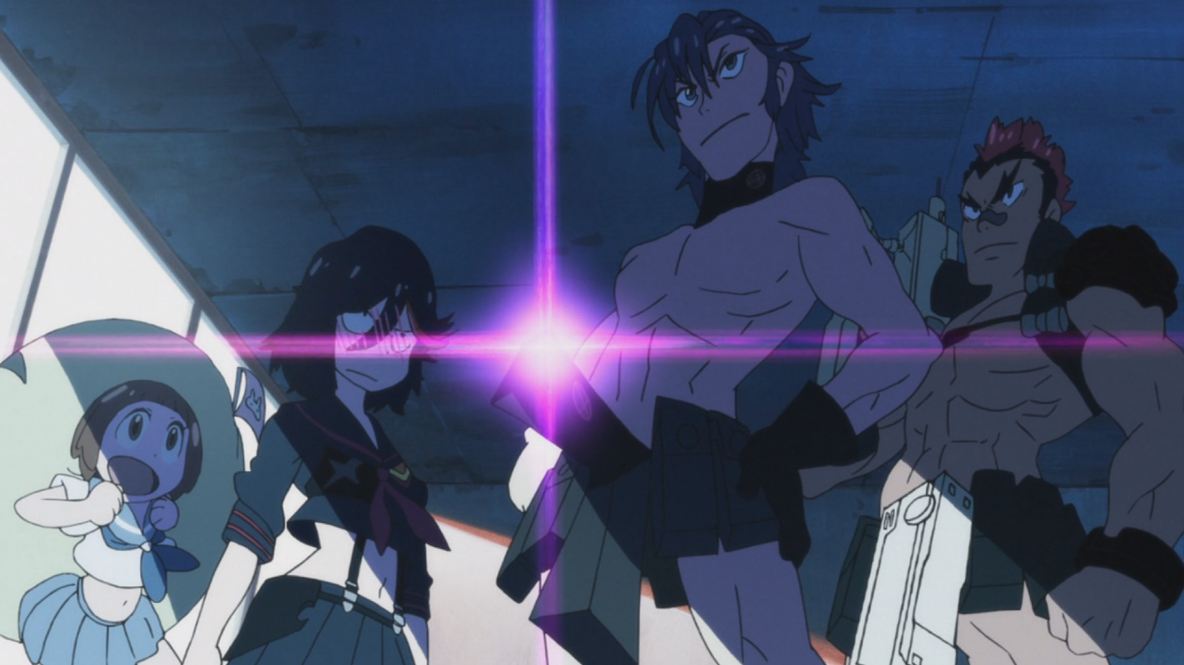 Once more we are also provided a look into the softer side of Satsuki. Honestly, it’s starting to become a habit for the anime. Almost like they want to redeem her to some degree. To make us like her. Say, on the slim chance that she ever turned out to be less of a tyrant than she was always perceived to be. Oh wait, that did kinda happen. You may have missed it. It was that part where she STABBED HER MOTHER THROUGH THE HEART! So yeah, looks like Ragyo may have made a slight miscalculation in giving her daughter near absolute power over an army. During her declaration of rebellion, there was a certain truth to Satsuki that was never there before. The rage she expressed possessed an honesty that her distant dominion over Hannouji lacked, as if her rule was purely business. You know, in addition to being a rouse on her part. Curiously, her actions bring portray her as much more similar to Ryuko than she would care to admit.

Despite her daughter’s betrayal and her own subsequent impalement and crucifixion, Ragyo Kiryuin is apparently not down for the count just yet. The sheer fact the Satsuki explains her future plans and still notes Ragyo as the enemy, shows that the rainbow producing CEO is just a touch more vulnerable than a mere mortal. If the fact she can still talk after losing a metric ton of blood wasn’t proof enough already. A fact that certainly does not bode well for all who oppose her, like Ryuko…and Satsuki. The fact that she is also the number on messenger of the Life Fibres is also bound to factor into her true strength, as hinted earlier in the episode with her collection of twine. Unlike every other example of the aliens throughout the series, Ragyo has Fibres of different colours, no doubt an indicator of power. It also might explain her luminosity. 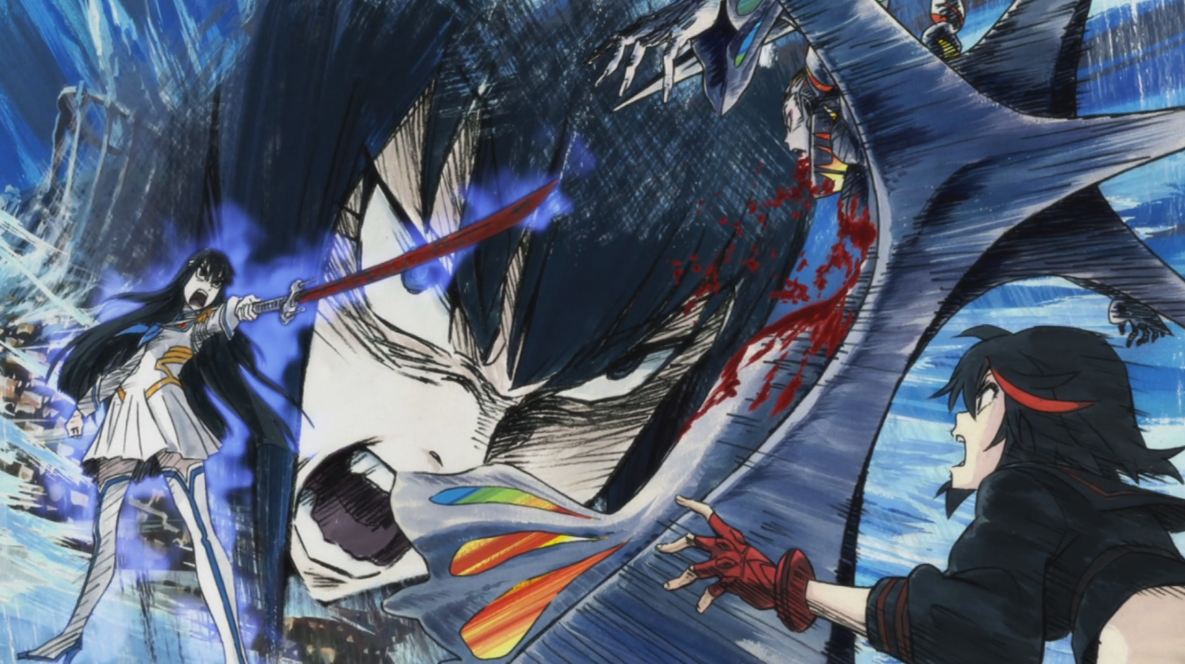 She’s just at that rebellious age

Hopefully all these questions and more will be answered next week. And what a week it will be. Can’t you just feel the betrayal in the air? Isn’t it good to see a villains plans crumble? But who knows, maybe we’ll learn something about Ragyo that will make us see her in a different blinding light. Some kind of trauma that inspires sympathy perhaps. I guess we’ll have to wait and see. Personally, I’m more interested in seeing if the new opening sequence was indeed foreshadowing a team up between Ryuko and Satsuki. I hope so, because that would be awesome. 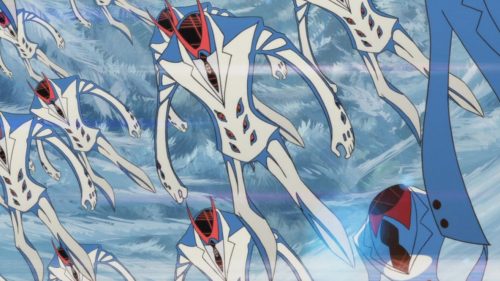