When cultures clash, stuff will explode

It was inevitable really. I mean, Saints Row IV continues to go above an beyond in the hopes of breaking the crazy scale and have you ever watched an anime series before? Those things are insane. Awesome, but insane. So strap yourself in and watch in awe as these two worlds combine, albeit only briefly.

Finally, the fantasy of Eastern cultural happiness can be yours! Get hair defying the elements of winds! Slice many of the people of bad with Braver Sword! Kaiju-XL makes little of foes with speed and curiosity! Also dress up clothing changes any Street of 3 Holy Man a beholding wonder!

In addition to the awesome anti-Godzilla gun and sword that totally isn’t the Buster Sword from Final Fantasy VII (didn’t you see the different name?), you’ll also receive a frilly pink J-Pop style dress and hero outfit that totally isn’t taken from Cloud Strife…who are we kidding? Ah well, you know what you’re getting into when you make the decision to play Saints Row. The Anime Pack is available now on Steam for the low, low price of $2.99. Thanks Deep Silver! So check out the screenshots below and take refuge in audacity…it’s the only way you’ll stay sane in this crazy world.

Saints Row The Third Remastered Coming to PC, PlayStation 4, and Xbox One on 22 May 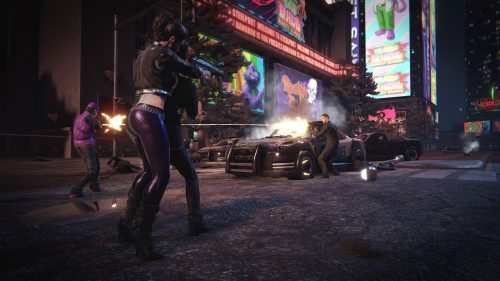