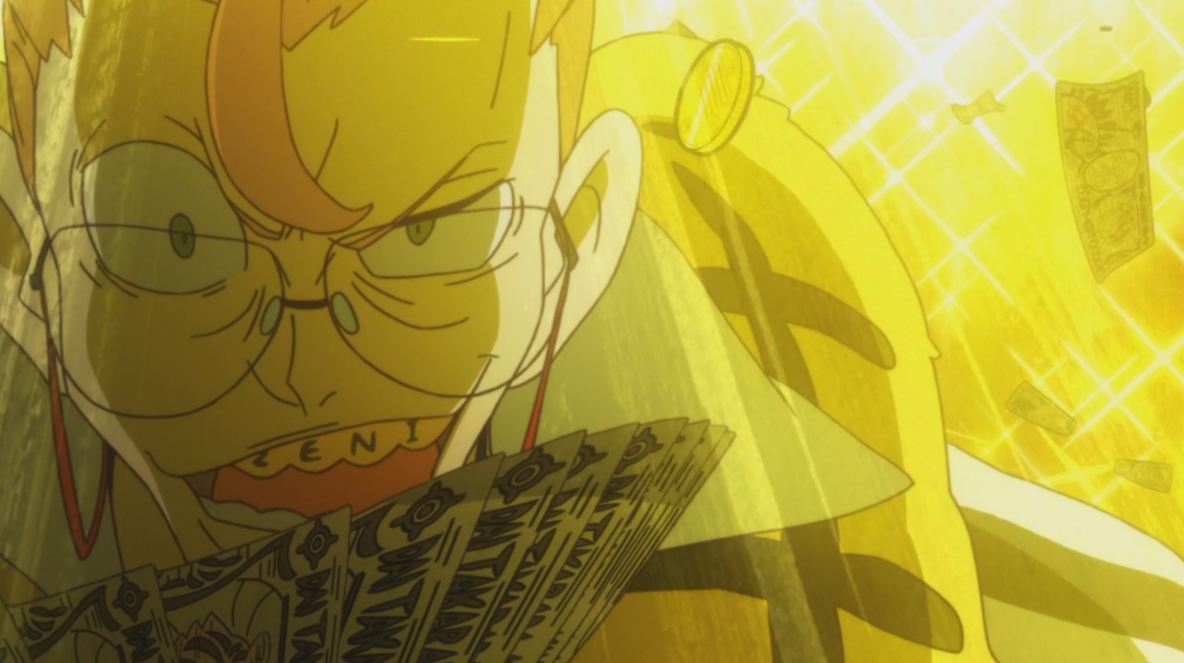 I hear it makes the world go round

Alrighty, let’s take a page from Kill la Kill’s book and cut the intro short. Last episode stuff got crazy. This week stuff also got crazy. There, wasn’t that simple?

With her decision to walk the front lines, Satsuki comes face to face with the final opponent left standing in the Tri-City School Raid Trip: Osaka…like the whole city of Osaka. Led by the wealthy Kaneo Takarada and fuelled by greed, a fact which disgusts Satsuki, the town leaps at the President. They are of course immediately halted by the domineering Dictator and subsequently flee. Just in case you hadn’t realised by this point, not sure how that’d be possible, Satsuki cuts an intimidating figure. Anywhat, Rich Boy Gold decides to reveal his ultimate weapon: a big, gold crab robot thing. It’s more imposing than it sounds…I think. Looks aside, the crab-bot does a rather impressive job of dispatching the lowly One Stars in rapid succession. So I guess if there’s one thing to take away from this episode, it’s that money is the key to everything (Note: That was a joke. Money’s cool but remember friendship and love and stuff too. I heard it from an anime, so the info’s legit). 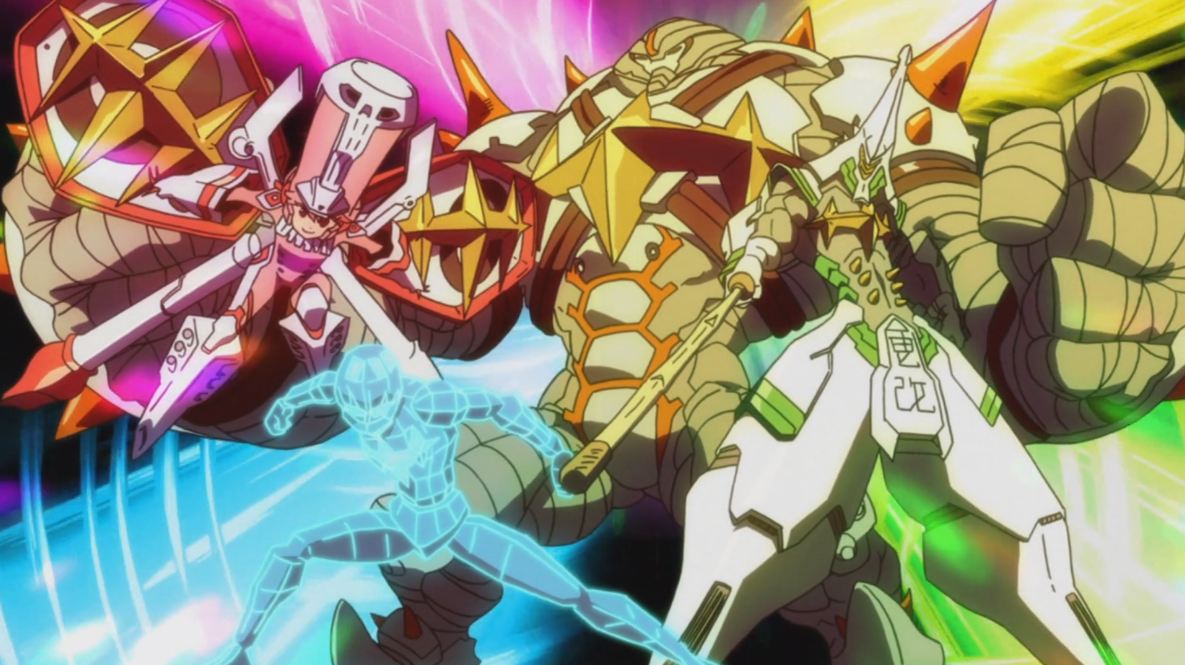 Borrowing classically good guy moves, the Elite Four turns up just in time to protect their precious President and dole out some old school Hannouji justice. Rockin’ some stylish new threads, Sanageyama unleashes a new power: Blade Regalia MK III. Some flashy dodges, the old Men-Dou-Kote and the last, creepy hope of Osaka falls. I gotta say, this had to be one of the weirdest fights in the series thus far and that’s saying something, you’ve seen the show. From the inclusion of crab paste, to the very aggressive and incredibly suggestive method by which Takarada is dispatched, it’s definitely not a fight you’ll forget…no matter how hard you try.

Anyway, with that unpleasantry behind us, it’s time for the main event. Continuing her trend, Ryuko blazes into frame, motorcycle revving and trumpets blaring. What was interesting to note was that, at Ryuko’s appearance, Satsuki was briefly, though quite visibly, shocked. A trend that continues throughout their fight. It would seem that the little Princess is not too happy when she learns that, not only has Ryuko retained Senketsu, but that she has also grown stronger, able to go toe-to-toe with her without even transforming. Maybe she shouldn’t have let Ryuko live when she found her unconscious in the slums? I mean, I’m glad she did…wouldn’t be much of a show without her. 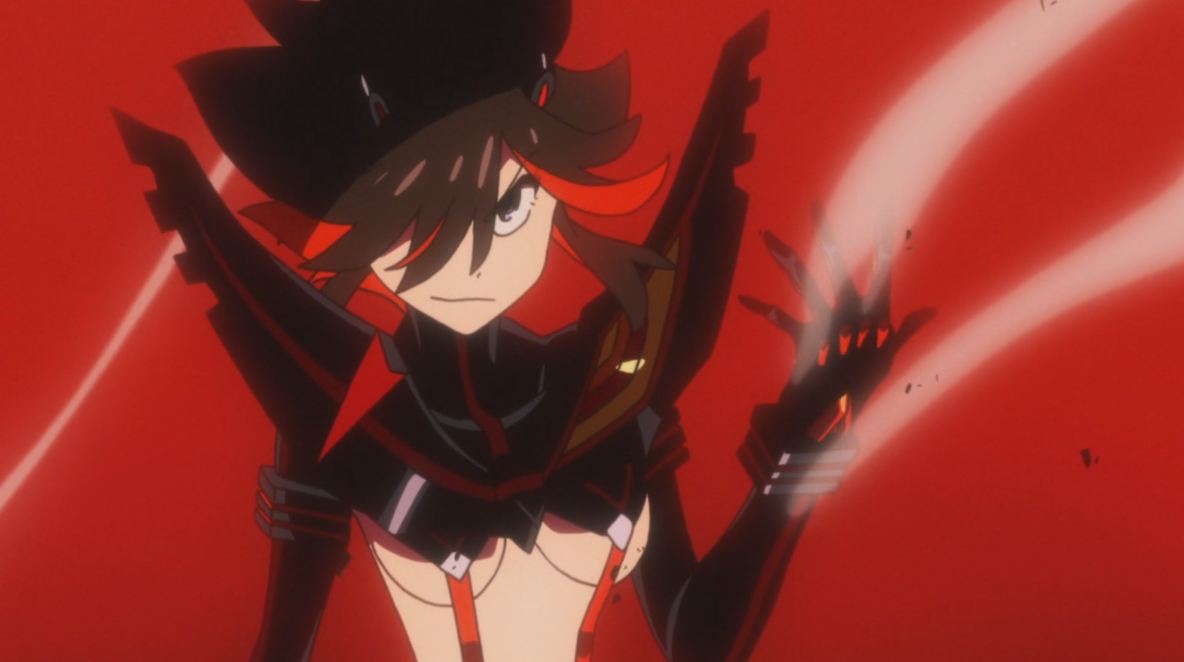 It is also during their clash that we learn some new information about the Kamui themselves. During their transformation, Senkestsu and Junketsu exude large amounts of Bio-Energy. This power courses through the Life Fibres of each and, as such, if a piece is missing, the energy is disrupted. Without her gauntlet, Ryuko cannot unleash her true power…unless of course she was the protagonist, a headstrong one at that. Hmm? She is? Oh well, that’s fine then. Substituting the gauntlet, Ryuko uses her own flesh to complete the Bio-Energy circuit, allowing her to transform. However, the sheer power released threatens to burn away her hand in around a minute. Dangerous stuff. The high stakes of this risk are of course agreed upon during a heartfelt moment between the two, with Senkestsu still coming to terms with just how much Ryuko cares for him. With true friendship empowering them, the duo lunge at Satsuki and steal away the final piece of Senketsu. Now the fight really begins.

Finally revealing themselves, in more ways than one, Nudist Beach takes the stage and provides some much appreciated back-up for Ryuko. It would seem that Mikisugi’s talk was not all bravado and that he really does have an organisation behind him. It also serves to show that the compassion he developed for Ryuko since their meeting has led him to ally with the one true enemy of his cause: Life Fibres. This is a nice act that, coinciding with his ditching of his cover identity, he no longer hides his belief that Ryuko is different from Satsuki, regardless of their similar powers. Following suit, the Elite Four also reveal their own new powers: MK II Three Star Uniforms. Apart from the combat enhancements, the new Regalia are considerably different visually. The new forms opt for a slightly more compact style, taking the best elements from their previous iterations. However, the unfiorms did not get the chance to fully reveal the limits of their new power, I’m sure it won’t be too long until we do. 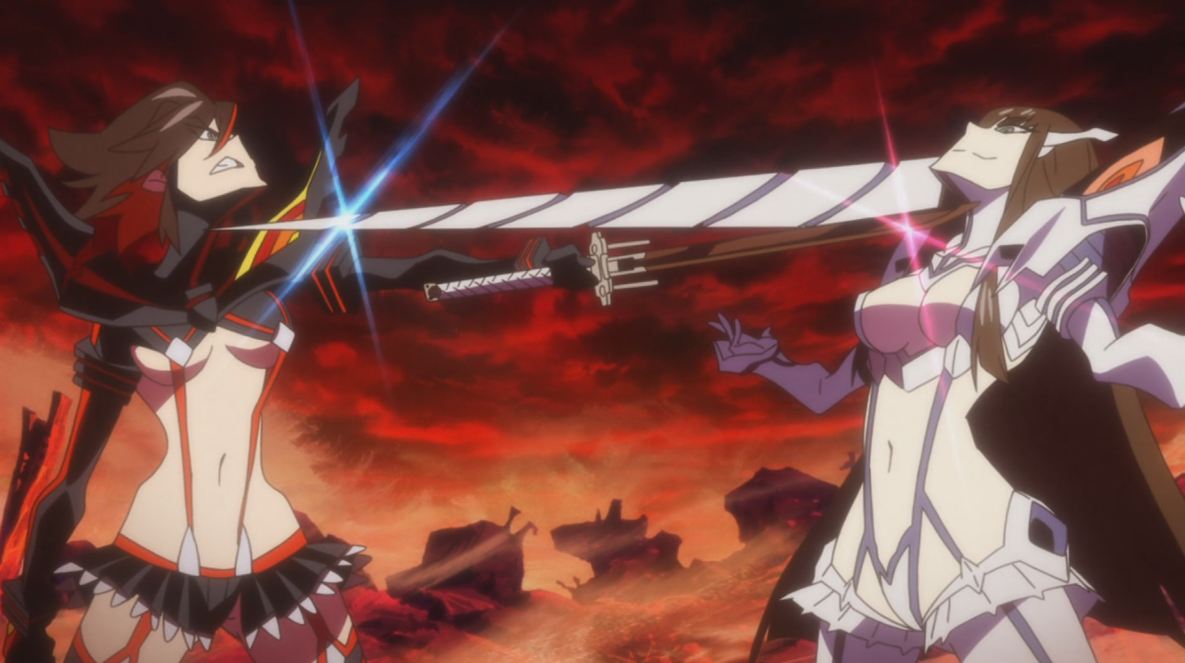 It would seem we have reached an impasse

This episode was quite an important one in the grand scheme of things. We got to see Ryuko visibly shake Satsuki, more so than ever before. More than anger. More than confusion. Satsuki felt surprise. And what a sweet moment it was. Bearing witness to Ryuko’s determination finally putting her on par with Satsuki, ending their fight in a complete draw. Not only that, it was nice to see that Ryuko has leaned from her past experiences emotionally, as well as physically. Her mid battle rant showcases how she wishes to never succumb to rage again. Not that she’s letting go of it, she just will never let is twist Senketsu again. Which is good…because that was a horrible moment for everybody. Her mental focus also allowed her to summon the true power of her Kamui, creating some awesome action sequences that saw the Senjin and Shippu forms get some more screen time. Which was totally awesome.

On a lighter note, the odd relationship between Mako and Gamagoori also saw a little bit more attention. The Disciplinary Head’s strange respect for the girl consistently leads him to try and help her stay out of trouble. Mako’s overall…Mako-ness also makes her the one person other than Satsuki who can stand against the titan on equal terms. It’s as funny as it is heartwarming really. 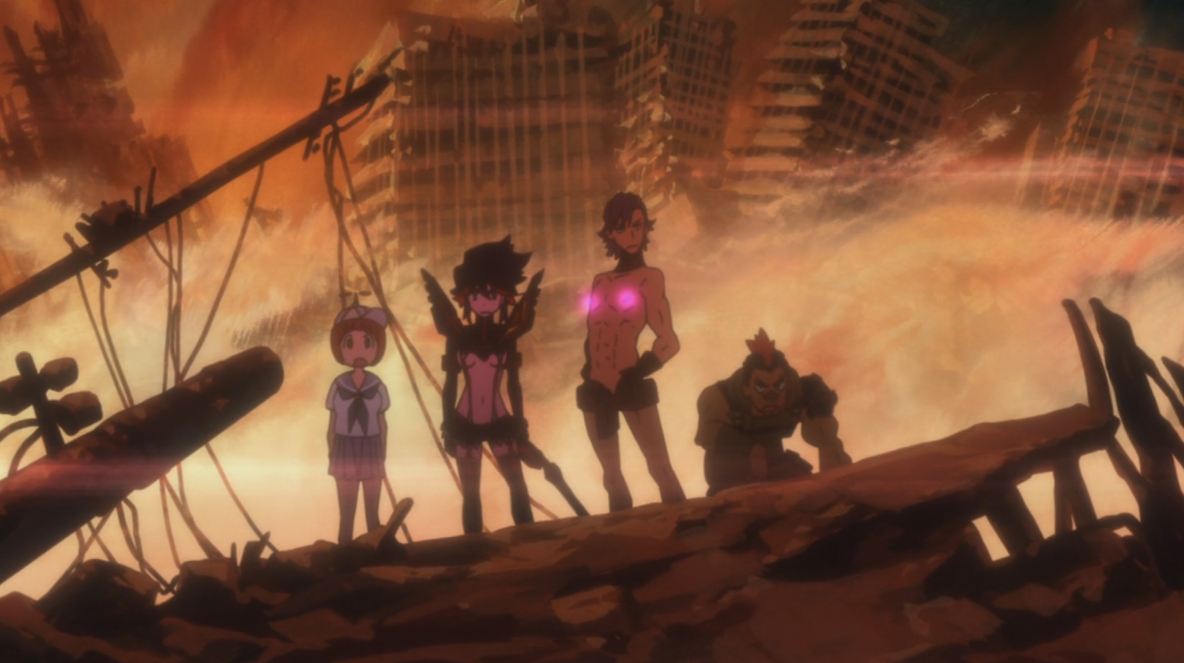 Quite the heroic line up wouldn’t you say?

With their fight concluded, Satsuki agrees to retreat to Hannouji. The Tri-City School Raid Trip is over! Unfortunately for everyone, Satsuki is a rather smart cookie, having already achieved her goal and crippled Nudist Beach. Damn. Amidst planning to regroup and recover, Mikisugi decides to keep his word to Ryuko and reveal the truth about her father. I wonder what secrets that old man kept? I guess we’ll find out soon enough.