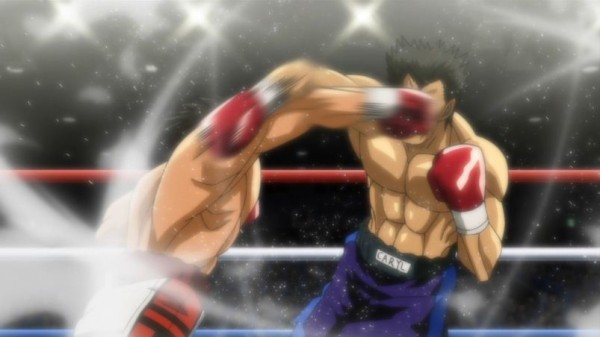 Both Episodes 12 and 13 were released on the same day and I believe they were shown back to back so you’ll excuse me for ending the last episode’s Anime Impression abruptly but know that it to intensify what is looking like the last episode of Ippo’s fight against Ryuuhei, I’m going to jump right back into it: SLAM! Ippo’s attack lands a hit directly into Ryuuhei’s face and he hits the ring floor like a bag of cement, finally Ippo’s counter-counter works! I have to say though, there isn’t a great deal of fighting within this episode, don’t get me wrong there’s still plenty of action but it mostly centres on what the two fighters are thinking and their motivation for winning the fight to which it seems Ryuuhei’s motivation is that of a fairly sad one but did you honestly expect any different from a fighter like him. 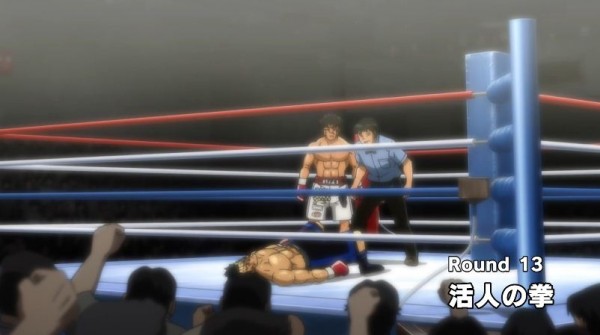 Ippo slams Ryuuhei and he hits the deck, the boxers and friends of Ippo watching from the seats in the stadium all get goosebumps, they knew Ippo was a beast in the ring but they didn’t realise he was this good. Now I want to refer you to what I spoke about a couple episode impressions ago; this new Dempsey Roll that Ippo has developed puts a great deal of stress and tension on his legs and, in fact, his entire lower body so stopping himself like that mid-dempsey is not a very good idea at all but he’s doing it to win and this is an Anime so you can bet he’ll continue doing it until he comes out on top. Ryuuhei manages to get to his feet, blood drips down his face from his eyes but he’s nowhere near ready to throw in the towel and give it all up, the fight continues. 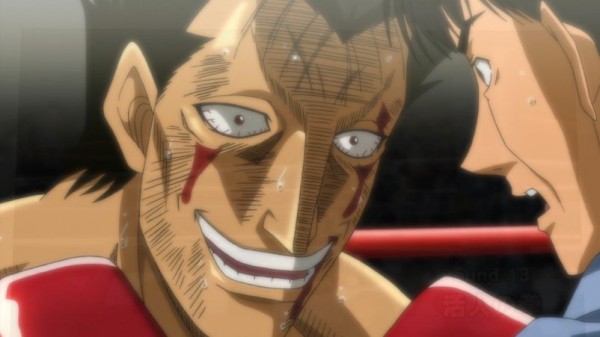 No matter how many times Ryuuhei stands against Ippo, he can’t seem to do anything against him, the tides have truly turned and I love how you can almost see the damage that Ippo has taken being transferred over to Ryuuhei. Because Ippo now has some room to breath, he’s slowely recovering from fatigue whereas Ryuuhei is now feeling the effects of being on the action end of a flying fist and it’s really getting to him. Like I mentioned above; a fair bit of the episode deals with the mental properties of the fighters: Ippo once again looks back on this time in his life, he sees all that Ryuuhei has done, he sees his family and friends backing him up, he sees what he needs to do and that is to defeat Ryuuhei not just for himself but for the honour of the Japanese boxing league, he cannot let a man with no respect for the game win, it just wouldn’t be right and he uses it to fuel his fists. 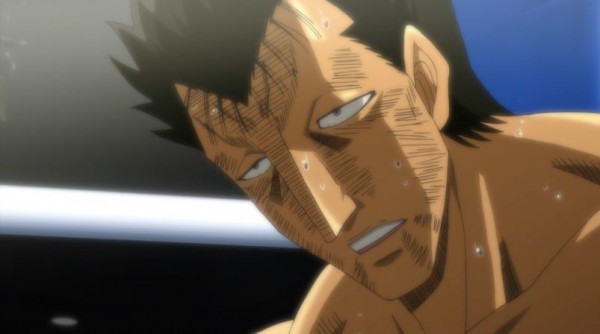 Ryuuhei, on the other hand, has no-one and wants no-one, he’s dark, he’s lonely and the only reason he wants to win this fight now is to prove that you need to do things yourself, you need to grasp things with your own two hands and trust nobody because those people will never come through for you in the end. He remembers the events that lead him to become the monster that he is; the murder of his father by his hands, the abandonment of his mother and his perpetual loneliness. The two fighters, like all in the series, are incredibly contrasted, you favour Ippo’s victory but you’re still forced into feeling some sort of sympathy for Ryuuhei, this man, this demon. The fight kicks off again and after some fairly heavy rumbling, the true fight begins and this time it is more of a race to the finish than anything else. 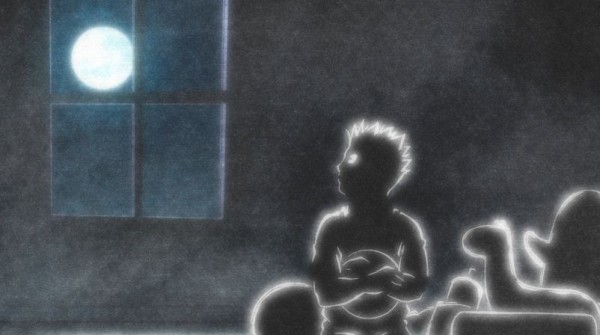 Both men are feeling fatigued despite breathing room or how many hits they’ve taken in the recent moments of the fight, it has been going on for seven rounds and they’re bodies wont last long, both are ready to finish this and both believe that they can. Ippo slides into a Dempsey Roll and the routine stars again; Ryuuhei notices, he jumps back to get a better view and lunges in to stop Ippo in his tracks only this time Ryuuhei has learnt, he’s evolved and instead of following through…he stops just as Ippo shifts his roll and goes in for an attack, Ryuuhei sees that Ippo will miss him and goes in for HIS attack but Ippo ducks out of the way, they were both one step ahead of each other but it just seems as though the hero of our story was one step too far for Ryuuhei. 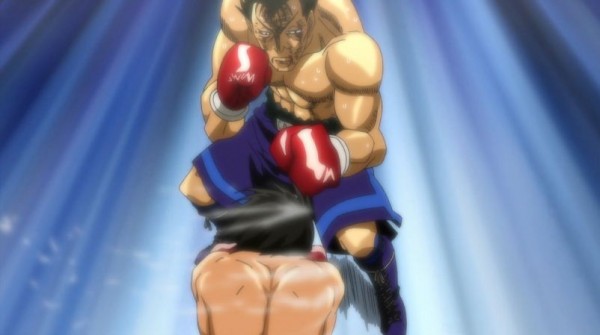 Ippo breaks into a Dempsey Roll that makes contact with Ryuuhei’s head, each punch gets a clear shot of Ryuuhei and he gets pummelled almost to death by Ippo…he falls and the fight is over. Ippo remains the champion. He throws his hands up in the air and the crowd cheers as Ryuuhei is taken away on a stretcher, what a brutal end to what was a brutal match. It ended the way it should’ve; with a Dempsey Roll, even though it was obvious that was how it was going to happen it was still justified because the challenger openly said he would destroy the Dempsey Roll. Ippo made his way out of the ring where his leg muscles were checked for damage and, after using the Anti-Dempsey Roll a fair few times, they were fairly ripped up yet recoverable which was something I didn’t particularly enjoy, I actually would have liked to have seen Ippo retire from the game after fighting his hardest opponent and doing more damage to himself than his challenger could but this is just the way it goes. 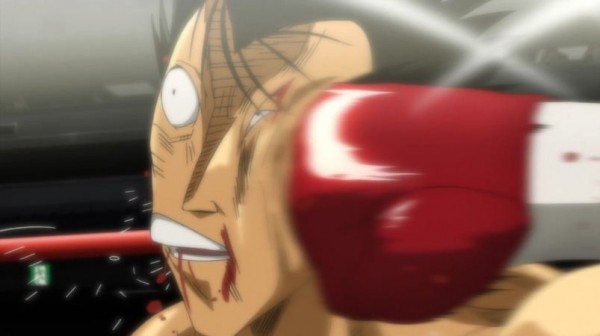 Ippo lives to fight another day which I don’t think can be said for Ryuuhei who is shown to need immediate surgery due to his cracked skull, his sunken eye, a myriad of broken bones and all around muscle damage but that’s what happens when you go up against the boxing world’s greatest technique. The fight between Ippo and Ryuuhei is finally over and the champion has come out the victor to no-ones surprise but that’s how these Shonen-type series’ go. I’m very much looking forward to the coming storylines which should revolve around Takamura and his coming fights so keep an eye out for that arc! 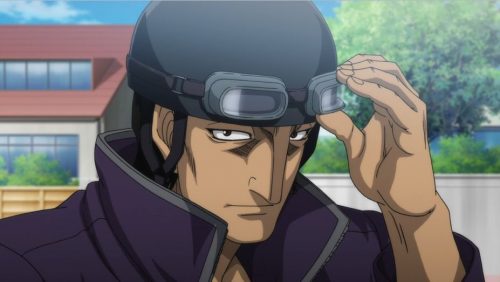