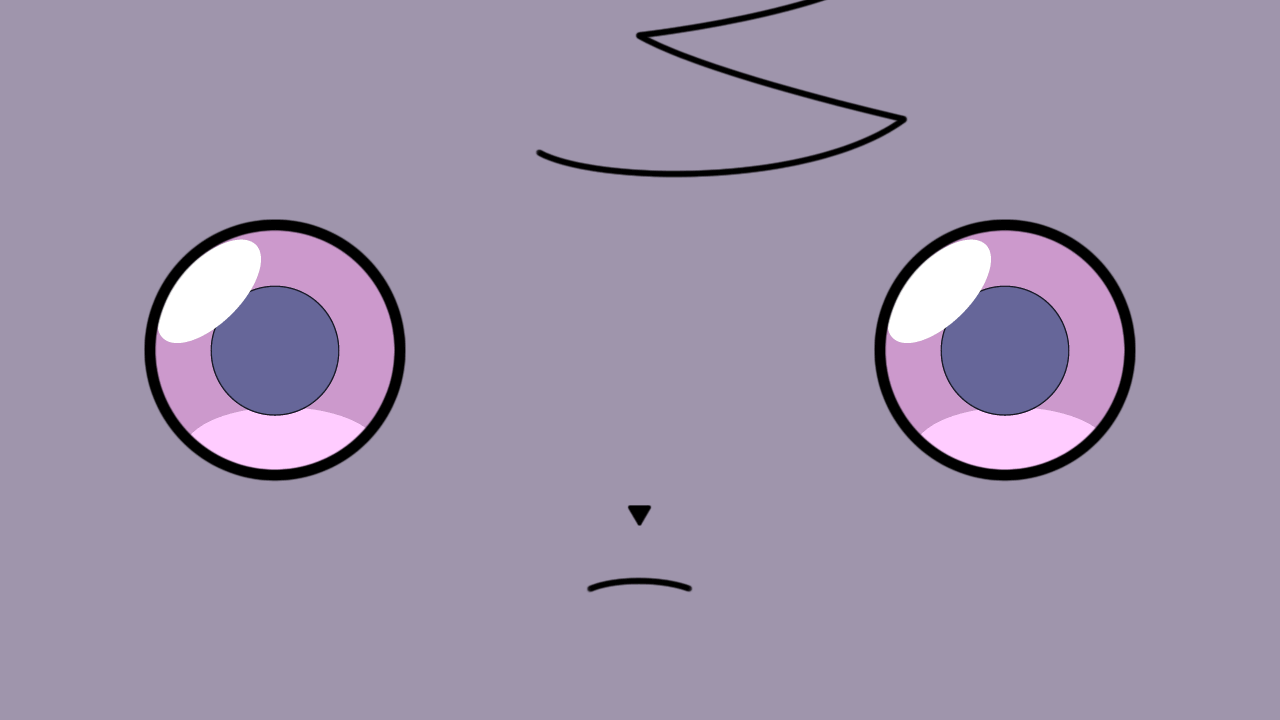 One of the strangest Pokemon, Espurr. That stare… Credit to OshiHidra

The Pokemon world is a strange and wonderful place where gamers have spent many, many, many hours within. The expansive regions have been a place where trainers bond with their Pokemon; battling, breeding, trading, exploring, catching and much more. While Pokemon games are generally well designed and are probably not meant to be picked apart like we are about to, there are definitely some strange on goings in the Pokemon world that just don’t make much sense, even in thier own universe. This is a list of the 40 strangest things I have personally noticed within the main Pokemon games myself and from other sources I came across on the Internet.

1) Some towns have only 3 houses and a population of less than 10.

2) Diglett can learn sucker punch despite having no arms.

3) Doduo can learn Fly despite not being able to actually fly.

4) Bird Pokemon have to be taught the move Fly, dispite flying in the air during battle.

5) A tiny Pidgey weighing in at 4 pounds can support the weight of its trainer and fly across an entire region. 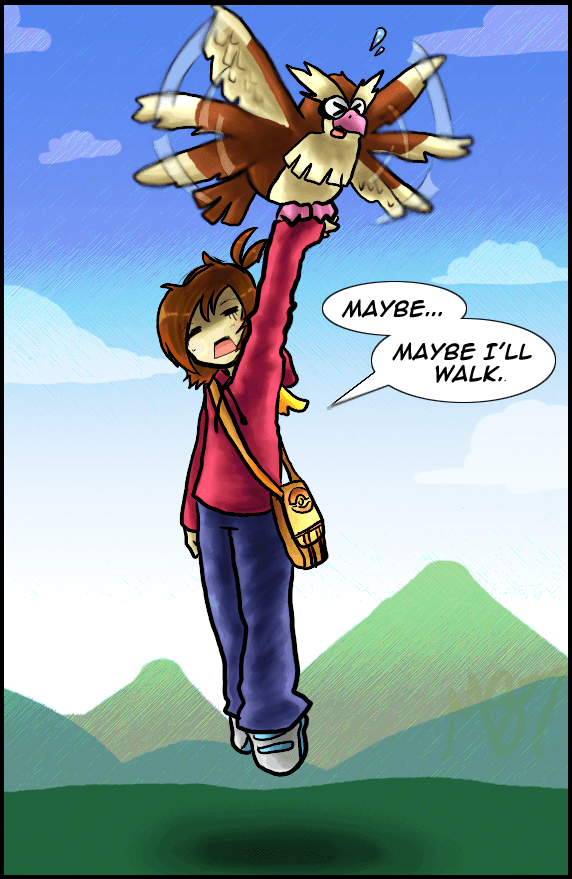 Pidgey will get you places… Credit morganchan for the image

6) Likewise, water pokemon have to be taught to surf before they can be used to swim on, despite some pokemon only living in water.

7) Higher level pokemon are only found in certain areas. I wouldn’t want to be a trainer starting out in Anistar City.

8) Some Pokemon that probably shouldn’t be able to be a certain gender but are, for example, male Gardevoir and female Mr.Mime.

9) Wailord and Skitty can mate in daycare. Yeah just think about that for a minute!

10) How does a Pokemon learn a move from a TM when the TM is just some wierd CD?

11) Adults fight young kids and take money from them if they win.

12) Pokemon can scale waterfalls and mountains but not small ledges, nor can people jump over them.

13) You have your own upstairs room in the house, but your mum doesn’t so where does she sleep ? 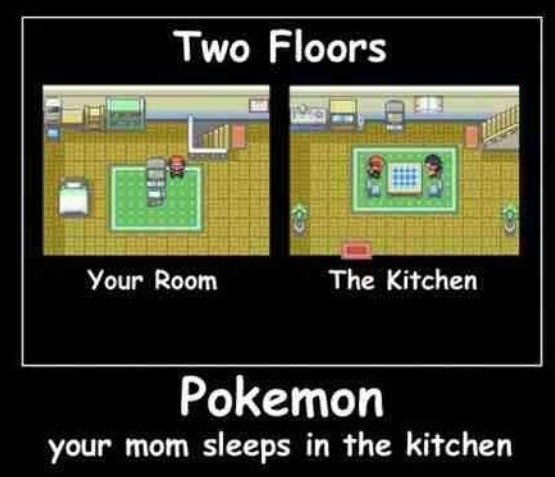 Your mother sure is nice to let you have the only bedroom.

14) Gym leaders spend 24/7 at their Gym…except for when you get to their town and it’s important to the story.

15) How come no one else has picked up the TM’s lying on the ground before you, or any of the other rare and valuable items for that matter.

16) You can beat the Champion 100 times and never become the champ yourself.

17) If Spoink stops bouncing, it’s heart stops meaning it will die, however you see it not bouncing during it’s faint animation…

18) Nidorina and Nidoqueen can’t breed but female Nidoran (F) can.

19) A criminal group will fight a single child one at a time, give said child their money when they lose and will completely give up after being defeated by said child.

20) Locking eyes means you must battle, even if your down to one Pokemon with no HP left. Seems fair.

21) A giant Tropius will hatch out of a tiny Pokemon egg…fully grown.

22) A small shrub can completely block your way even though you probably have Pokemon with moves that would destroy a building. Why can’t I just use Scratch, Slash or Ember! 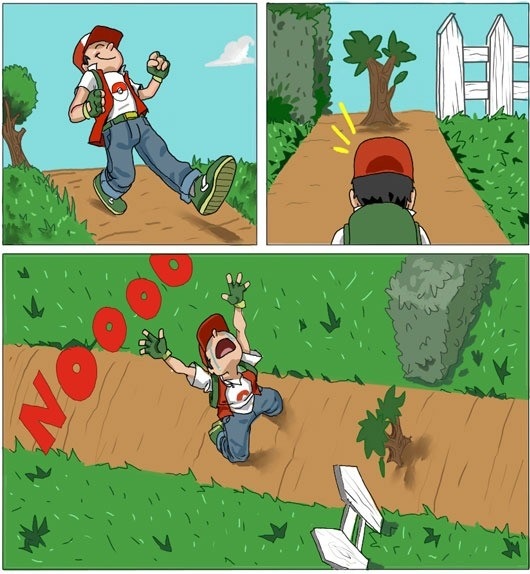 All fear the shrub… Credit to RNZZZ

23) A kid that starts out with no experience can somehow surpass people who have been training their Pokemon for years, after only a few days into their adventure.

24) You can catch Pokemon that control time, space, dimensions and even catch Gods. They will abandon the purpose they were created for to sit in your PC.

25) Goodra’s Pokedex entry states it attacks with retractable horns. It throws a punch that’s the equivalent of the force of a hundred pro boxers. However it’s base attack power is only 100. Does that mean a highly tranined boxer only has a base attack power of 1 ?

26) Strangers you just met will happily give you their phone numbers to give you the opportunity to defeat them again.

27) The Pokedex entries describe some Pokemon as references to real world animals such as dogs, horses and Indian Elephants. However there are no animals in the Pokemon world.

28) Regular water can cure 50HP while a potion made specifically to cure pokemon only cures 20HP.

29) You need specific running shoes before you can run…

What a great Professor. Credit to vgcatz for the comic.

31) A Professor of Pokemon sends a complete rookie to gather data on all the Pokemon for him.

32) A number of Pokedex entries make note of bringing harm to children or having joy at childrens despair. For example, Drowzee enjoys eating the dreams of childrens beacause they are tastier than adults while Duskull gets enjoyment from watching children cry. Driftloon even makes children vanish if they grab onto it thinking it’s a balloon!

33) The protagonist’s father never seems to be represented in the games. Maybe there’s a high divorce rate in the pokemon regions ?

34) Your small backpack can fit a near unlimited number of items along with a bunch of very rare items and a bike.

37) You can’t rename your Pokemon after you first catch them without the help of the Name Rater.

38) Trainers are happy to give you double money just because you have an Amulet Coin with you.

39) Why can’t we just walk around the Snorlax! And why do I have to wake it up to capture it!? I’m only going to use sleep powder on it anyway! 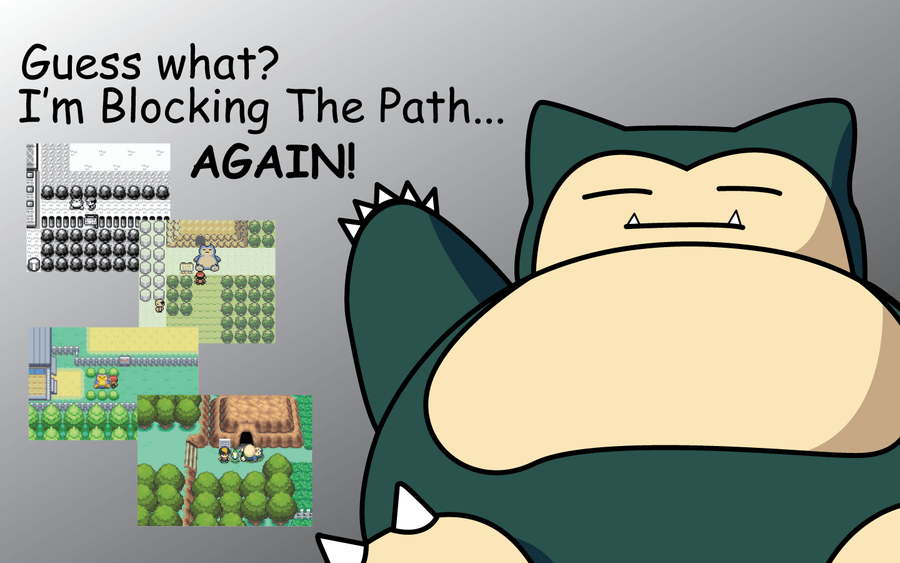 Snorlax always blocking your path. Credit to Shadow306k for the picture.

40) Wailord is actually three times less dense than air when you calculate its size and weight. This means it would actually float which is probably why it’s called the float whale Pokemon.

Got an oddity you didn’t see on this list ? Leave a comment below and let us know what it is or let us know what you think of the list we have compiled. Poke bank releases over the holidays so be sure to fire up your Nintendo 3DS and old Pokemon games and bring all your old pokemon into your Pokemon X and Pokemon Y games and to download the special Celebi that comes with the download. 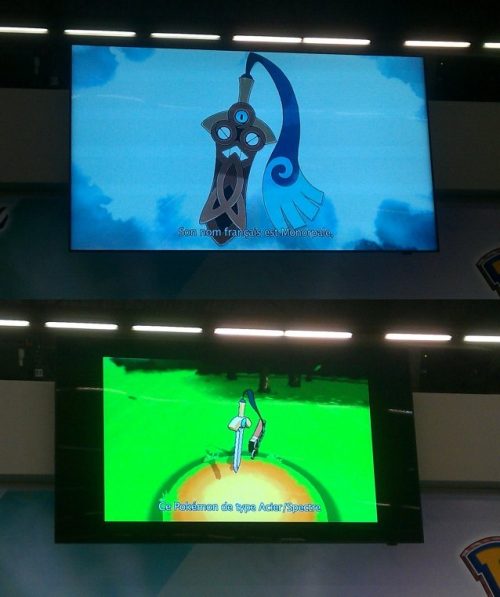