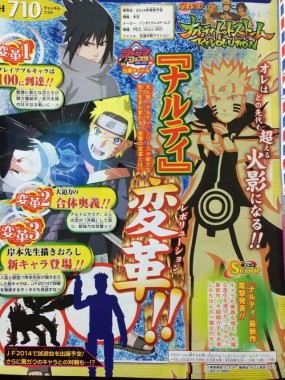 Naruto games are released frequently, we’re guaranteed at least one game per year and sometimes we’re surprised with a second title entirely or a second release of an already existing title, case in point; Naruto Shippuden: Ultimate Ninja Storm 3 Full Burst, well Namco Bandai are keeping the Naruto gaming spark alive by announcing the very next title in the line of fighting games. It was through Shonen Jump that the world was given information on the next Naruto game which is to be called “Naruto Shippuden: Ultimate Ninja Storm Revolution” and is actually set for a 2014 release, by the time the game is released the Naruto Manga may have finally come to a close and we may be seeing almost all the characters in one game for the first time. It is said to include 100 playable character including some brand-new additions to the roster who have been drawn by series creator Masashi Kishimoto himself. Right now that’s all the information we have but we should be getting more next month through the Jump Festa so keep your eyes on the site for any and all new info to be released.