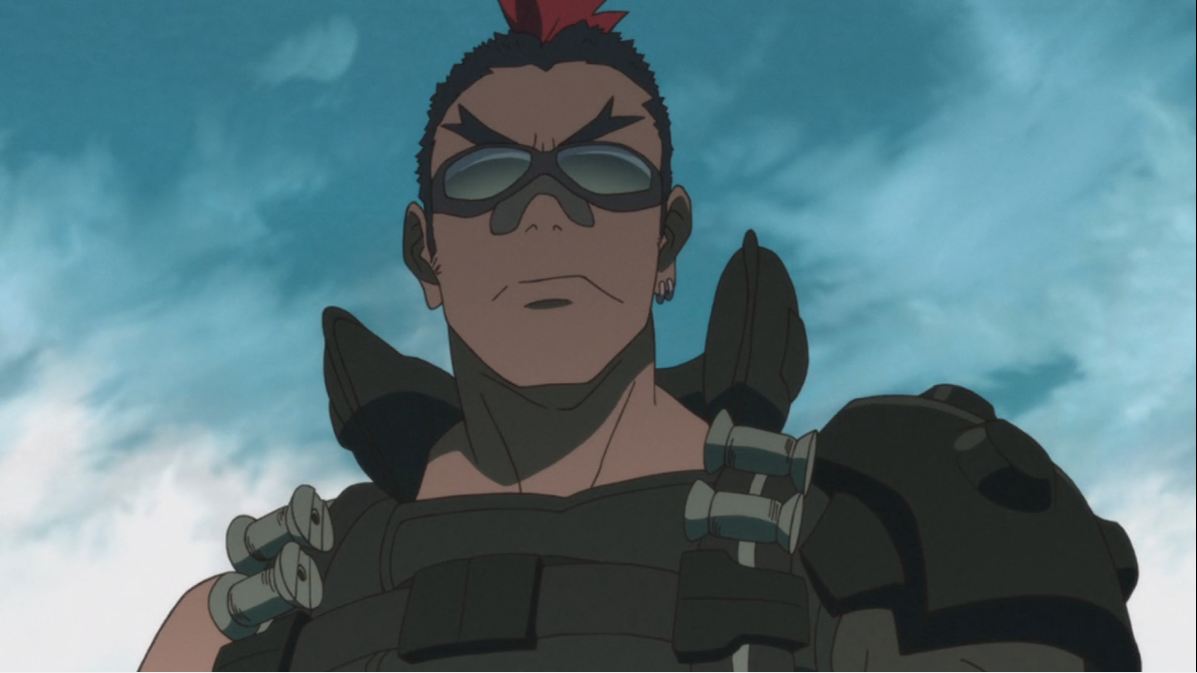 So last week Kill la Kill took a bit of a plot divergence and showcased the ridiculous humour that comprises a majority of the series. However, this week we’re back in action as a new badass character joins the fray. Now when somebody dramatically drives down the road on a motorcycle you immediately know that they are cool. It’s one of the rules of anime or something. Arriving at Hannouji, this mysterious mohawked man pieces together his high powered sniper rifle and takes aim at…Ryuko?

He is soon interrupted by the Gardening Club and their Two Star leader, all of whom are slightly ticked off that he walked through their flower bed in his pursuit of a vantage point. Unleashing the fast growth power of the Two Star gardening uniform, a plethora of precocious piranha plants pursue the powerful perpetrator. Now, as we have learnt from previous episodes, it’s a bad idea to challenge any Star Uniform without one of your own…it usually doesn’t end well. But not everyone is as badass as Tsumugu Kinagase. Avoiding the horticulturalist from hell, Kinagase unleashes a barrage of nails which have a power draining effect on uniforms, which is a very handy ability to have in Hannouji. Long story short, the Garden Club takes a dirt nap and Kinagase nets himself a new Life Fibre. 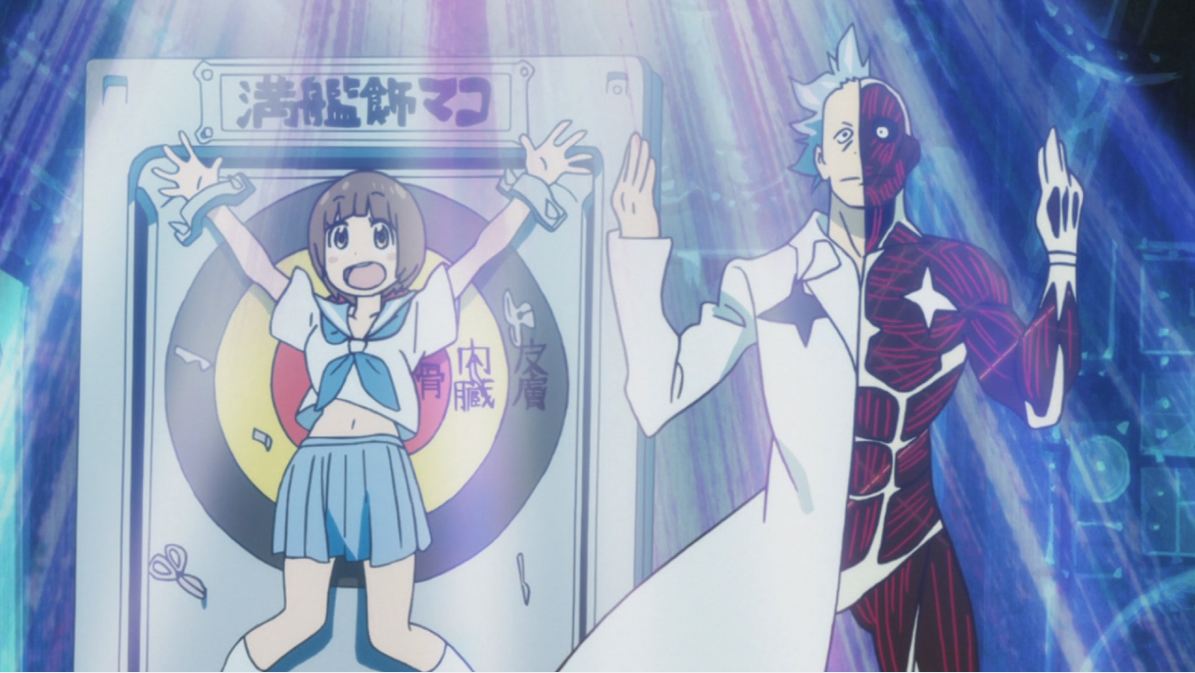 We now return to our regularly scheduled protagonist…

It appears that once again Mako has been kidnapped by an evil school club and is being used as bait to lure Ryuko into a trap. It doesn’t work, but the bad guys certainly are persistent…or stupid, get those two confused sometimes. With clubs constantly on the offensive, Ryuko has grown stronger and, unfortunately, a little overconfident in her abilities. But with new skills, like being able to shrink the Scissor Blade down to regular scissor size, who can blame her. In the middle of a lunch celebrating their victory, Mako is peppered with needles and taken out of action. Don’t worry though, when she wakes up any fatigue she had will be alleviated, any sickness cured and she will be full of vim and vigour. Anyway, mohawk takes this time to attack Ryuko and politely, but forcefully, asks her to remove her clothes. Just as he is about to take Senketsu, Kinagase is interrupted by a note tied to a pin…thrown into his hand. Promising to return, Ryuko barely escapes danger.

After revealing that it was Mikisugi who threw the note, we finally get to learn some more about his motives. Apparently he is a part of a larger organisation known as Nudist Beach who desire a world where clothes do not hold the power to augment people. We also learn from Kinagase that there is a danger of being consumed when donning a Kamui, transforming into a “monster” in the process. 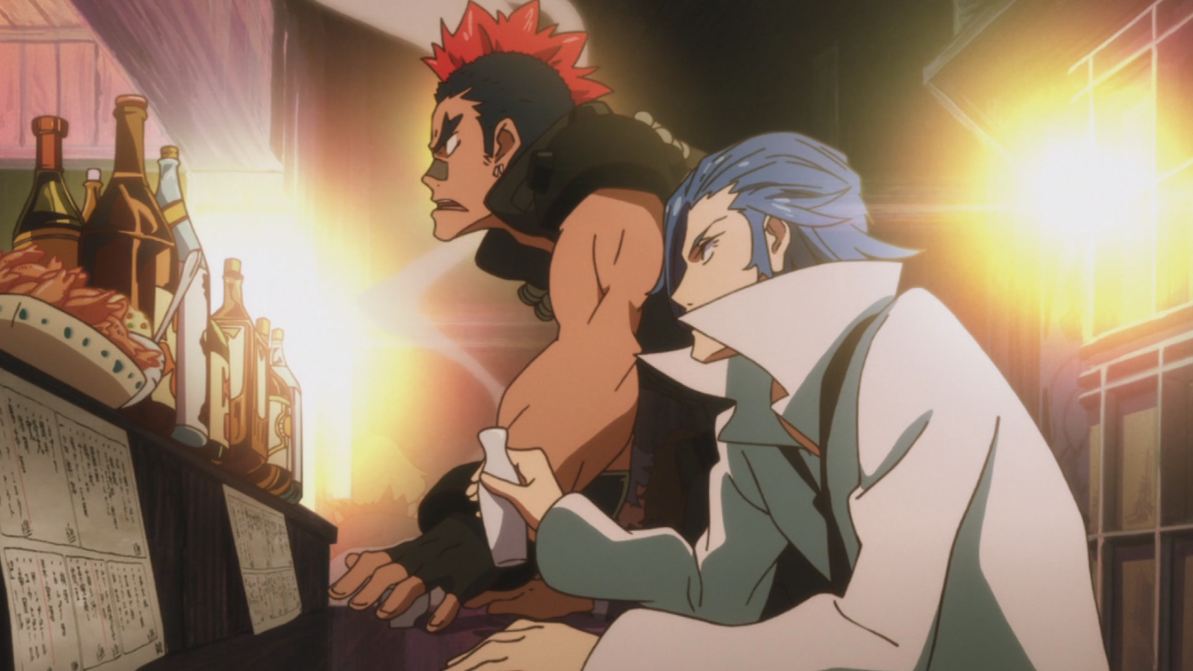 Things are tense in Nudist Beach

Despite Mikisugi’s intervention, Ryuko and Kinagase wind up fighting the next day. After a little back and forth, their battle is interrupted by every non-athletic club as per Satsuki’s orders and co-ordinated by Nonon Jakuzure, whom we learn has been with the president the longest of any Elite. As the fighting spreads and escalates, Ryuko finds herself in the school building, battered, bruised and with a depowered Senketsu. Kinagase takes this opportunity to literally swing in and kick her into the bathroom wall. He explains to her that there was once a woman who claimed clothes as comrades, but she was betrayed and destroyed by them. Failing to convince Ryuko to back down, Senketsu detaches himself from her and prepares to sacrifice himself to help Ryuko escape. With Mako’s intervention and a threat/promise from Senketsu, Kinagase begins to understand that clothes aren’t inherently evil, deciding to give Ryuko one chance to prove herself. Though he promises to finish the job he started should things come apart at the seams.

The events that transpire in the bathroom are probably the most intense that have happened in the series to date. The fact that Senketsu was willing to be destroyed to save Ryuko shows how close the two have become in such a short time. When Senketsu is taken down, Ryuko appears visibly broken for the first time, being affectected by it more than any of the crazy events that have already happened. Though Mako appears once more in her timely fashion, her humourous rant also contains some pretty raw information. She notes how before Ryuko, the only friends she ever had were in her head which, whilst representing her quirky character, also lends to the terrible effect of Satsuki’s rule on the populace and their segregated lifestyle. It should also be noted that this is the first time in the series where nudity isn’t played for laughs or fanservice. When Ryuko is stripped of Senketsu, there’s no humour to it, instead it represents her vulnerability and loneliness without her friend. Amidst all of her bravado and badassery, this side of her personality hasn’t really been given any attention, so it’s quite the shift to see our hero in such a state. The dynamic between Ryuko and Senketsu definitely adds a depth to their characters and shows a rare sombre side not often seen in this ballistic series. 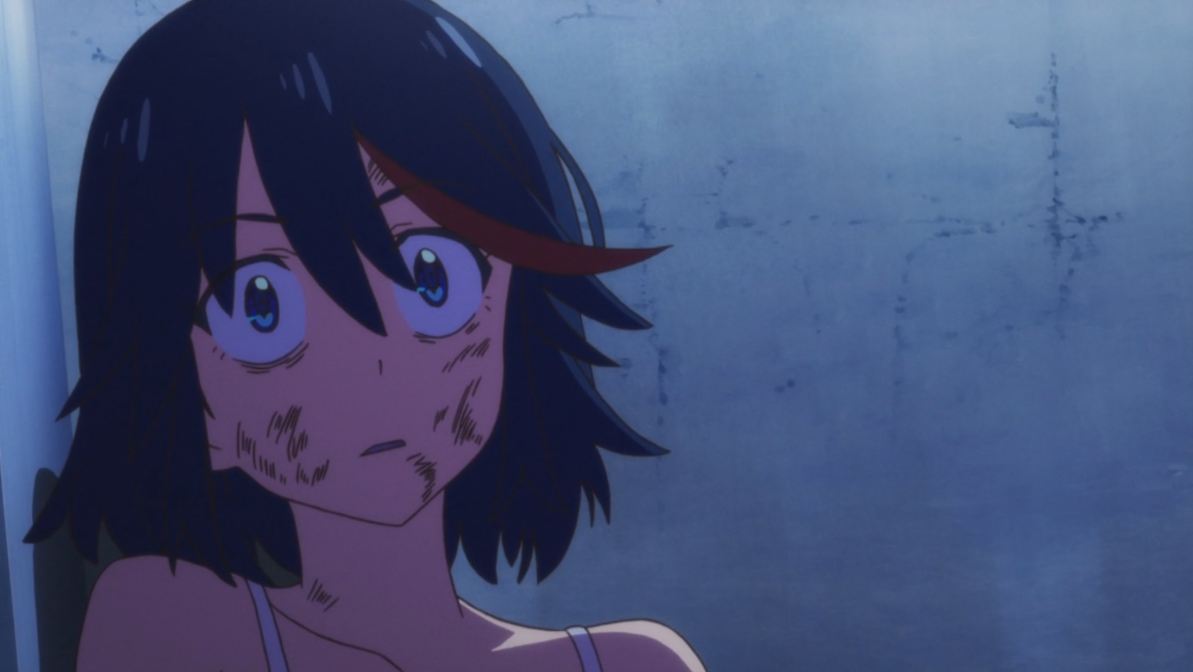 A side of Ryuko not often seen

As opposed to the previous episode’s off the walls humour and insanity, Epsiode 5 delves into the much more serious side of Kill la Kill. The development and exploration of relationships shows how there is some depth to the series beyond the awesome fight scenes. Even Satsuki is revealed to have a “softer” side, offering thanks to Jakuzure for understanding her true intentions and acting accordingly. I guess even evil can have friends. That’s kinda nice…right?