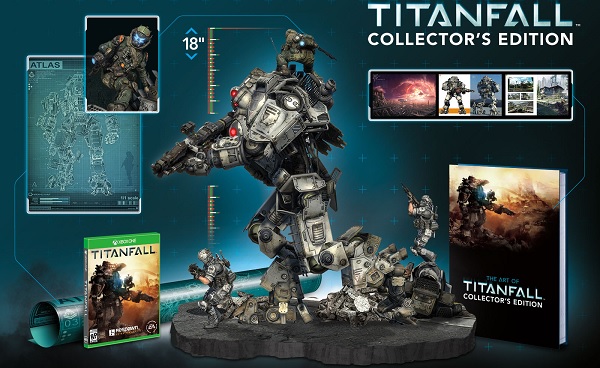 If you’re looking forward to Titanfall then we have some good news for you. If you’re looking forward to the game and also have A LOT of money to burn then we have some even better news for you. Today Respawn Entertainment and EA have revealed that Titanfall will be released on the Xbox One, Xbox 360 and PC on March 11, 2014 in North America and March 13th in Europe.

To top that off, there will be a basic version of the game as well as a $249.99 collector’s edition pictured above. This version includes the game, an exclusive 18″ hand-crafted titan statue with diorama and battery powered LED lighting, a full size art book with more than 190 pages of concept art and a full size schematic poster of the Atlas titan. To go along with this announcement the company also released some brand new gameplay footage which you can check out below. Of course for those looking for some hands-on impressions of the game you can find that here.