The Mario Kart franchise is one of the best selling video game series of all time, with over 80 million copies sold over its long tenure. People are addicted to the family-friendly kart racer, and it is due in no small part to its consistent, yet always evolving formula. Mario Kart has always taken the extra step with each new installment, never being satisfied with resting on its laurels. With that in mind, I stepped up to the podium at this year’s EB Games Expo, and sped Mario down a racetrack to find out if the upcoming Mario Kart 8  for Wii U is worth the wait.

The first thing I noticed about the game was its absolutely stunning visuals. This is the series’ first foray into HD graphics, and the guys over at Nintendo have pulled out all the stops. The backdrops are well done, the character models are fantastic, the textures make the surrounding areas pop to life, and the particle effects (like the sparks and flames that trigger when you drift around a corner) are all expertly animated, and combine together to make a really beautiful looking experience. The trailers and footage shown for the game really don’t do it justice, and it isn’t until you are looking at it and playing it that you can see so much life and vibrancy just exploding off the screen. 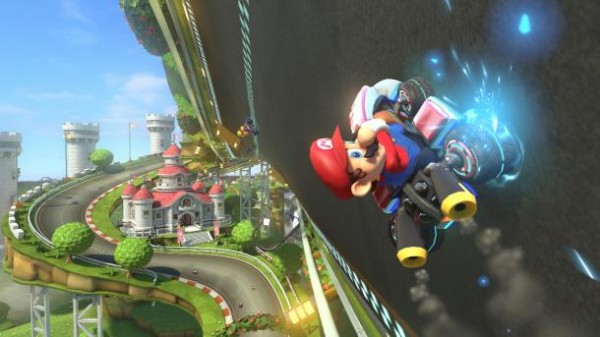 The game itself plays exactly how you would expect, and anyone who has ever played a Mario Kart game will immediately know the controls, and they will feel like second nature. I got to try out both the motion-control (implemented in Mario Kart Wii) and the more traditional joystick controls, and while the motion-control took some getting used to it was still fun and felt very fluid and responsive. However you can’t go past the joystick and button controls, which were incredibly responsive and fluid.

Thinking back to the original Super Mario Kart on the SNES, to where the series is at now with Mario Kart 8, it is amazing to see how the improvements and developments from the previous installments all (usually) end up as series’ mainstays. In the short track that I managed to race on, I got to speed by Donkey Kong (introduced in Mario Kart 64) riding a motorcycle (Mario Kart Wii), before I jumped off a ramp (Super Mario Kart) and having my kart grow a hang-glider (Mario Kart 7). Everything feels like Mario Kart should feel, and retains the best parts of the series to make an experience that is nostalgic, while still feeling fresh. 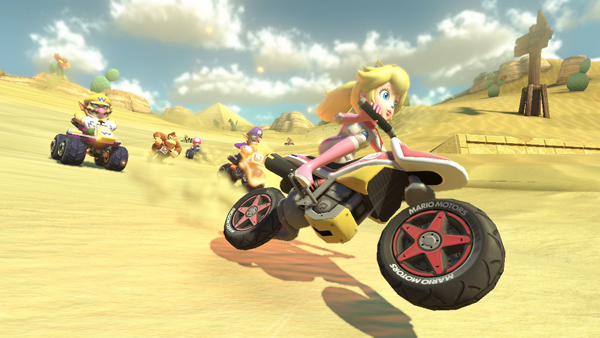 Part of feeling fresh is the new addition to the series, in its anti-gravity sections. The race tracks now twist, turn and even go upside down. As you enter a part of the track that is going upside down, your kart’s wheels will flip around and turn you into a sort of hover craft. Initially it didn’t seem like this was changing the gameplay formula too much, but my impression soon changed when I was hit. In normal situations, ramming your opponent’s car would cause them to lose speed and control, however when you are in one of these anti-gravity sections, the exact opposite is true. When colliding with someone, both racers will get a temporary speed boost (about equivalent to triggering the mushroom item) which can vastly differ your racing strategies. It will be interesting to see how other race tracks employ this feature, and how it will impact on the game as a whole.

I know what you all want to hear about; the weapons. Sadly in the small demo I played, there were no new items to take advantage of. As this is a simple demo, many players were blasting ahead of the competition and as such were only getting access to bananas and green or red shells. This is a staple of Mario Kart games since the beginning, where the worse off you are doing results in better available weapons. All Mario Kart games add or remove certain items from their repertoire, so it will be exciting to see what the final item list ends up like when the game finally launches. 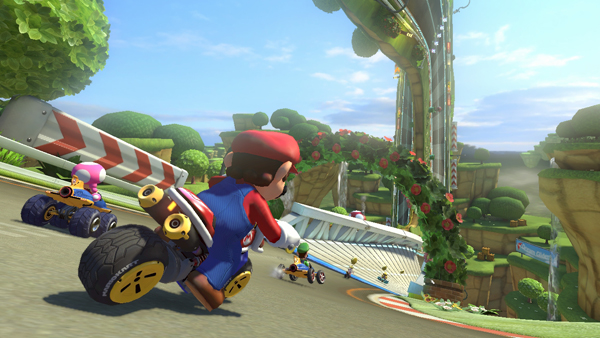 Mario Kart 8 is definitely a by-the-book Mario Kart game, but this is definitely to its benefit. Taking 11 years of history and development and packaging them together with a couple new features, and a beautiful visual style makes for a game that I am definitely excited to play more of when it launches next year. So for all the Mario Kart news as it becomes available, stay tuned to Capsule Computers