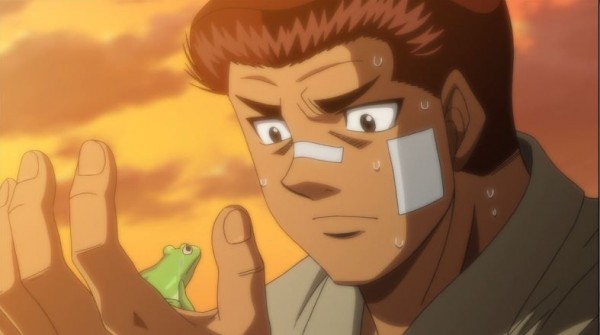 Hajime No Ippo – Rising
Episode 4 – The Goddess Of Victory

This episode starts off literally exactly where it left off in Episode 3 (click here to see Episode 3 Impressions) with Aoki being stark-naked right after weighing in for the match as his challenger Imae walks into the room to see his full-frontal nudity. It contrasts the two fighters and also does a good job at both lightening the mood and causing the kind of tension you could cut through with a knife. Hajime No Ippo knows how to blend humour with aggressiveness and it does it well.  The episode takes us through the final stages of setup before the big match for these two challengers and it also serves as a show of a divide between the two combatants, more-so than it did in the last episode. 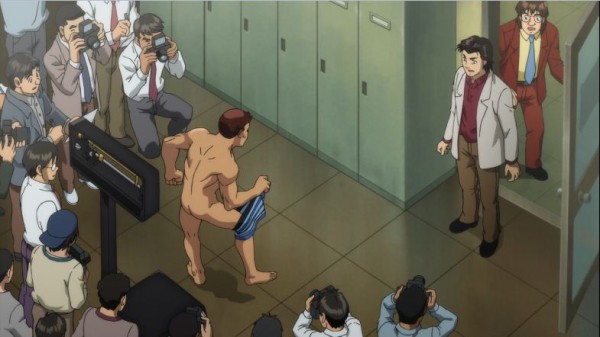 The episode title “The Goddess Of Victory” was not named as such by accident, this episode shows us the lack of connection between Imae and his former-lover and the deep link between Aoki and his girlfriend, it also shows as what the two fighters believes to be the correct way to go about love and boxing; Aoki confides in his girlfriend, he looks to her for comfort and stability whereas Imae seperates himself entirely from his girlfriend so that he can focus solely on the fight.  This episode, if you can’t already tell, is all about comparisons and works as a fantastic setup for a match where the audience can honestly not see the true outcome. Usually a fight within Hajime No Ippo can be forseen, the audience knows who will win and almost how they will do it but considering Aoki is not a title holder nor has he ever had a huge match like this, it can essentially go either way. 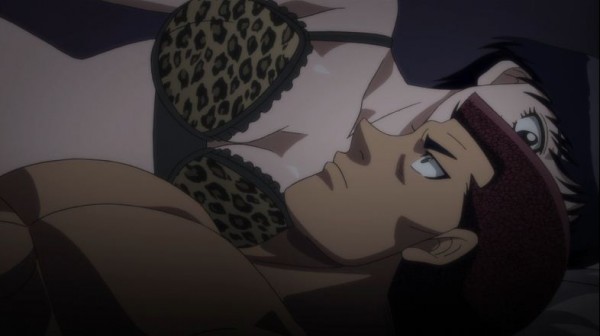 It’s also stated that he learned a lot of what he knows through loses so this could just be another loss…possibly. Imae spends the night before the match alone, studying all of Aoki’s previous matches while Aoki himself spends the night locked in carnal embrace with his sweetheart which, apparently, is NOT a good move before a big boxing match. Aoki brings Tomiko (his girlfriend) along to the fight and, once again, it proves to just be an addition of fuel to fire for Imae who sees the couple together before the match begins. Imae seems to be full of hate and resentment and Imae seems to want to be rid of those emotions, it’s tough for both fighters but you tend to feel for Imae. The episode also briefly focuses on the Gym’s rookie member Itagaki Manabu who wins his rookie fight just before Aoki and Imae are set to enter the ring for theirs. 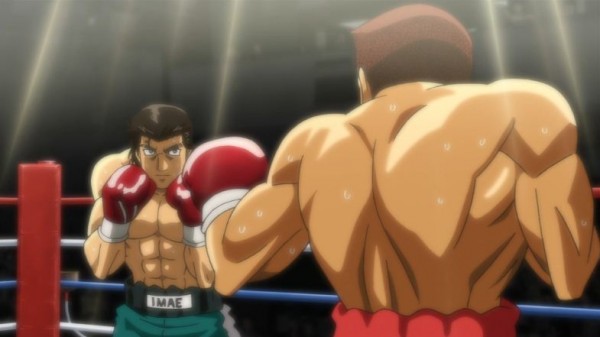 The little addition was nice because you constantly see Itagaki training and you’ve never really seen him in the ring, I know for sure that he didn’t get too much spotlight last season so it’s just nice to see him in full view AND winning. The match is about to begin, Aoki begins preparations, he wears his “Victory Frog” jacket and hits the ring ready to take home the victory. Both combatants enter the stage with Aoki being a fan-favourite but it seems like the crowd only wants to see his patented “Frog Punch”, he doesn’t let their screams sway him though, rushing in will only force him into a loss. Imae stands at guard in the middle of the ring, barely moving a muscle as Aoki is bouncing and rolling just waiting for the right moment to strike but it doesn’t seem like he can see it. It’s the set up for an interesting fight and, like every week, I’m excited for this next episode. Check out more Hajime No Ippo – Rising Impressions HERE. 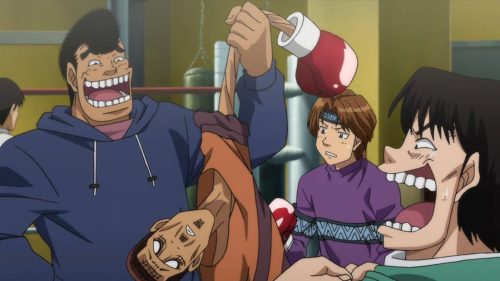