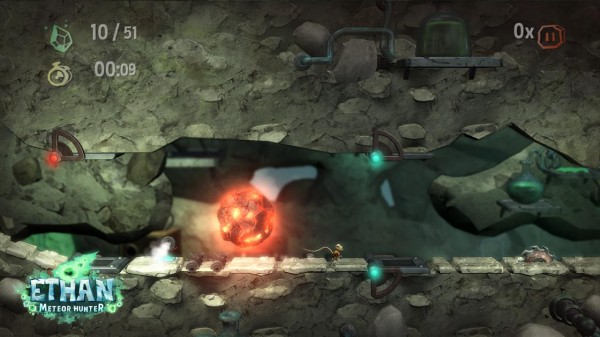 Seaven Studio may have missed their original summer release date, but the team is hard at work to ensure an October release. They are so comfortable with the October release date that they announced the start of Windows PC pre-orders for Ethan: Meteor Hunter. Pre-orders come in four tiers, the $9.90 Classic Edition that contains a digital copy of the game for Linux, Mac, and Windows; the $14.90 Deluxe Edition that contains the game, soundtrack, an art book, and game guide; the $19.90 Early Adopter Edition that will give buyers the Deluxe Edition five days before the official release, and the $29.90 Supporter edition that will put the buyer’s name in the credits and the Early Adopter Edition. Pre-orders can be purchased from the official Ethan: Meteor Hunter website.

The PlayStation 3 edition will also cost $/€9.90 on PlayStation Network. To celebrate the big news, Seaven Studios has posted a lengthy new trailer that shows off the Time Attack mode. Find out more about Ethan: Meteor Hunter in our preview.

PSN downtime today as a result of maintenance