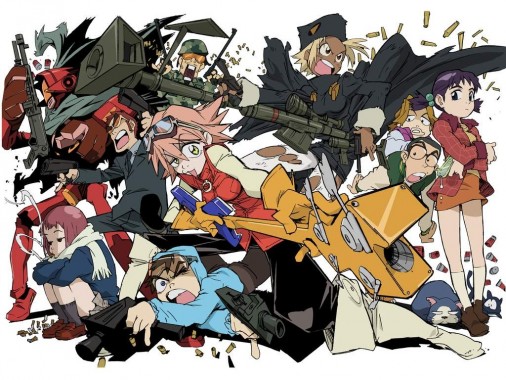 We’ve just heard that the short yet incredibly epic Anime series FLCL (Fooly Cooly) will be returning to Cartoon Network’s Toonami in October! FLCL will be taking IGPX’s place, time spot and all, after the racing Anime’s finale on October the 19th, there will be a double episode that night. Cowboy Bebop will also be heading off Toonami for a little while and Ghost In The Shell: Stand Alone Complex will be having a break after the 19th of October. As of right now we don’t know exactly what is going to replace these shows, we just know that FLCL is back in and hopefully that will bump up the ratings because, apparently, they haven’t been doing well lately.

Last week on Toonami not one show hit over a million views. This may or may not be the reason for the list change, it could also just be a scheduled change to mix things up. Toonami also did a Q & A today, which was hosted by Tumblr, in which they mentioned that a hug announcement will be coming “some time in the next 30-60 days”. Who knows what that will be at this point in time, I guess we’ll just have to wait and find out.

Toonami begins again on May 26