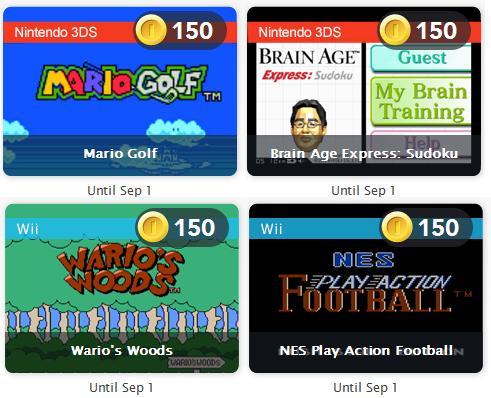 To be absolutely honest, I have been a slight bit disappointed with the offerings Nintendo have delivered for Club Nintendo in recent months. Sure, we have received Super Mario RPG, Paper Mario, Super Metroid – and so on, but how many of us bought those games when they first hit the Virtual Console? Nintendo seem to push the popular- which is a smart move, but I prefer the little games I missed out on to show up, as nothing beats a free game that the player has yet to experience.

This month, that is the name of the game as four lesser-tier rewards have shown up, offering titles that may be known, but owned by less of the base that own a Wii or 3DS. For the 3DS, we have Brain Ages Express: Sudoku and Mario Golf up for grabs, and NES Play Action Football (which has shown up before) and Wario’s Woods for the Wii’s service – all for 150 coins each. Sure, they don’t scream to me like Mario or Kirby, but I am digging seeing titles I have yet to add to my collection – even though I know I am alone with that sentiment. Either way, you can download all four of these titles by trading in your gold by September 1st and get that eShop filled up with some gems.