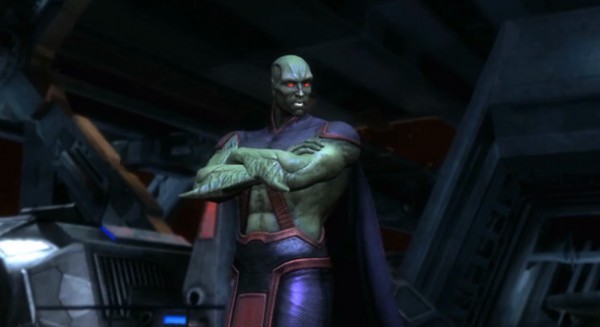 Fans clamoured for it; they bombarded NetherRealm and Ed Boon’s Twitter, took to the forums and boards, overwhelmed polls, and now they can cease, for their quest to get Martian Manhunter playable in Injustice: Gods Among Us is complete. Ed Boon made the announcement during EVO 2013 this past weekend, also revealing a gameplay trailer of the green Martian in action.

That trailer can be viewed embedded at the bottom of this article. J’onn J’onzz finally makes the transition from a background element in the Watchtower arena to fully playable fighter (literally…choose him on that level, and he will disappear from the background). Those who watch the video will also notice a new Green Lantern skin – that of architect John Stewart. Coming with a new voice-over, the skin’s inclusion does not mean, however, that we will be seeing all new construct abilities relating to his very different background to Hal Jordan. Sigh…I bet that’ll turn into another reason for people to complain…

So rejoice fans! A great game is still getting better. A release date has not been confirmed as of yet, but stay tuned within the coming days and we’re sure we’ll have more to share as we update this article.