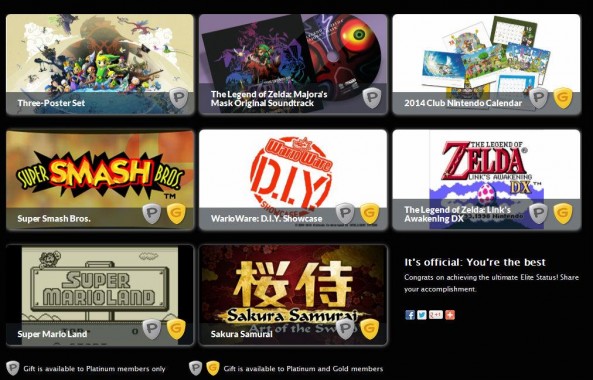 We have been curious as to what type of swag Nintendo would drop on us with Club Nintendo Rewards’ coveted prizes, and today, the wait is finally over. Those who achieved platinum status will be able to redeem a nice soundtrack for The Legend of Zelda: Majora’s Mask, which comes in a jewel case, or a poster set featuring stunning prints of Pikmin 3, The Year of Luigi, and Wind Waker HD.

Gold members (or platinum if they so choose) can redeem a Nintendo 2014 Calender, Virtual Console titles such as Super Smash Bros. (Wii), Super Mario Land (3DS), The Legend of Zelda: Link’s Awakening (3DS), or two eShop titles – WarioWare D.I.Y. Showcase and Sakura Samurai. That is a lot of things to choose from, and to those frowning due to the lack of a hat or statue, be happy in knowing that this reward service has tripled in size, and Nintendo will still be bringing out more digital freebies during the coming year that you can spend your coins on. Right now, these coin-free options are live, so grab them now while they’re hot!