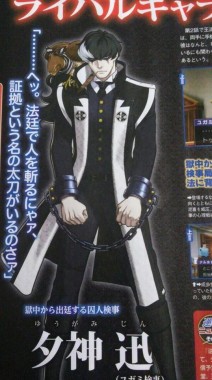 The next game in the Ace Attorney series has received a preview trailer showcasing the characters transition from traditional 2D style, into the 3D graphics of the 3DS. The trailer shows Phoenix Wright, once again the protagonist, along with his new assistant Kokone Kizuki, a rookie defence attorney and psychologist, involved in a case regarding an explosion at the courthouse. Apollo Justice is also set to return as a playable character.

The end of the trailer also hints at a new character, revealed by Famitsu to be Jin Yugami. Having been accused of murder, Jin is nominated to serve out his sentence as prosecutor. The image shown depicts him as saying “Heh, in order to cut someone in court, you need a sword called evidence!”

Ace Attorney 5 will be available in Japan July 25th, with plans for Capcom to bring it to the west at an, as of yet, unspecified date.