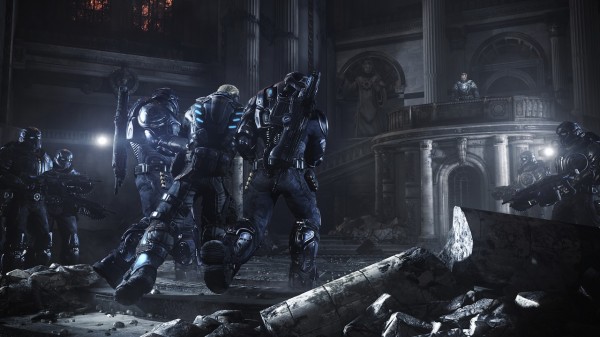 Thanks to Xbox Australia and EB Games, I recently got some hands-on time with Gears of War: Judgment’s campaign. Epic Games lead level designer Jim Brown also graced us with his presence, and an interview which you can read right here.

To preface this preview, I must say that I did not get too much time with the game as there were only 5 game stations and more than 20 guests so we all gave up the controller after a short while to be courteous and allow everyone a fair chance to play part of the 1.5hr long chunk of gameplay (but I did observe A LOT and make many notes).

So, this time around you will be playing apparent fan favourite Lt. Damon S. Baird. Along with Pvt. Augustus Cole (COOOOLE TRAAAAIIIN!), Kilo Squad has some familiar faces. Joining them are trainee of the Onyx Guard Academy, Sofia Hendrik, and COG soldier Garron Paduk. The story starts off as Baird and the team are being tried for war crimes by Col. Ezra Loomis. Players will then get to experience Kilo Squad’s actions brought forth as testimony in the trial as a series of flashbacks. This is the story structure for a sizeable portion of the game. 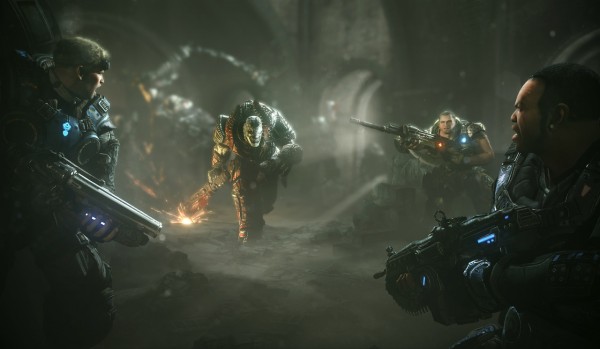 The majority of this opening section takes place in and around the ‘Museum of Military Glory’ in Halvo Bay; one of the first big cities to get attacked on Emergence Day. Kilo Squad jump straight into the action, defending the city from Locust swarms. I am not a fan of detailing plot points, so I will just get into the mechanics and gameplay. Judgment makes some key tweaks and changes to the control scheme that, if you’re like me, may catch you off guard at first. Firstly, gone is the use of the D-Pad to select your weapon. That functionality has now been assigned to the ‘Y’ button (Up on the D-Pad now zooms in on a point of interest and Down on the D-Pad brings up your mission objective).

It’s a move that mirrors many FPS’ out there, but has good reason to. In Judgment, the “Smart Spawn System” means that enemy types and enemy spawn locations are randomly generated, sort of like how ‘The Director’ worked in the Left 4 Dead series. Coupled with the fact that the sheer number of threats on screen has increased, you may find yourself surrounded or overwhelmed and streamlining the weapon swapping – which is also quicker animations-wise – ensures you aren’t caught off guard while an animation cycles or distracted by an unnecessary interface element in the heat of intense battle. Those moments are critical.

Also, grenades are now mapped to the ‘LB’ button and can be thrown without any wind-up, although that is still an option for when you have the spare time to aim. Many weapons were featured in this demo, including the Boomshot Grenade Launcher, Mortar, Gnasher, Lancer, One-Shot, Scorcher Flamethrower, Breechshot, Mulcher and Boom Shield. The newly revealed Stim-Gas Grenade was also made available, which heals anyone who enters its radius of blue mist. I was surprised to see so much of an arsenal acquirable from the get-go, but with wave after wave of Locusts, I was glad to have access to them. 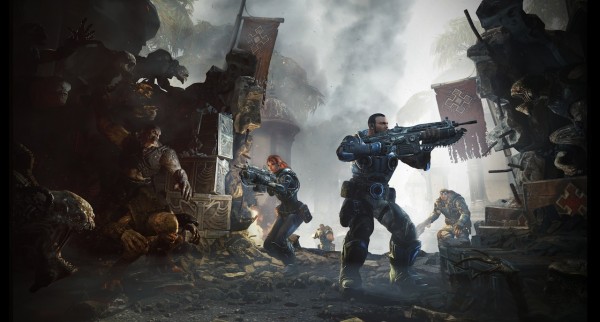 Speaking of Locusts, a litany of enemy types entered the battlefield throughout the play-through. Grenadiers, Tickers,Wretches, Kantus, Mulchers, Boomers and Butchers were all present. I found the A.I. of the average Locust Drone to be disappointedly simple, and even confused at times. I experienced them, first-hand, facing the complete opposite direction to me as I brushed by them, lost as to who to attack as a priority; me or my teammates. Nonetheless, the onslaught is brutal across the board and you will actually find yourself frantically on the move quite often, rarely able to stay behind a piece of cover for too long before being forced out.

Back to the weaponry, there are certain weapons that are utilised only in specific scenarios, such as the Sentinel – a placeable turret that adds significant firepower to your defences. The Hammer of Dawn even makes an appearance, although specifically during a Declassified Mission. These missions are a huge selling point for the campaign, along with the new star rating system. Every section of the game is bookended by a stats page of sorts that lists all your battle achievements, adding up to a star rating out of 3. It’s a system that encourages replay, which can be done immediately by pressing ‘Y’ instead of ‘A’ for continue on said page.

The aforementioned star rating system carries over to the Declassified Missions, which pose a series of challenges for the player to complete in the ensuing level or area. These conditions vary from restrictions on weaponry to time limits and more. Successfully completing these tasks and the missions themselves grant more points that fill up your star rating much faster. This, in turn, will unlock special items or weapons down the line. These missions are billed as the “off-the-record” recounts of Baird; the events that actually went down, although, it’s up to you if you want to tackle them – and if you don’t, then they never really happened did they!? 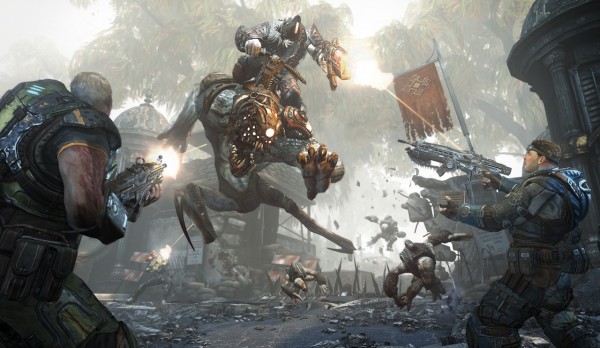 These alternate events take place in different routes and locations than you would normally experience outside of attempting them. The same ground is not being covered here; there is always something new to see or do in these missions, which hold even more value because of that fact. Again, replay-ability is clearly something the teams at Epic Games and People Can Fly wanted to instil. It also makes the game that much less linear, which is always welcome. So when you get your copy, I suggest accessing that massive red Gears omen plastered on a wall somewhere in your current level. Oh, and play on higher difficulty levels for more rewards!

All in all, Judgment looks like the original Gears of War in the sense that it is grittier, darker and much more muted than the later titles. The action comes on thick and heavy, more than ever before. To me, with the added elements of the Declassified Missions and the star rating system, I felt like the campaign took on an arcade style approach, and adopted particular multiplayer ideas/concepts as well – especially the Horde mode-like moment or two. It plays like you want it to; faster, more refined but also familiar. But this is definitely not just another Gears game. The team took risks here, and it’s refreshing to see.