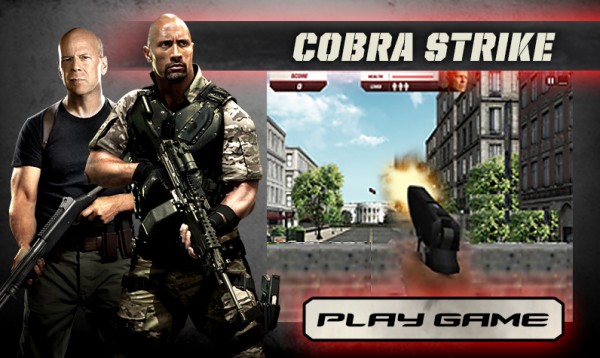 Paramount Pictures have launched a new, browser-based first-person shooter game called ‘G.I. Joe Retaliation 3D – Cobra Strike!’ For any fans of the franchise, the game gives you the opportunity to play as either Joe Colton (Bruce Willis) or Roadblock (Dwayne Johnson). It’s a very simple, basic game, but those high-score hunters out there may appreciate its old-school arcade appeal – all the way down to the music!

You can play the game right here. Recruit your friends and shoot well to upgrade your weapons and obliterate them in the high score chase. Visit and ‘like’ the official AU G.I. Joe Facebook page for all the latest updates on the upcoming film. We’ve included the official Australian G.I. Joe: Retaliation trailer below this article for those who haven’t seen it. And if you’re completely unfamiliar with the film, here is the official synopsis:

In this sequel, the G.I. Joes are not only fighting their mortal enemy Cobra; they are forced to contend with threats from within the government that jeopardize their very existence.  The film stars D.J. Cotrona, Byung-hun Lee, Adrianne Palicki, Ray Park, Jonathan Pryce, Ray Stevenson, Channing Tatum with Bruce Willis and Dwayne Johnson.  Directed by Jon M. Chu, and produced by Lorenzo di Bonaventura and Brian Goldner, from a screenplay by Rhett Reese & Paul Wernick based on Hasbro’s G.I. Joe characters.

G.I. Joe: Retaliation is in cinemas across Australia from March 28.