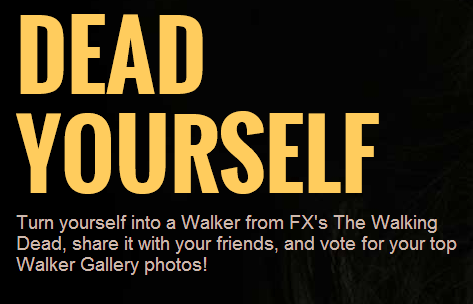 The acclaimed AMC television series of The Walking Dead has turned fans into zombies, with last months release of the ‘Dead Yourself’ app.

The new free iOS and Facebook app allows individuals to recreate their feverish-selves using the grotesque attributes of walkers and weaponry features in their photographs. A blood-splattered blemish, hollow eyes, dislocated jaw and arrow through the head is the perfect zombie-makeover to capture the attention of anyone’s liking. Who would have thought that the worst form of ourselves could serve as a promotion strategy for Telltale’s adventure horror game and Skybound Entertainment’s comic collection?

To distinguish the best walker profiles, fans are encouraged to upload their photos to the gallery on DeadYourself.com and rate the ones that appear the most horrifically realistic. Unsurprisingly, most of the highest-rated photos include young children and pets.

‘Dead Yourself’ app brings to question the extent to which the zombie-persuasion has driven us to change our appearance and the way we act in society. If the inevitability of a zombie apocalypse is the result of humanity changing.  Soon enough everyone will be walking dead.

Check out the Apple Store to pick up your app.