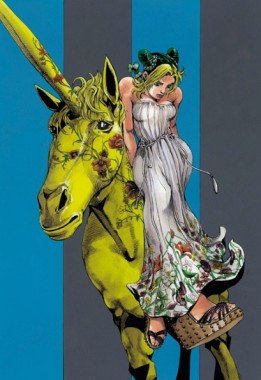 JoJo’s Bizarre Adventure creator Hirohiko Araki recently created a one-shot manga to celebrate the 90th anniversary of fashion giant Gucci. Araki further collaborated with Gucci on art installments for their Japanese stores as well as the focus of the Tokyo Shinjuku Gucci Exhibition.

Araki’s art which features JoJo characters dressed in Gucci designs will be debuted at Gucci’s Milan Fashion Week 2013. Following the debut at Fashion Week, Araki’s window installments which can be viewed to the right and left will be placed within over 70 stores worldwide.

Gucci’s creative director Frida Giannini had this to say on the topic of Araki’s window installments:

“I am quite sure his window installations will stop people in their tracks in cities around the world as they immerse themselves in the fabulous fantasy world he has created.” 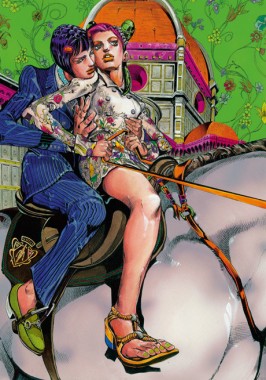 Araki himself responded after citing his love and fascination with Italy and the Gucci brand:

“Frida’s beautiful Cruise collection with its strong colours and graphic designs set my mind racing the moment she showed it to me. From there the characters and storyline came into being so naturally. It was very stimulating to work together on this project.”

What do you think of this bizarre collaboration between Hirohiko Araki and Gucci? Let us know what you think in the comments section below.