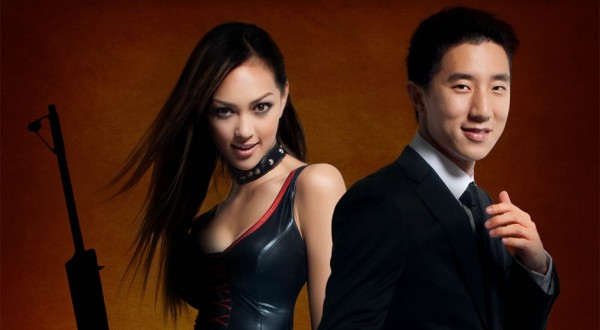 ‘Double Trouble’, the 2012 starring vehicle for none other than Jackie Chan’s son, Jaycee Chan, will be released here in Australia and New Zealand on March 13th on DVD and Video On-Demand.

Jaycee plays the role of a Taiwanese security guard named Jay, who gives chase after some thieves whom he failed to prevent from stealing a 400 year old painting. With the thieves being hit-girls in stilettos, Ocean, a Beijing security guard on holidays, misinterprets Jay’s pursuit and interferes.

The two security guards then find themselves buddying up to track down these cat burglars. And so a trademark Chan family buddy cop story has been set-up. David Hsun-Wei Chang, who also directed ‘Let the Bullets Fly!’, has attempted to pay homage to older action films whilst working on developing an understanding for these characters’ camaraderie in this somewhat outlandish situation.

The DVD will have both Mandarin/English audio tracks and subtitles and will retail for $32.95, courtesy of Vendetta Films. Intrigued to see this legendary lineage continue? Then maybe you should check out Double Trouble.

Pusher Comes To DVD In March