At a preview event earlier this week, us here at Capsule Computers had an opportunity to sit down with the Communications Manager of Metro Last Light, Jeremy Greiner. During our chat, we discuss the upcoming Metro Last Light video game and take a look at some of the workings behind the games technical engine and more.

We have, in the past, interviewed Jeremy before. You can see our Video Interview with him for Darksiders II here. You can also check out our preview of the game at this link. It looks like an excellent follow up to Metro 2033, check it.

Could you introduce yourself to everyone at home?

I am Jeremy Greiner, Communications Manager on Metro Last Light.

So today we’ve taken a little of a look of the game and seen a few of the levels, could you tell us a bit about each of the levels and their significance?

What we’re really trying to do is show a rough vertical slice of the game. So we wanted to exhibit some of the cool things that exist in the game, establish some of the world and the atmosphere and show it to you guys. So We started in Camp 2, which was to show Human to Human combat. You had the choice to choose between stealth and gunplay. Alternate routes through to try and work out which best suits your playstyle, or if you need to manage your resources; which you will need to do in this game to save ammunition – there are different ways to do it.
I demonstrated a lot of improvements to the AI system, a lot of improvements to the controller mappings and where things live on the screen and obviously you saw that we’ve kept true to the Metro experience and it’s up to the User to find their way through, we don’t have all these things blinking on the map and mini-maps and all these UI pops and all these HUD elements too to make things easier. It’s challenging for a reason and I’m glad 4A have stuck to that.
Do you want me to jump into the next level? So the second level was called Venice, which was one of our station cities that fans of Metro 2033 will recognise. That’s to show the world and how life still exists and a lot of choices that you can make a as player.
The final level was Swamp, which was all above ground and out doors.  With a lot of mutants all over and it was very much survival horror and with a lot of tension and you’re not sure where you’re getting attacked from. It’s core representation. The only thing we didn’t really show off was horror within the Metro where you’re kind of creeping in the dark, but there’ll be a lot of that I’m sure.

In comparison to the First Metro, has the AI been improved or is it the same or?

Vastly Improved. It’s been one of the key focuses, in fact the team is going in and debugging ti now. As I mentioned there are various alert states now, there are retreat mechanics, ssurrender mechanics; they never go back to an idle state when you raise an alarm, like when you raise there awareness. Even to the extent of if they’re unaware that you’re there and you kill them they drop quick, whereas if they’re aware they have adrenaline in their veins and they don’t drop as quick. 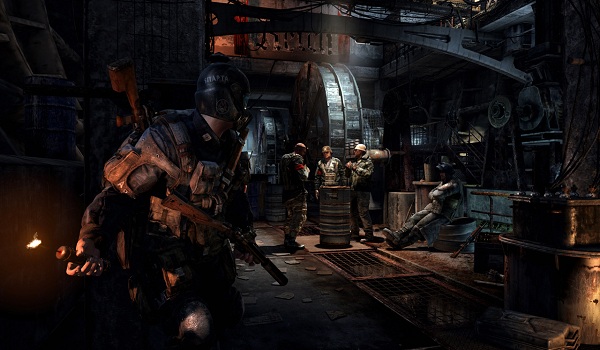 What are the differences between the difficulties?

The key differences are that they AI are going to be more accurate and do more damage. As you go up the difficulty tree, the more simulated the experience will become. Like not a virtual sim, but they’re trying to deliver on the atmosphere and immersion and simulating that is something really cool. And as you go up the difficulty curve it’s going to become more and more realistic.

As you go up in the difficulties, does it add more enemies or just more smarter and accurate?

Like I mentioned before, its not like it’s a Congo line of dudes that just keep coming and coming and coming and coming because I haven’t hit that invisible barrier and then they stop. There’s a finite number of people living in the Metro (that are still killing each other, I guess we didn’t learn our lesson) but that’s how it goes.

When we saw the game, it was incredibly pretty. Was this build at maximum detail or is there a prettier setting?

I can tell you right now that I grabbed this build on December 3rd and it his not gone through a  polished phase. I showed you guys the laptop I’m on, I’m on an Alienware laptop with, I think an nVidia 500 series card, its not a  super-cool super computer. The engine 4A created, the 4A engine it sings, it just sings graphically, absolutely sings. And we’re going PC to TV here and it looks graphically pretty because that’s what the game is and its amazing at what the engine and studio can do.

Could you run us through some of the unique things about the engine?

The 4A engine is a proprietary engine for 4A. They can do improvements and changes in real time, there’s a lot of engineers there, a lot are from what we call the old world. There’s destruction, there’s dynamic weather, dynamic lighting. If there’s lighting in the area it’s because there’s a light source, not because there’s a god light source coming from above. The engine can slow down and speed up the game, which I showed you guys, which is really cool because when you speed up the game things still stream in. Like normally when you’d have textures stream in at that speed they’d usually be like flat and grey boxes almost, so yeah the ability that they have to put all the detail into the world, the engine is really decorative. 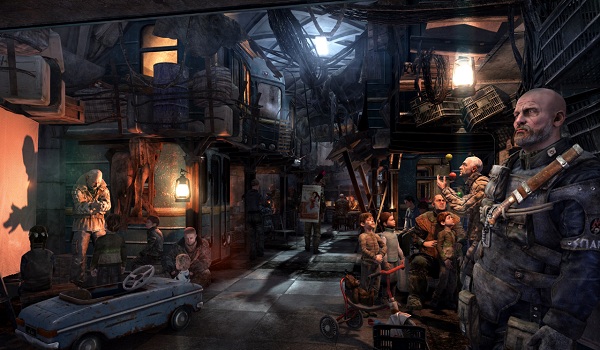 The weapons have a lot of detail in them, was there much research that went into their designs?

It’s incredible, most of the weapons in this game are handmade weapons and actually the engineers prototyped them out, sketched them out, did the math behind it, the physics behind it, to make it worked in real life. So yeah a lot of effort went into that to make it realistic. Again it’s just that incredible level of detail concerning everything in the world that makes it the experience that it is.

So obviously the first game is adapted on the 2033 Novel, is Last Light based on any sequel novels?

Dmitry Glukhovsky wrote 2033 and we adapted that into the video game. Dmitry and 4A obviously talked about 2034 which he wrote, and decided that taking the path from 2033 where Artyom destroyed all the Dark Ones was a great way to take the game franchise and decided to create an alternative story in succession to 2033. It was collaborative between the author and the studio and they all unanimously agreed.

It’s about time to wrap this up, are there any closing comments about the game you’d like to share?

I think for a guy like me, just to be frank, I work on more of your traditional shooters; more of your run and gun, more of your action packed set piece ones. This experience, working on this game, and I’ve only been on since September, has been pretty enlightening for me as just a gamer. Not professionally, but as a gamer. Because, you know, I think everyone who plays this game is going to have a kind of “Aha” moment with this game where you ask yourself ‘Why am I doing these things on a certain way”? Because I think at some point you’re frustrating and it’s like “why can’t I do this?” and then you start realising that its because “I have to do this and this”. And then you realise “why did I do that before” and you start questioning your own behaviours and I think that we’re all so preconditioned now to play shooters a certain way that it’s super-super refreshing to be challenged to think differently. I think that’s what your viewers or readers should be taking away from this.

Thanks for your time.