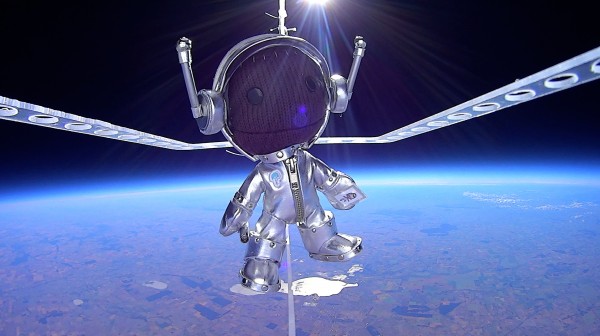 Sackboy’s journey to the ‘sackosphere’ (stratosphere) has been completed as Playstation Australia’s Project (Near) Space came to its end today. Sackboy’s meteorological balloon was filled with five cubic metres of helium, expanding to a 30 foot diameter and soaring to 95,000 feet before popping. The launch team made sure they could follow the journey by fitting the flight rigging with GPS and wireless modules, capable of tracking Sackboy up to 32 kilometres. Sackboy zoomed upwards at over 15 feet per second as a north-north westerly breeze pushed him up to speeds over 90 km/h. Racing through fields to Sackboy’s landing zone, they found him safe and sound in a wheat field over 69 kilometres away from the launch site, which was 50 kilometres outside West Wyalong.

As part of Project (Near) Space, over 1000 fans participated in the social media initiative and were able to use strategic clues and tips provided on PlayStation Australia’s Facebook page to locate where Sackboy would land. Sackboy suit for the trip came from the fan’s own design submissions for his maiden voyage spacesuit. The winning design from Tom Fox, which you can see in our gallery below. Make sure you also check out the videos of his trip (the first video) and a behind the scenes look (the second video).