General consensus says that a game’s controls should be relatively simple.

General consensus says that players should be empowered.

General consensus says that a game where you complete mundane chores would be uninteresting.

Octodad shouldn’t work. Its controls are awkward and overly-complicated, and it makes completing the game’s boring tasks an ordeal.

It would be a terrible game, were it not so deliberate in flying against this “general consensus” jerk. I hate that guy, and apparently so do Young Horses, the indie studio behind this closet cephalopod.

The reason you struggle with even the most basic human movements is because you’re an octopus in a suit. Suddenly, washing the dishes, putting your daughter to bed, or even just walking upright become hilariously challenging. 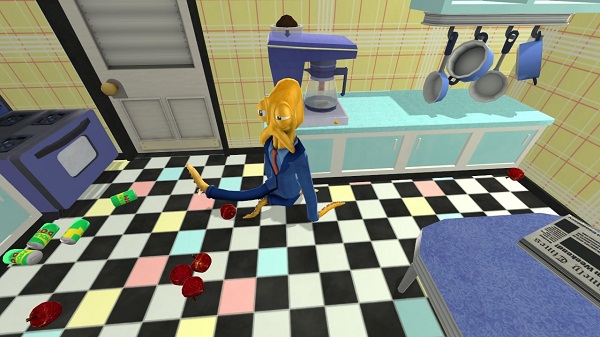 Octodad began life as a student project, but a full release, titled Octodad: Dadliest Catch, is hopefully headed to Steam next year, through the new Greenlight program.

The story is simple and nonsensical: you’re a self-proclaimed “secret octopus”, trying to maintain a cover as a mere civilian, avoid suspicion from your human family, and continue to work in your underground lab of unexplained purpose – all while being hunted by a determined sushi chef who sees through your disguise.

Don’t freak out when the screen explaining the controls first pops up. It doesn’t make a lot of sense at a glance, but you’ll pick it up as you play. Eventually. 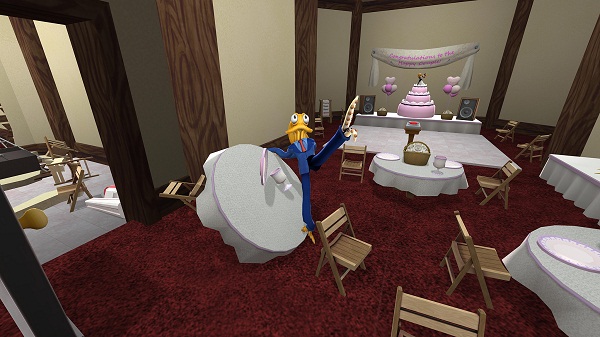 A tap of the Spacebar swaps control between the legs and the arms. In Arm Mode, moving the mouse flails the arm-substitute tentacle around, holding the right button raises or lowers it, and clicking the left button will make it dart out to grab an item. Left-click again will drop or throw the thing.

The result of this complex input method is slapstick hilarity. Octodad spins, stumbles, falls and knocks over valuables as he tries to keep his cool and nonchalantly walk in a straight line. Picture QWOP, in 3D, with eight limbs and a house full of physics-sensitive objects.

You know what? Written descriptions really don’t do the game justice. Just watch this gameplay video.

…And that demonstrates a very well-controlled Octodad. You’re not that smooth. You’ll flop around in the corner for a while first.

Go on, prove me wrong. Download the original game for free, and show off your moves.

Octodad vanilla is a little rough, but you won’t even notice: it’s too much fun slithering around your cephalo-protagonist’s living room, knocking over furniture and knick-knacks that his poor human family must be constantly straightening up.

Then be sure to vote up Dadliest Catch on Steam Greenlight, because this experience needs to be shared.

Octodad is effortlessly entertaining at a mechanical level, and with Dadliest Catch’s charming coat of paint, its future status as an indie darling is all but guaranteed. We’ll definitely be keeping an awkward tentacle on the pulse of this patriarch from the Pacific.