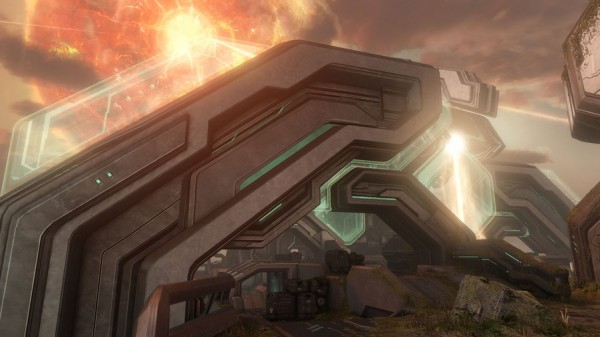 A new map for Halo 4, has been revealed this past weekend. The map is titled Solace and it looks to be on a planet that is currently being glassed. Some other things you can see about the map, it is symmetrical and is designed for 4 vs. 4 team slayer matches.

Solace’s symmetrical design recalls lines, views, and positions from Narrows, the classic map from Halo 3. From some gameplay that has been shown, the opening spawn points on the platforms on opposite sides of the map resulted in fast DMR head-shotting starts, and provided set-ups aplenty for sniping while offering a short enough run to the center – which circles a second sub-level – to ensure quick CQC pile-ups with every spawn. The verticality of the map makes it equally suited for Jetpacks and Thrusters, though the caves at the tail ends of each base, and the lower level, keep things on the grounded in spots without much room for an easy escape.

You will be able to play this map and nine others when Halo 4 releases on November 6, 2012, exclusively on the Xbox 360.