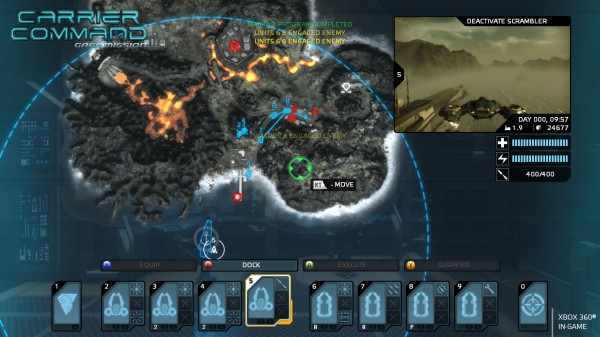 Carrier Command: Gaea Mission is the modern take on the classic Carrier Command game from way back when. It is a game that easily combines strategy elements with some amazing action filled gameplay and some even cooler looking visuals. It’s obvious that the team behind the game must have been fans of the classic, considering the amount of care that they’ve taken to create an excellent follow-up to an old favourite. In this preview of an unfinished build of the game (version 0.7.x IIRC) we take a look at how the game is currently looking.

For those of you that are unaware of the Carrier Command legacy, it really doesn’t matter with this game. All that you really need to know is that there is a war going on and that you must use your limited resources intelligently in order to best your foes on the battlefield. However, I will admit, that the opening mission in the storyline is a little misleading as to the games actual content.

What I mean by this is that the opening level sees you running around mostly on foot through a bunch of scripted and predetermined parameters that almost reflect negatively on the game. However, this quickly changes once you head inside some old station of some kind where the game starts to feel a bit more like Doom. Not so much with the whole demons killing everyone thing, but more with the general atmosphere of the level. Fortunately this opening level is pretty quick and sees you capturing your Command Carrier, your portable base that you take with you to capture islands and defeat enemies. 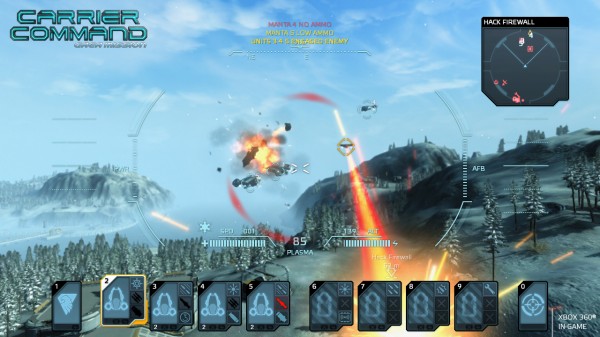 Now obviously the game is called Command Carrier, so it’d be a bit suss if you didn’t at least encounter one right? Well in this game, you capture one and then you sail it to conquer the world. It’s actually quite impressive with the things you can do with it. For one, it’s a Carrier ship; which means that it can carry units. This is important for later when you’ll be invading other islands within the game. It’s also a portable research station and a losing condition. Don’t let it die.

If I was to liken this game to another game, it would definitely be to the old Battlezone (IIRC) games. This is because of the similarities in play that the games share in common. For example, as anyone who has played Battlezone will tell you, vehicles are plenty important to use in capturing points. In Carrier Command, this is no different.

In fact, in this game, it is much more beneficial to capture islands that can produce units than it is to destroy them and then rebuild them. Yes, in Carrier Command you have the option of simply destroying an islands command center, thus enabling you to place your own in the old ones spot, or you have the option to send in a hacking unit to simply take control over that islands command center, transferring all control over units and factories to you. 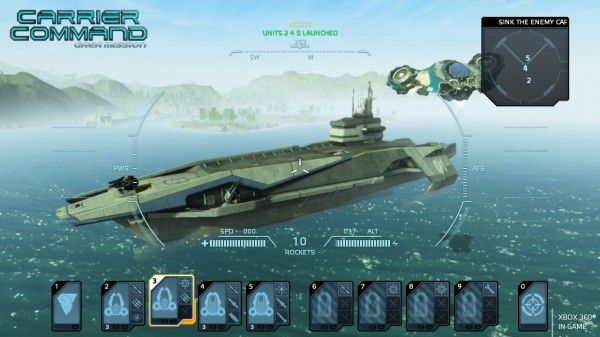 What’s cool with these units is that you can control some of them, whilst others are automated. For instance, you have a bunch of robotic drones guarding your islands that will automatically do their best to protect it against intruders. In fact, anything that you are not directly controlling can be attributed to some kind of AI guidance. For example, when flying in one of the aerial units, you can assign your three other ones to assist you in the sky. What’s even more fun is that you can automate some units and then control them whilst they’re still moving automatically. This can make for some interesting watching.

Apart from the main campaign, there is also a mode called Strategy Mode. In Strategy Mode, players pretty much play through the game without a storyline. What happens in this mode is that you start with your Command Carrier and you must capture and defeat all of your opponents islands. When I first went into this mode, I figured, you know, it’d only take a few hours to do. Nope. It’s long. This is a good thing.

I think that having a second gametype with a serious amount of longevity is a good thing for a game to have. I mean, what kind of fun could you have just bum-rushing through a strategy game where you have to outsmart your opponent? Not much. Having things take time gives players some room to actually plan and strategise; which is a lot more fun than a rushed and assured victory each and every time.

Visually this game is looking pretty decent. For some reason I don’t think it’s doing that distance blurring effect thing properly, but everything still looks pretty amazing. I’m not going to lie though, the game does not stress the PC any visually. In fact, my current two year old PC cake-walked the game. This, however, does not mean that it is a visual atrocity. It just means that players expecting something like Crysis-Field-20,000 will be disappointed.

Overall I’m actually quite pumped to see how the full version of this game will turn out. As a preview pre-release code, it is incredibly fun to play and aside from a bunch of bugs that are likely to be ironed out before release, I’d say that this is definitely one of those games that you’d have to at least play once or twice. However, the Strategy Mode will have you returning for more and more. Be sure to check out this game when it hits the Xbox 360 and PC later this year.