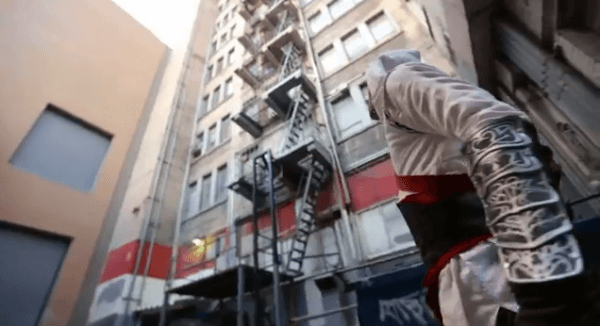 Have you ever wanted to see an assassin in action out in the real world and not just in a video game? Well now you can. Ronnie Shalvis, a professional user of Parkour a “traceur” has made a short video showcasing his amazing physical ability while dressed as Ezio from Assassin’s Creed. For anyone out there who doesn’t know what Parkour is here is a brief description.

A physical discipline of movement focused on overcoming obstacles and a method of training the human body to become stronger, more agile and faster, while remaining efficient and able to move freely to pass diverse obstacles by combining a variety of movements such as running, climbing, swimming, vaulting, leaping and rolling.

Now doesn’t this sound exactly like what Altair and Ezio from Assassin’s Creed do on a regular basis?  I believe so, and by checking out the video below you’ll also agree with us to. If there was to be an Assassin’s Creed movie would Ronnie Shalvis be the perfect man for the job?

Check out video down below