A mate summed up DayZ pretty well: “it’s half boring grind, half exhilarating nightmare.” There’s no avoiding either element, but to get the best of both worlds, play with friends. That way, they can keep you entertained, narrating their adventures while you spend ten minutes crawling through a paddock.

While I was (again) hopelessly lost in the woods somewhere near Kamenka, my mate Adam narrated the following escapade over the headset:

As the sun was setting, I slunk into an apartment complex north of Cherno, to rendezvous with a friend. The friend had been wounded in a firefight earlier and needed a blood transfusion pretty badly. Being new to the game, I decided a roadflare might help her find the particular apartment a little easier in the darkness, so I cracked one and hurled it onto the road outside. The roadflare only acted as a beacon for stray gunfire, hordes of zombies and bandits. 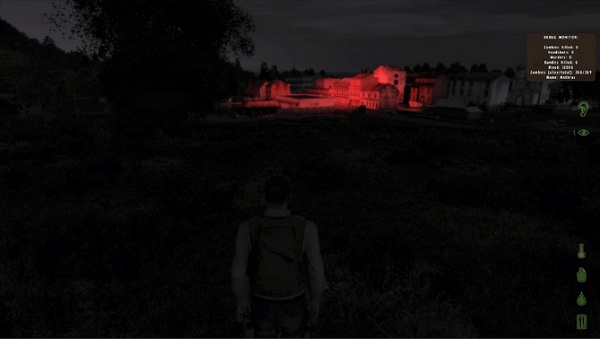 After waiting for what seemed like a lifetime for the flare to die out and my friend to arrive I was beginning to lose my nerves, huddled on the top floor of the apartment, in the dark, in a neighborhood now crawling with danger. Suddenly, and to my horror, three cars roared into the street below my apartment complex and came to a halt. I had never seen a single car in action – never mind three at once. I counted eight heavily-armed survivors pour out of the cars in what looked like practiced formation, and start to crawl through the adjacent buildings for supplies. I knew if they found me – and at the rate they were going, they would – there’d be no yelling ‘friendly’ or waving the white flag.

Terrified, I decided to GTFO and fast. I crept down the stairs and made straight for the first car. I leapt into the driver’s seat and without warning the engine came to life and the headlights illuminated the whole complex. Fumbling with the controls, I found the accelerator and floored it, just as automatic gunfire started tearing through the chassis and windows. The cars behind me roared to life and took chase but I’d already gotten a decent lead. I pulled off onto the highway and hurtled through the night at full speed, dodging debris, stray wire and zombies.

As I reached what I assumed was Elektro, still reeling from the escape, I was hosed with bullets through the windscreen, veered off the road and headfirst into a tanktrap. As I pulled myself from the wreck, legs broken and bleeding badly, I saw the bandits closing. Barely staving off unconsciousness, I bled to death as they went through my pockets.