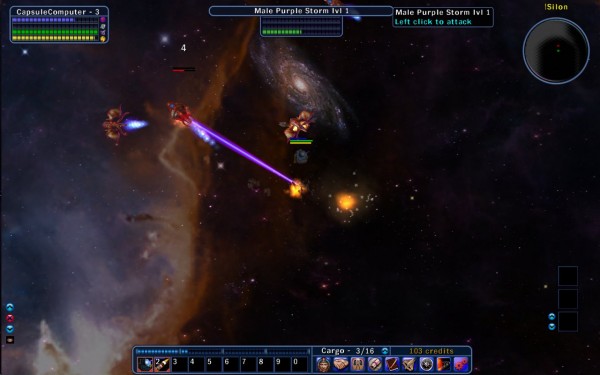 With the exception of simulations, RPGs are often the most in-depth games on the market.  Space RPGs even more so as each component on the ship can be changed out for better versions.  Well, there is a new space action RPG hitting the market called Drox Operative and Capsule Computers has a preview for its special features.  A different kind of space RPG the main goal isn’t to forward the player’s own Drox race to rule as king, but instead take the role as king maker whittling the galaxy down to one race who is hopefully allied with the player.

The first thing you notice when you load up the game is that there a lot of options from the get go, with 10 different ships to choose from.  Because of this, it’d be really good to have an idea of how players are going to go about the game.  But, besides just having different stats, the ships in the game do a very good job at looking drastically different and keeping the looks with how each race is personified.  Needless to say the game is designed to accommodate plenty of different play types right from the get go.  For advanced players, when they eventually get there anyway, there are other options as well to try and give a bigger challenge, from Poverty with finding less money and components, to Semi-Hardcore where every death costs some of the ships most basic health, to Unlucky so that there are no rare components, to Hardcore which is one ship one death even being locked until reaching a higher level.  These provide even more variety of play, so that players can really test themselves. 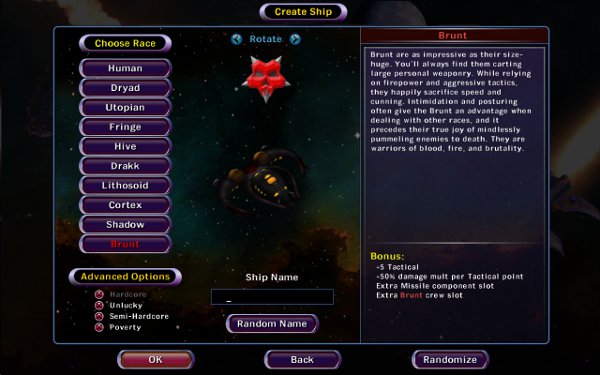 After getting the ship all set up, it’s simply a matter of setting up the galaxy.  How many races?  How many systems in the galaxy?  These can all be set up, so that players can find just the right challenge for themselves.  Pick plenty of races and there are most sides to play against each other, pick a few and enjoy a more focused game.  Pick a small galaxy and limit the planets for the races to colonize, pick a huge galaxy and give them space to grow before turning them against each other.  Between just these two options there are plenty of ways for the game to play out, not to mention that which races are randomly picked to be present will impact it as well.

So the Drox operative has a ship and is now set loose on a galaxy to shape how they want.  Now comes the toughest challenge yet, learning to play the actual game.  There’s a decent learning curve as there are plenty of aspects to running a ship, plus combat, plus leveling, plus cargo, but that’s really to be expected.  The unique parts of the actual gameplay is in the relations between other races.  Sure there are quests that let players get on the good side of a race, but the true depth is in the Propaganda, Espionage, Sabotage, and Rumors the Drox operative can create.  Each can be either Quick, Planned, or Well Crafted with each having a better chance at being better effective as well as costing more money, though it would be nice to see just what the percentages of success for each option would be.  These are really where the true power is, anyone can go in and blast a race into dust, but a true master can undermine the race as a whole and tear them apart while seeming friendly.

These options add a considerable depth to the game and give even more options for players truly trying to role-play the game.  Maybe their Drox doesn’t sabotage, or only spreads rumors, or even only gains technology through espionage, the ability is all there for players though will have a considerably bigger impact on their Drox pocketbook.  The first time through it is very easy to mess it up, so it’s nice that even though winning would be a hard uphill battle, there’s fun to be had messing up all the races.  Up until they all just get mad and try to to kill you.