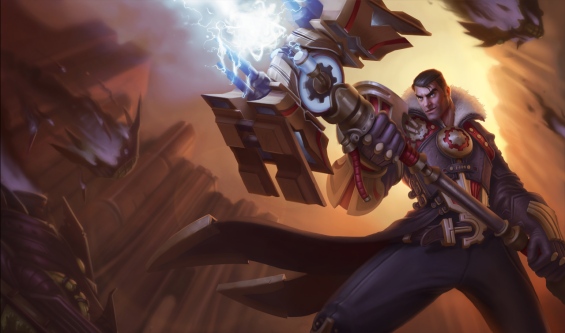 Riot Games has brought a truly diverse warrior to life with Jayce – the Defender of Tomorrow. Wielding an altering weapon, Jayce can quickly adjust to the changing needs of battle by switching between a Mercury Hammer or Mercury Cannon. With ranged and melee abilities, Jayce can transform into whatever is needed on the Plains of Justice. Are you ready for this brand new League of Legends champion?

Active: Jayce creates a field of lightning damaging nearby enemies for several seconds.

Jayce has become well-known as one of the best inventors of Piltover. He has gained the love of his people through charm and wit of developing inventions for his city’s use alone. However, Jayce has faced many trials as an inventor and nearly doomed his people. His laboratory was raided by an increasingly interested and devious Viktor of the Zaun. Knowing well that the mad scientist would use his own plans to create evil, Jayce went to work on his greatest creation – the Mercury Hammer.

The warrior of Piltover charged into Viktor’s lair making easy work of the mad scientist’s acolytes. The power of the interchangeable weapon caused some of the minions to flee rather than to fight. Even Viktor himself fled the once sanctuary of his own lair. After the short confrontation, Jayce made little work of the diabolical creations and returned to Piltover as a hero. Jayce knew well that his actions may have started a war, but he remains willing to fight for Piltover no matter the cost.

– Check out Jayce’s Champion Spotlight in the video below to catch the hero of Piltover in action.