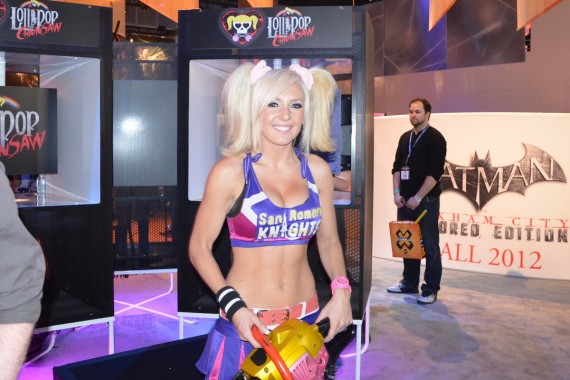 The Electronic Entertainment Expo or E3 for short is a place where the world’s best video game companies gather each year to show off their latest soon to be released video game titles to the world.  Everyone tries their utmost best to one up each other with who has the best games.  But games are not the only thing that some of the Companies like to show off!  This year a number of companies also used models to give their games that extra push to get people to try out their titles at the show.  Of course if the game is good it should sell itself, but then again when you have a beautiful woman or many women dressed up as a video game character, it puts that extra bit of love into the game.  Take for example the lovely Jessica Nigri who this year dressed up in her world famous Lollipop Chainsaw outfit, not only did the crowds flock to take a photo with her(myself included), but they also tried out the game too, which I must say is quite as entertaining as taking a photo with Jessica!

For your viewing pleasure we have organized and collected all of this year’s E3 2012 Booth Babes.  You can check them out below in the gallery or jump on over and check them out in our Facebook E3 2012 Booth Babes gallery (click here to view the gallery in Facebook)  Let us know who you think was the best dressed booth babe this year and what company you believe had the best booth babes at their booth!