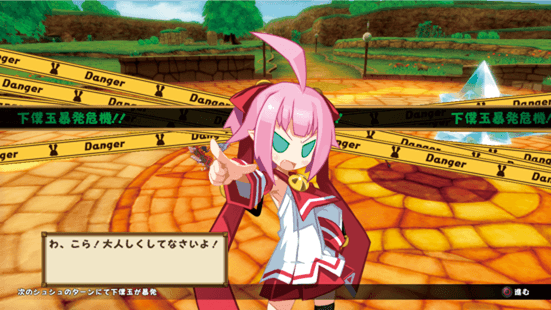 NIS America may not have had a large presence at E3 this year, but what they did show off was probably the most outrageously hilarious title that you could find on the show floor. You may remember a few months ago when NIS America revealed that they were planning on bringing Mugen Souls over to North America and that was the exact title they were showing off on the floor. Now the build presented to us wasn’t entirely translated into English yet, though nearly all of the characters’ names and dialogue was fully in English in the presentation.

Now when I began playing Mugen Souls I chose to begin with one of the pre-set save files which dropped me in the middle of a dungeon area with monsters roaming about. On this dungeon exploration screen, players will see various enemies roaming about and will enter into combat with them if they touch one of these enemies. As with past titles from NIS, players can also gain a first strike advantage by striking the enemy to enter combat. Interestingly enough, it also appeared that there are random encounters as well in these dungeons, as my first battle occurred out of thin air.

As I entered battle I could almost immediately tell that Mugen Souls was a game that doesn’t take itself serious in the slightest, presenting hilarious actions even in combat. Now the game’s character designs in the exploration segments as well as battle can best be described as chibi. These chibi designs work heavily in the game’s favor however, thanks to the various zany and off the wall combo attacks that the player will be using quite often. Now Mugen Souls features a fully traversable turn-based battlefield, with players able to move their party members a certain distance and then attack enemies which are in their attack radius. 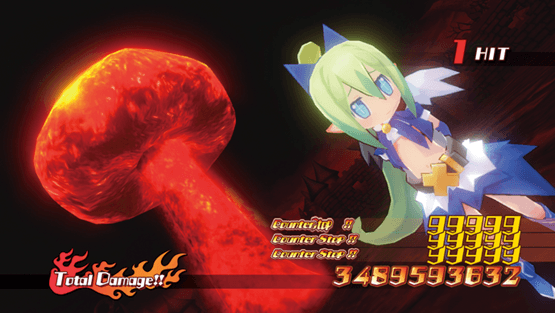 What makes this mechanic interesting is that Mugen Souls uses the same type of combo attack system that the Disgaea series is known for. During my fights with various enemies, the main character Chou-Chou, her peon Ryuto and ally of currently unknown relation Altis would occasionally team up for these combo attacks which ranged from shooting the attacking player out of a large slingshot, allowing them to do a flying headbutt into the enemy then burying their head into the ground and getting stuck, two attacking characters flying up into the air and slamming down onto the enemy in multicolored dustclouds to deal damage and even an attack where one character held onto the enemy while an ally swung a large hammer around, hitting both the player and the enemy at the same time. This crazy attack system seems like it will keep practically every encounter fresh and exciting, because you can literally never guess what will happen next.

Now the battle screens were unfortunately not translated for this build of the game, but it appears that players can use various skills to deal out damage to enemies as well as items at any time to heal, cure status effects, deal damage and more. Also available to the player is a mechanic exclusive to Chou-Chou, where she will perform various cute poses (with normal character artwork like what is presented during conversations, not chibi designs) to try and sway her opponents to joining her side as peons. As mentioned before, the menus were not translated fully so I was unable to understand a large amount of this mechanic though players will apparently select from a couple of options before performing the cute poses. 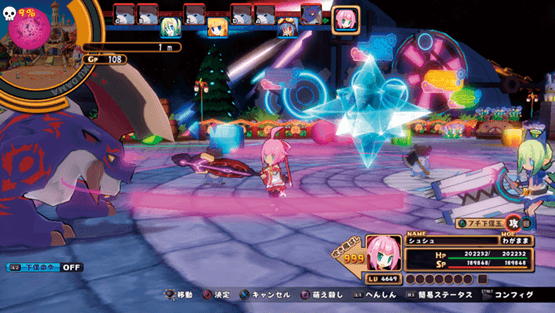 Now there is much more to Mugen Souls than battle of course, as NIS America had plenty of story dialogue fully translated. Now the dialogue was not given English voice acting at this time, but I was assured that the title would feature full English voice acting as well as the Japanese track for those who prefer that option. Whenever the characters talk whey will do so in visual novel style, with the speaking characters having partially animated portraits. The artwork on these portraits is quite impressive and much of the dialogue I was able to see was quite hilarious in nature, as it involved a mysterious untranslated character literally mentioning the fact that he was grinding levels to become stronger, and even Chou-Chou sneaking into a princess’s bedroom and Ryuto talking about stealing her panties or smelling her bedding.

Mugen Souls already looks like it will be a game that no one will ever forget playing with just this preview build alone. When the full title is released later this year on September 18th, it can only become even crazier. In fact it might just claim the title as the most ultimately crazy RPG of all kind.

New game in development for the Mugen Souls series