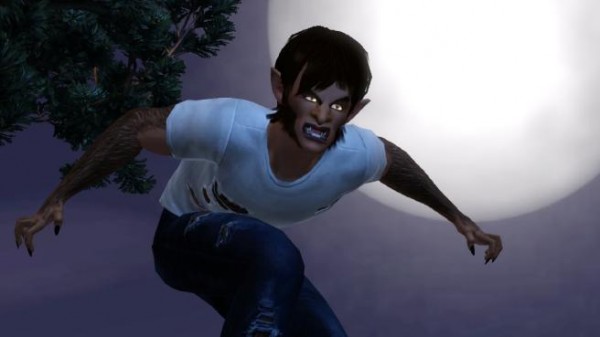 EA has announced some new information about the upcoming Sims expansion pack, The Sims 3 Supernatural, about the addition of werewolves to the Sims universe.

In the game the werewolves have the most turbulent lifestyles, going from a normal life, to getting super strong, emotional and totally unpredictable. Who else thinks this will lead to a lot of desperately trying to cancel an action?

Werewolf Sims possess the ability to morph between human and wolf form, either by will or an uncontrolled transformation due to low mood or the rise of the full moon. This will not cause them to turn into a full wolf, but their features will definitely become more wolfish, with some pretty hectic body hair, a more animalistic face, and claws from the fingertips.

While werewolves are intimidating and indulge in some pretty inappropriate behaviors, they also have a sense of honour that stops from them recklessly spreading the curse, and they can also develop their lycanthropy skill and reduce their uncontrolled transformations and increase their hunting prowess.

Don’t worry, having a werewolf won’t limit your options for having kids. You can either have kids with other werewolves, or normal Sims, which will mean there’s a 50/50 chance of your child being a werewolf. Look out for such wolf-like behaviour in toddlers such as howling, scratching and practice hunting. Then, as they become children they will behind to transform between human and wolf form, and when they become teens they will inherit all the positives and negatives.

The Sims 3 Supernatural is coming out on PC and Mac in September. Stay tuned to Capsule Computers for more information as it comes out!

Get Controversial With These Dante’s Inferno Achievements